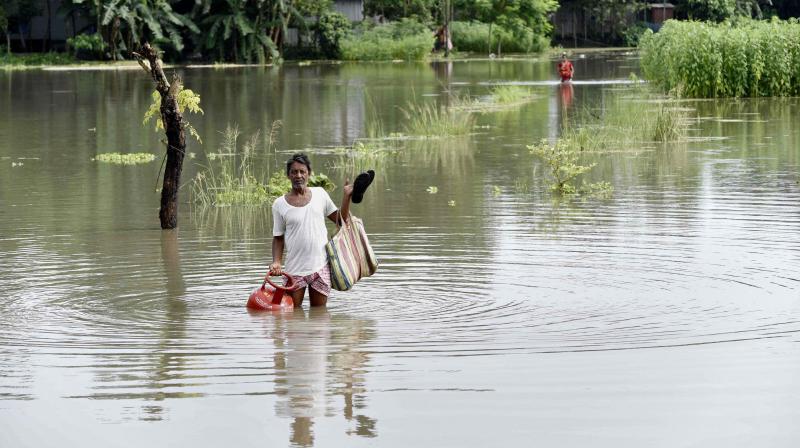 A villager carries a cooking gas cylinder as he wades through floodwaters at Jania village in Barpeta, Assam, on Saturday. ( PTI)

Guwahati: Amidst the alert of heavy rains, the flood continues to wreak havoc not only in Assam but also the hill states of Meghalaya and Arunachal Pradesh.

Assam chief minister Sarbananda Sonowal on Saturday spoke to Union home minister Amit Shah and briefed him about the flood, which has affected more than 8 lakh people of the state.

Mr Sonowal also informed the Union minister that floodwaters have submerged vast tract of land in several districts of both Brahmaputra and Barak valley of the state and the administrations have been geared up to tackle the situation.

Chief minister said that he himself was monitoring the prevailing flood situation and frequently interacting with all the deputy commissioners and officials of different departments.

Mr Sonowal said that all ministers of the state government, MPs, MLAs, panchayat and other public representatives have been urged to guide the administrations and take part in relief and rescue measures.

Mr Sonowal further informed that 24x7 flood control rooms have been activated and government officials are rendering required services to the marooned people. He also briefed the Union minister about relief and rescue operations being carried out in different flood affected areas of the state and medical services provided to the flood hit.

The flood has started affecting the wildlife of the state as well. Despite the measures, like imposing prohibitory order on the NH-37 in Kaziranga National Park area, a hog deer was killed in a road accident in the national park on Saturday. According to reports, the deer was hit by a vehicle, which escaped from the scene after the accident.

Park authorities said the deer was killed at the spot when it was trying to cross the road.
In the view of the current flood situation in the Kaziranga, the district administration promulgated Section 144 over NH-37 to save the animals and reduce man-animal conflict within the park areas.

Due to rising water levels, wild animals are straying into higher grounds in the park while many are crossing over the NH-37 to reach highlands in the neighbouring Karbi Hills district.

The heavy rainfall and floods have shattered the normal life in frontier state of Meghalaya also, where one of the most popular destinations of tourists — the cleanest village in Asia, Mawlynnong, has been inundated in floodwater.

Mawlynnong has been inundated with floods blocking the visit of tourists.

Meghalaya chief minister Conrad Sangma assured that all necessary measures will be taken as a precautionary intervention in the wake of flood in plain belt areas of the hill state.