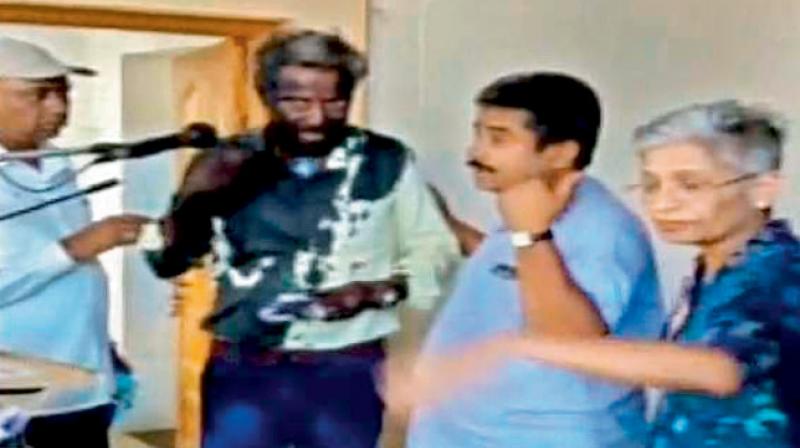 Yogesh Master was attacked by eight or nine persons who smeared his face with black ink and fled.

Bengaluru: Davangere police on Monday arrested two people in connection with the blackening of the face of a controversial writer, Yogesh Master, at a function held in Davangere on Sunday. The arrested, Shivaprakash and Chetan, reportedly belong to the right wing Hindu Jagaran Vedike.

The incident occurred when Mr Master was having tea at a road-side shop near Bapuji Dental College, after participating in the 82nd birth anniversary of noted Kannada writer and journalist P. Lankesh. The function was organised by Gowri Lankesh Patrike at Kuvempu Kannada Bhavan.

The two accused came on a two-wheeler and smeared Mr Yogesh’s face with the black paint for defaming the Hindu gods and goddesses in his novels.

Observers saw a political angle in the incident, and were apprehensive that such incidents would continue in the run-up to the state Assembly elections to help right-wing parties gain political mileage.

This triggered a snap protest by progressive writers and activists condemning the attack. Based on the complaint, the Badavane police had registered a case and arrested the culprits on Monday.

Meanwhile, Chief Minister Siddaramaiah expressed shock over the incident and said that instructions had been given to the Davangere police to take stern action against the accused. The attack was against the freedom of expression and the government would not tolerate it, he said.

After the incident, Mr Master claimed that the two accused shouted ‘Jai Sri Ram’ before attacking him. His Kannada novel, “Dhundi Aranyakanobba Ganapathiyade Kathe”, had evoked widespread protests across the state four years ago, for portraying Lord Ganesh in bad light.