Third Indian tests positive for Covid 19 virus on board ship 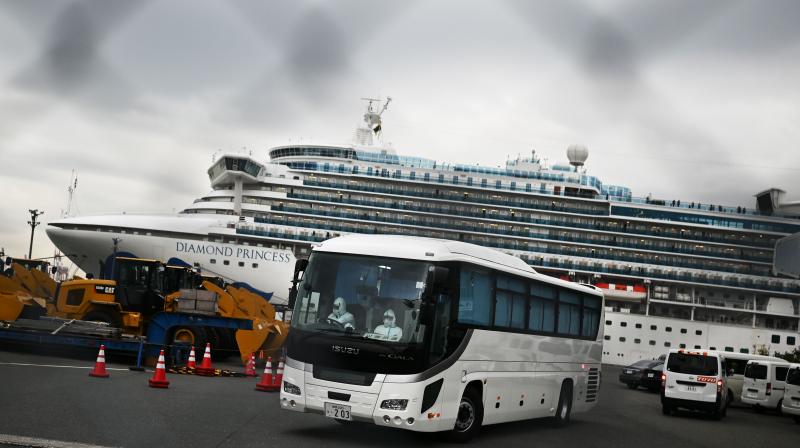 A bus with a driver wearing protective gear departs from the dockside next to the Diamond Princess cruise ship, which has around 3,600 people quarantined onboard due to fears of the new COVID-19 coronavirus, at the Daikoku Pier Cruise Terminal in Yokohama port on February 14, 2020. Japanese authorities were preparing February 14 to move some older passengers who tested negative for the new coronavirus off the quarantined cruise ship and into government-designated lodging. (AFP)

Tokyo: A third Indian crew member on board the cruise ship Diamond Princess off the Japanese coast has tested positive for the novel coronavirus, the Indian embassy in Japan said Friday.

The authorities have confirmed that 218 people have been infected with the deadly virus on the quarantined ship.

Diamond Princess with 3,711 people on board arrived at the Japanese coast early last week and was quarantined after a passenger who had disembarked last month in Hong Kong was found to be a carrier of the virus COVID-19 on the ship.

A total of 138 Indians, including 132 crew members and 6 passengers, were on board the ship.

The Indian embassy in a statement said three Indian crew members are among the 218 people who have tested positive for the virus.

"All 218 people, including Indian nationals, have been taken to hospitals for further treatment and quarantine. As per information available with the embassy, no other Indian national on-board Diamond Princess has developed any symptoms of infection," the statement said.