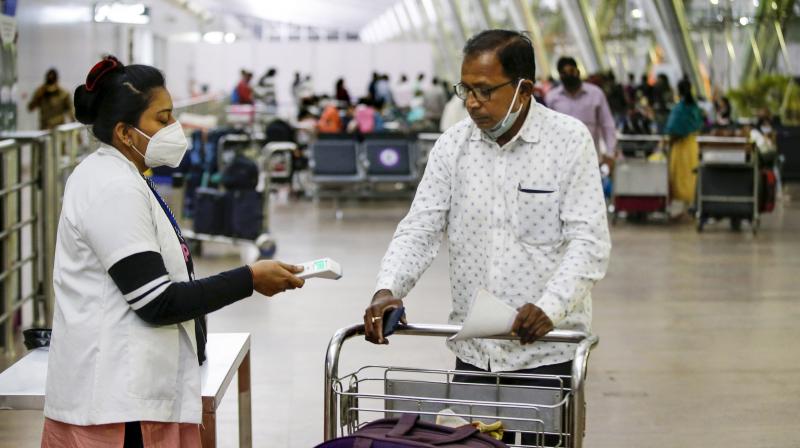 A  20-year-old man, who had arrived from Italy to meet his relatives, became the first patient in Chandigarh to test positive for Omicron. The youth, who is fully inoculated with Pfizer vaccine, is currently in institutional quarantine. His seven high-risk contacts have also been tested.

In Andhra Pradesh, a 34-year old foreign traveler who came from Ireland, also became the first patient  in the state to test positive for the new variant. The person, who first landed in Mumbai, was tested and found negative for Covid-19. He was then allowed to travel onward to Visakhapatnam on November 27.

"On conducting a second RT-PCR test in Vizianagaram, he tested positive for Covid-19. His sample was then sent to the Centre for Cellular and Molecular Biology in Hyderabad for genome sequencing and the result came out as Omicron positive," the public health director said in a release. The person, however, did not have any symptoms and a re-test on December 11 showed he was Covid-19 negative. "There are no other Omicron cases in the state," the director said.

So far, 15 foreign travelers who came to the state were found Covid-19 positive and all the samples were sent to CCMB for genome sequencing. "Of the 15, genome sequencing reports related to 10 cases were received and only one of them was confirmed Omicron positive," the director added.

Kerala’s first Omicron patient had returned from the UK via Abu Dhabi. State health minister Veena George said  the concerned person had returned to Kochi on December 6  and two days later he tested positive for Covid-19. The patient is a native of Ernakulam and is said to be in stable condition.

Another man who arrived from South Africa became the third person to be infected with the new variant in Karnataka, while a 40-year-old man tested positive after returning to Nagpur in Maharashtra from a West African country, taking the state's tally of Omicron cases to 18. This was perhaps the first case of Nagpur and 18th of Maharashtra.

In the past 10 days, cases of the “highly transmissible” disease have also been reported in Delhi, Rajasthan and Gujarat. Globally, the new variant has spread to almost 60 nations. The UK, Denmark and South Africa are the top three countries with the highest number of Omicron cases.

The first two Omicron cases In India were confirmed on December 2, almost a week after South Africa identified the new variant and raised the alarm over its rapid transmission.

India's Omicron cases offer a wide range of ages with even a one-year-old and a three-year-old having tested positive for the new variant. While the one-and-a-half-year-old girl has been discharged, the three-year-old boy is reported to be recovering.

India on Sunday reported 7,774 new  cases, 2.7 per cent lower than previous day’s figures released by the Union health ministry. This brings the country’s cumulative caseload to 3,46,90,510. Total recoveries were logged at 3,41,22,795 across the country.

In the last 24 hours, 306 people succumbed to Covid-19, increasing the total reported death count to 4,75,434. The maximum casualties were reported in Kerala (245), followed by Maharashtra with 20 daily deaths.