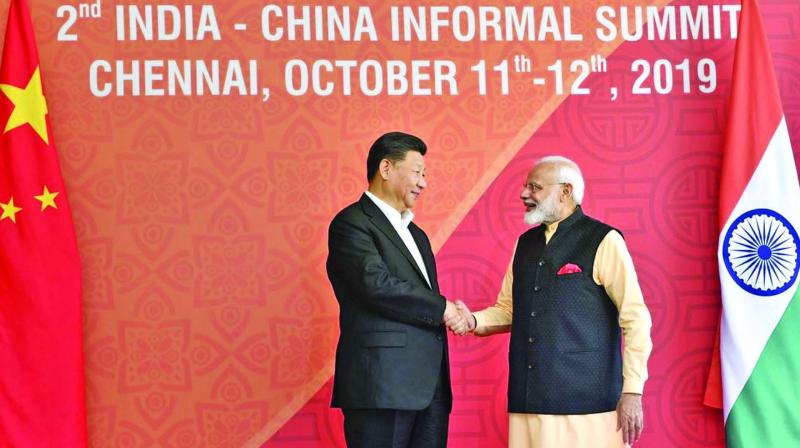 Mamallapuram: Prime Minister Narendra Modi and Chinese President Xi Jinping on Saturday agreed that the two countries will “prudently manage theirdifferences and not allow differences on any issue to become disputes”.

On the final day of the two-day informal summit — beingcalled “Chennai Connect” — at the sea-side resort town of Mamallapuram nearChennai, the two leaders also decided to “consolidate strategic communication”to prevent flare-ups on the border and enhance trust, as well as to establish a “newmechanism” to discuss trade, investment and services.

Differences between the two countries on the Kashmir issuewere “not raised or discussed”. However, briefing reporters after theconclusion of the second informal summit between the two leaders, foreignsecretary Vijay Gokhale said the Chinese President referred to the recentvisit of Pakistan PM Imran Khan to Beijing in his discussions with PM Modi.“Pakistan PM Imran Khan has visited China. The President of China talked aboutit. PM Modi heard him out,” he said.

“I would like to state quite categorically that this issue (of J&K) was not raised and not discussed. In fact, the Government of India’s position has publicly been made clear that this is a matter that concerns the internal affairs of the country,” Mr Gokhale said.

Though government sources had earlier indicated that India would raise the issue in case the Chinese leader brought it up, particularly since New Delhi had reacted strongly just before the summit to a reference to Kashmir in a Sino-Pakistani joint statement.

But now indications are that the two countries have decided to play down contentious issues to prevent any “fundamental disruption”, and instead concentrate on the larger Sino-Indian relationship. Both sides also agreed to work on additional confidence-building measures (CBM) on the pending boundary dispute.

“Both sides are quite clear on each other’s position on such issues (on Kashmir),” Mr Gokhale said, adding that India-China relations are not based on a single issue.

“In all relationships, there are issues... the fact that there are issues does not detract from the positive effect... in building a larger relationship,” Mr Gokhale said, and added, “Some of the issues are issues which pre-date these two leaders, these are historical issues. The way the relationship has been managed by our leadership has ensured that there is no fundamental disruption.”

PM Modi and President Xi began the main day of the informal summit on Saturday with a 75-minute one-on-one discussion followed by delegation-level talks that lasted 30 minutes. The two leaders again had a 45-minute one-on-one conversation over lunch after which the Chinese President returned to Chennai to fly to Nepal. On Friday, the two leaders had interacted one-to-one for five hours.

Significantly, for the second time in two days, PM Modi — sending a strong message domestically — praised the richness of Tamil language and culture, welcoming the Chinese President with a Tamil phrase. “A new era in cooperation will begin with the Chennai Connect today,” PM Modi said, in his opening remarks on Saturday.

The focus was on people-to-people exchanges in the backdrop of ancient trading links, with the two leaders “agreeing on establishment of sister-state relations between Tamil Nadu and Fujian Province, exploring the possibility of establishing an academy to study links between Mahabalipuram (another name for Mamallapuram) and Fujian province”.

The Chinese are apparently also keen that defence minister Rajnath Singh visits China. On trade, the foreign secretary said, “There was a good conversation over trade. China is ready to take sincere action and discuss how to reduce the trade deficit. The understanding reached was that a new mechanism be established to discuss trade, investment and services.” The Chinese side will be headed by their vice-premier, and the Indian side will be led by finance minister Nirmala Sitharaman. “There will be greater understanding shown on trade issues... It was decided to establish a mechanism at a high-level on how we can balance trade,” he said.

While PM Modi told the Chinese President it was important that the Regional Comprehensive Economic Partnership (RCEP) be balanced, the Chinese leader told him India’s concerns would be taken into account.

A statement issued by New Delhi after the summit, said, “The two Leaders had an in-depth exchange of views in a friendly atmosphere on overarching, long-term and strategic issues of global and regional importance... PM Modi and President Xi also appraised the practice of Informal Summits in a positive light as providing an important opportunity to deepen dialogue and to promote mutual understanding at the leaders’ level in line with the ‘Wuhan Spirit’ and the ‘Chennai Connect’. They agreed to continue this practice in the future. President Xi invited PM Modi to visit China for the 3rd Informal Summit. Prime Minister Modi has accepted the invitation.”

The statement issued by New Delhi said, “They (the two leaders) reiterated the consensus reached during the first Informal Summit in Wuhan, China, in April 2018, that India and China are factors for stability in the current international landscape and that both side will prudently manage their differences and not allow differences on any issue to become disputes.”

Referring to the boundary dispute with China, New Delhi said, “The two leaders have exchanged views on outstanding issues, including on the boundary question. They have welcomed the work of the Special Representatives and reiterated their understanding that efforts will continue to be made to ensure peace and tranquillity in the border areas, and that both sides will continue to work on additional Confidence Building Measures in pursuit of this objective.”

On terrorism, it said, “Both leaders are concerned that terrorism continues to pose a common threat. As countries that are large and diverse, they recognised the importance of continuing to make joint efforts to ensure that the international community strengthens the framework against training, financing and supporting terrorist groups throughout the world and on a non-discriminatory basis.”

On a question as to whether there was any reference to Pakistan-sponsored terrorism, Mr Gokhale said, “The purpose of the informal summit is to have an overarching discussion. I think the leadership therefore focused on what sort of threats were there to complex societies such as ours, on how we should work together to combat it (terrorism and radicalism).”

Referring to strategic communication between the two countries, New Delhi said, “The two sides will continue to adopt a positive, pragmatic and open attitude and to enhance appreciation of each other’s policies and actions in line with the general direction of their friendship and cooperation. In this regard, they also agreed to continue to enhance strategic communication on all matters of mutual interest, and to continue the momentum of high-level exchanges by making full use of dialogue mechanisms.”

On trade, the statement said, “In pursuit of their efforts to further deepen economic cooperation and to enhance their closer development partnership, the two leaders have decided to establish a high-level economic and trade dialogue mechanism with the objective of achieving enhanced trade and commercial relations, as well as to better balance the trade between the two countries. They have also agreed to encourage mutual investments in identified sectors through the development of a manufacturing partnership and tasked their officials to develop this idea at the first meeting of the high-level economic and trade dialogue.”

To boost people-to-people linkages especially in the context of the summit venue, it said, “The two leaders exchanged views on the age-old commercial linkages and people-to-people contacts between India and China in the past two millennia, including significant maritime contacts. In this regard the two leaders agreed on establishment of sister-state relations between Tamil Nadu and Fujian Province, exploring the possibility of establishing an academy to study links between Mahabalipuram and Fujian province... and conducting research on maritime links between China and India in view of our extensive contacts over the centuries.”