India   All India  12 Dec 2018  Weddings these days are more about showing off your wealth
India, All India

Weddings these days are more about showing off your wealth

This is not counting what was spent on flying florists from Florence and hiring chefs from Switzerland. 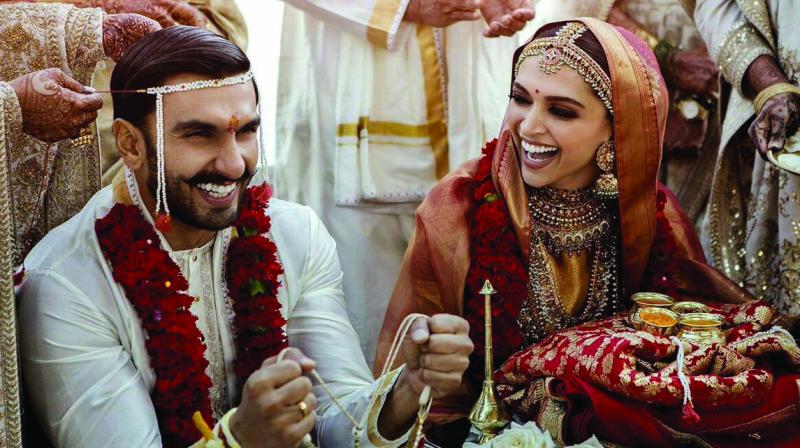 When the photographs of the much talked about Deep-Veer di shaadi hit the social media, I was faced with this odd little question by my niece: Did Ranveer (Singh) change his clothes more than Deepika (Padukone)? I wasn’t sure what to answer, but I was pretty certain that they must have had as many, if not more, costume changes than in their film Padmaavat! Deepika and Ranveer’s wedding really did seem like an extended Bollywood film. Dressed in matching outfits by Sabyasachi, set against the gorgeous 18th century Villa del Balbianello on Italy’s Lake Como, it was a breathtaking sight that looked nothing short of a fairytale.

I reasoned, a wedding is probably the one time when a couple get to splurge legitimately and no one will guilt them for breaking the bank balance. Didn’t Deep-Veer deserve the best, given Deepika’s depression and her rather public split with the Kapoor boy of Badtameez Dil fame? One would argue she deserves a big fat wedding, even if it raked up to Rs 1 crore 73 lakhs, just to rent the 75-room villa at a luxury resort in the village of Blevio for a week. This is not counting what was spent on flying florists from Florence and hiring chefs from Switzerland. The bills clearly run into crores of rupees. Yet why did it make me feel a tad uncomfortable to see all this money lavished on one occasion, even if the couple was most deserving? It was perhaps because I couldn’t get the image of the old farmer standing outside the bank to quickly retrieve his life savings during demonetisation and then dying of a heart attack, when he realised he didn’t have enough for his daughter’s wedding.

These days, weddings are more about showing off your wealth. Consequently, poor families are under tremendous pressure to spend more and this needs to be checked. Weddings used to be simpler at one time… even in Bollywood. For example, one didn’t even come to know when Dimple Kapadia and Rajesh Khanna got married. It was a simple ceremony with the actress wearing a traditional red sari, with her pallu on her forehead, her mehendi-clad hands and a stunning nath made her one of the most simple and beautiful brides ever! Or when Amitabh and Jaya Bachchan (then Bhaduri), had a simple wedding. Dressed in an elegant, minimal bridal avatar Jaya was one of the best-looking actresses of the 1970s! And no, they didn’t contact designers to handcraft their outfits. In fact, during those days most of the brides wore saris that were handed down from generations in the family. Those were different values and different times.

Weddings, not just in India but world over, have become more lavish and more of a public spectacle over the last decade, and it shows no signs of abating. When placed alongside the rising rates of divorces that take place both in India and globally, it makes one ask oneself: are we overcompensating? The wedding season in India has become more about showing off and impressing society, rather than a solemn affair where two people pledge to live the rest of their lives with each other. I had read about the couple that got married in a helicopter and those that got married under the sea, but that was adventure shared by two people. These weddings are all about extravagance and overindulgence.

Remember the 1980s, when getting married meant simply taking the seven chakkars around the fire? Or, where the hero just cuts his thumb and applies blood in heroine’s maang? Then came the Karan Johar wedding, the Sanjay Leela Bhansali wedding, all fit for a queen (pun intended)! Every wedding season, parents of the bride and groom-to-be, spend crores on the wedding.

In fact, it has been estimated that parents spend over a fifth of their savings on weddings — even those who cannot afford it. I recall to mind, the father who died of a heart attack because he could not pay for his daughter’s wedding during Narendra Modi’s demonetisation drive. The urge to impress runs through every stratum of society. Even my maid asked for a `50,000 advance for her brother’s wedding. She said that she would have to feed at least 100 people. Such pressure is easily avoided if our society returns to our basic values.

Research shows you might be better off with an affordable — but well-attended — wedding. Scott Stanley and Galena K. Rhoades, professors and researchers for the Institute of Family Studies in the United States, report that while the cost of weddings has been rising, the number of guests has been falling. Stanley and Rhoades, who study “relationship quality”, conducted a study on the size of weddings (i.e. how many guests attended) and marital happiness, and found that people who had bigger weddings were generally happier. This makes sense according to both social science and common sense: If you take vows in front of more people, you’re more likely to keep them; your marriage is supported and encouraged by your community — all auspicious things for the happy couple. For the average person that means if you spend less on designer outfits, exotic locations and expensive decorations, you can afford to feed more guests and hence invite more people. Couples in the US are looking at the possibility of cutting back on expensive weddings.

In India, however, it may take time before that trend catches on! I say this because we have come to associate weddings with social status rather than commitment and life-long partnership.

It doesn’t matter if the nuptials stand the test of time; what matters is how many crores were spent on it! In 2016 Congress MP Ranjeet Ranjan introduced a private member’s bill in the Lok Sabha — Marriages (Compulsory Registration and Prevention of Wasteful Expenditure) Bill — that sought to limit the number of guests invited to weddings and the menu served to them. The bill also proposed that anybody who is spending more than `5 lakhs on a wedding should declare this in advance to the government and contribute a tenth of that amount to a fund set up to help poorer families host weddings.

The implementation of the bill might bridge the gap between the haves and the have-nots and reduce the wanton spending that goes on during Indian weddings, when the country has a large population that clearly lives below the poverty line. However, it’s not been easy to put into action. In an ideal world, people should realise this on their own without a piece of legislation to enforce it.