The last time the royal barge procession was held, was in 2006 for the late Thai King Rama IX’s 60th birthday. 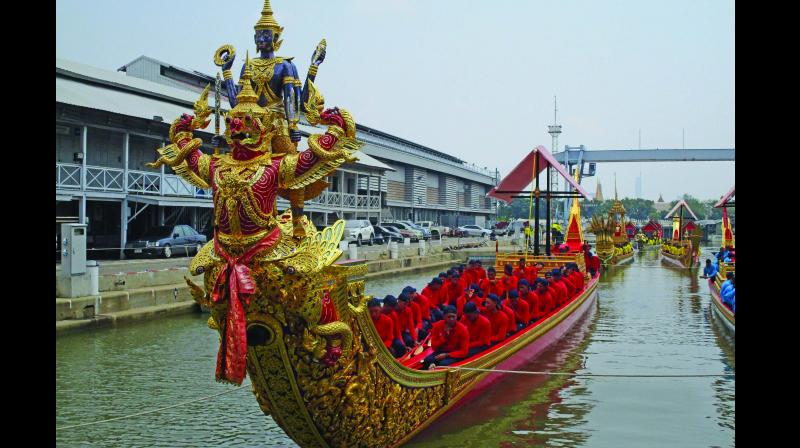 One of the most talked-about and looked-forward-to events in Bangkok this month, on December 12, is the “Royal Barge Ceremony”, which is the last programme in the year-long celebration of the new Thai King Rama 10’s Royal Coronation.

Fifty-two barges, which are several hundred years old, but have been gorgeously repainted and refurbished, will sail down the Chaophaya, filled with around 2,200 oarsmen, magnificiently attired in red, green, blue costumes, topped with ornamental caps and shoes.

The oarsmen have been hand-picked for the job, and are officers of the Navy with an average age of 21, who have been intensively practicing for nearly a year  for this highly auspicious event.

The barges themselves are nearly 200 years old, and had been handed down from as far back as Thai King Rama I. They are preserved carefully, and used only for very special religious or royal ceremonies, like the Kathin ceremony for Buddhist monks or important Royal events.

The last time the royal barge procession was held, was in 2006 for the late Thai King Rama IX’s 60th birthday.

When not in use they are preserved in the Royal Barge Museum.

This year is scheduled a very important Royal Barge Processions, as it is the year of the Royal Coronation.

On December 12, the majestic barges will sail down the Chaophaya River, on a route of 3.5 km, from the Wasukri Pier to the pier of the famed Wat Arun temple.

At the head of the boat- procession, will be the four gorgeous Royal Barges, the most important being the Suphannahong, painted in gold lacquer and glass-jewel decorations, with the head of a golden swan or “Phoenix”, where the Thai King and Queen would be seated. This boat is said to have been made from a single piece of teak wood.

Apart from the four royal barges, the other barges have many figures from the Ramayana or Ramakien, including Hanuman, Bali, Sugreeva. There are also Asura barges, with many animal images.

The royal boat procession would be a marvellous amalgam of colour, movement,sound. The gorgeous costumes, synchronised rowing, and religious chanting,are the main highlights of this unique and spectacular event.

The chanting is of two types-the normal chanting, and the royal chanting, where special verses are composed for the royalty.

The chanters are also especially trained for this musical form.

The chief chanter of the current royal barge procession, informed that he had been doing this job for several years, and rigorously practised for it several hours every day, as it needed strength and power, to chant songs on a moving boat. He stated that he closely watched wind conditions, and modified his chantings accordingly.

Having reached 60 years, he would retire this year, and was honored that he could partake in this year’s barge procession, as it was part of the royal coronation ceremony.

The chief oarsman of the barges also stated that he kept close track of weather and  river conditions, as the King’s safety was of utmost importance.

In fact, the royal barge procession was supposed to have been held earlier in October, but was postponed to December, due to bad weather conditions.

Huge crowds of nearly 100,000 were expected to watch the Royal Barge Procession from many piers in the city. Six locations had been earmarked for the public, including well-known spots like the Thammasat Varsity, Rama VIII bridge, Siriraj Hospital.

Specially erected shamianas on the piers,would house the Prime Minister, his Cabinet members, the diplomatic Corps, and other VIPs.

Many riverside hotels and restaurants were also cashing in on the event, and organsing special packages, to view the royal barge procession.

A special feature of this year's royal barge procession was the AR technology used, by which one could download the application, and view all  the images of the boats on one's phone, and also see the live coverage of the processions .This was in three languages — English, Thai and Chinese. A unique and  spectacular event, to end the year-long grandiloquent ceremonies of the Royal Coronation of  the new Thai King.