India is also a major source of employment for Amazon’s global operations with some 62,000 full-time staff and 155,000 contract employees. 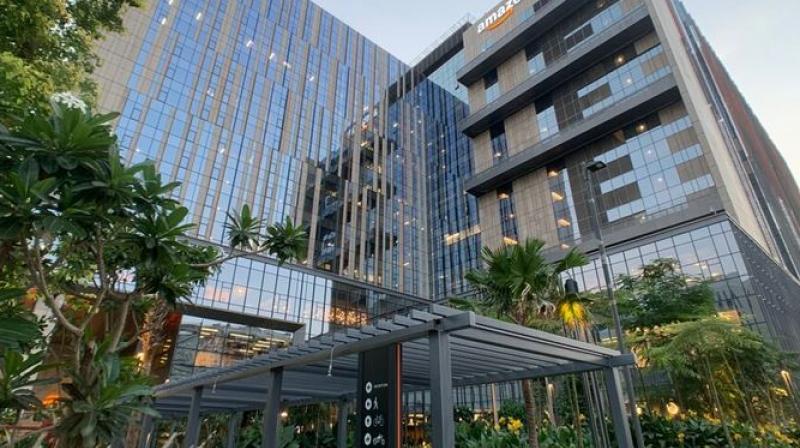 The US retail giant launched its first site in the South Asian nation of 1.3 billion people in 2013 and is locked in a fierce battle with Walmart, which bought a 77-percent share in local e-commerce behemoth Flipkart for USD 16 billion last year. (Photo: Amazon | Twitter)

Hyderabad: With 49 elevators moving a floor per second and zumba classes for its more than 15,000 employees, Amazon’s new Indian headquarters, its biggest building globally, matches its ambitions in a vast but challenging market.

The US retail giant launched its first site in the South Asian nation of 1.3 billion people in 2013 and is locked in a fierce battle with Walmart, which bought a 77-percent share in local e-commerce behemoth Flipkart for USD 16 billion last year.

“For Amazon, India is a very important geography,” the firm’s human resources director for India and the Middle East, Deepti Varma, told AFP at the gleaming new 86-metre (282-feet) tall office building in the southern tech hub of Hyderabad.

While the prospects of success in the vast nation are tantalising, the risks are also high, with Amazon and Flipkart incurring big losses as they expand and attempt to tap into new markets in Asia’s third-largest economy.

Both firms will also face fierce competition from Indian conglomerate Reliance Industries -- helmed by Asia’s richest man, Mukesh Ambani -- which is preparing to go up against the two US companies with its own e-commerce platform.

New e-commerce rules that came into force in February banned companies like Amazon from selling products from firms in which they have a stake. They are also forbidden from entering into exclusive deals with sellers.

The regulations were brought in after brick-and-mortar retailers complained the e-tailers were unfairly selling products at discount prices.

“Going forward, the challenges are more around regulation and how to navigate the policy and regulatory environment,” Ankur Bisen of Delhi-based consulting firm Technopak told AFP.

“We have seen how some of the policy announcements have got them off-guard.”

Amazon has already earmarked USD 5 billion in investment funds for India, where one in three people use the internet -- a figure forecast to swell by 300 million by 2020 mainly due to growing smartphone use.

India’s e-commerce sales are expected to triple between now and 2022, when they are likely to pass the USD 100 billion mark, according to recent research by industry body NASSCOM and PricewaterhouseCoopers.

Walmart, the world’s biggest retailer, said in May after reporting its first-quarter earnings that despite losses at Flipkart, “we continue to believe is a very sound long-term investment in a compelling market”.

India is also a major source of employment for Amazon’s global operations with some 62,000 full-time staff and 155,000 contract employees.

Bisen said the Hyderabad campus “is a signal to the government that ‘we are increasing our base in India and we are making sure there is a lot of India that is built into Amazon’s global story’“.