Understandably with its focus on organic carpets, Mandira Utsav is trying to give the women that extra edge in the competitive carpet industry. 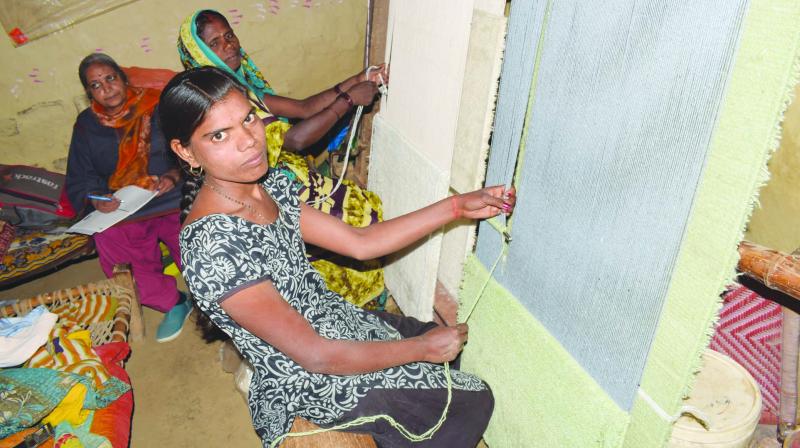 Slowly making inroads into organic carpet making are a small band of women weavers at the Mandira Utsav training-cum-employment centre at Nai Bazar, Ashok Nagar, Bhadohi.  With their skills upgraded to making superior hand-knotted and tufted carpets, there is a frenzy of activity as the women prepare for their products to be on display at the Pure London Fair on organic carpets in February.

Carpets in vogue in Europe are in soft natural colours, grey and charcoal, brown, light brown and beige.  A mélange, blending of two natural colours, is favoured. Mr Sushanto Mitra of Mojopanda Exim Pvt Ltd, the brain behind the move to centre-stage the participation of women in organic carpet making at Bhadohi, says the children’s section offers a great opportunity for organic woolen products. Wool regulates the humidity and natural wool is anti-bacterial and anti-allergic so even if a child falls he or she will not get hurt or pick up an infection.

The Mandira Utsav weavers, most of them marginalised women from traditional families of weavers, have been making 520 sq metres of carpet and durries valued at Rs 22 lakh every year.  Their buyer for the UK and Germany is Pro Lana of Germany. Currently, under preparation for the London Fair are 10 hand-knotted and tufted carpets for children. Keeping in mind the trend in Europe, the children’s carpets are in soft colours and at the London Fair a major incentive will be the display of the weavers’ photographs alongside the carpets they have made. Organic products, women-centred production and the use of ethical practices in the trade are expected to draw attention to the Mandira stall at the fair. After launching the women and getting recognition for their work, Mitra hopes to channel their energies commercially.

Some 20 years ago when there was an outcry and crackdown on child labour in carpet making, women became more visible in this sector. In the last 10 years, there has been a greater surge of women in the carpet industry of Bhadohi.

Though most of the women weavers have just minimum education, they come from traditional families of weavers and those trained at Mandira Utsav have been evaluated by the Indian Institute of Carpet Technology at Bhadohi and given certificates as well as artisan cards that would entitle them to bank loans from Rs 50,000 to Rs 2 lakh to buys looms or become entrepreneurs. Mr Deepender Jana, who did the evaluation, says with 50 to 60 per cent of the 3.5 to 4 lakh weavers being women, the future of Bhadohi carpet industry depends on them. Entire families are involved in weaving and even old women, who cannot step out, sit in their mud huts and make balls of wool from the hanks of yarn, adding to the family income. There are about 700 carpet exporters in Bhadohi alone and 60 per cent of the carpets exported from the country carry the Bhadohi tag, says Jana.

With skilled manpower in place, a 35’ by 40’ hand knotted carpet from Bhadohi can fetch Rs 35 lakh. Understandably with its focus on organic carpets, Mandira Utsav is trying to give the women that extra edge in the competitive carpet industry.

Even in the domestic market, carpets are in demand. The large number of hotels in and around Bhadohi and Varanasi need to change their carpets every three/four years and this means sustained work for those in carpet manufacturing. 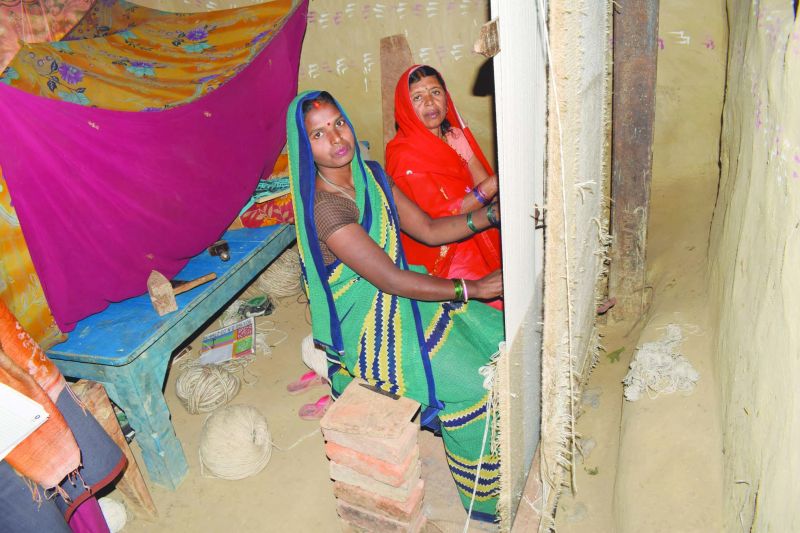 Gyan and Gehna Devi weave carpets at their homes.

So what is so special about organic carpets? The wool for the organic carpets is sheared off sheep raised organically. These sheep graze in natural habitats, are not fed chemicals, vitamins, drugs etc. Following the norms of the International Federation of Agriculture Movements on organic, no chemicals are used in the rearing of sheep for organic wool. Even treatment of fungus in their hooves is not allowed by dipping them in chemically medicated water. They can be treated only by borax powder to ensure the organic status of the sheep. To get rid of ticks and other bacteria, only neem oil sprays are permitted. A diary is maintained on each sheep whose wool is used for organic carpets. Auditors from the Netherlands come twice a year to check the diaries, take sample of sheep wool as well as the soil of fields they graze in. Simultaneously, they interview the farmers. Mitra’s organisation is working with 250 herders with about 1,30,000 sheep above the snowline in Himachal and Uttarakhand to ensure the organic quality of sheep.

The sheared wool is taken to Sundernagar in Himachal for washing as per Global Organic Textile Standards. Wool which was available for Rs 30 to Rs 40 per kg, costs Rs 75 to Rs 90 on being declared organic. From Sundernagar, the wool goes to Bikaner where it is converted into yarn and felt. The covers of children’s mattresses are made of felt.

While Mandira Utsav has a large, airy, well-lit room where every day some 20-plus women come to learn weaving and its finer aspects or to work from 9 am to 5 pm, other women who have trained at the centre work from their homes in adjoining villages. There is insufficient space and light in most village homes and power supply is erratic, but working at home enables women to look after their children, their cattle and run to the fields to water crops when it is available.

At Raipur village, Jaunpur District, a mother and daughter team of Pramila Devi (46) and Savitri (17) are working on a 2 ft by 3 ft white and green bedside carpet in a room in their hut. Though Pramila’s husband is a weaver who goes to work in a city company, the two women are the first in carpet making from the family and got their certification after learning at Mandira Utsav in 2017. Finishing their household chores they settle before the loom at 8 a.m.  In a month, the mother and daughter make four carpets that would fetch them about Rs 4,000. Though this is less than what they would earn working from the centre, working from home enables them to manage their household better, the cow and 10 goats they own and the farm land taken on lease. Savitri’s brother, Deepak, studying in class 12 takes the finished carpets to the vendors. He has learnt weaving from his mother and can even help out. The women have made 36 carpets so far and their speed and efficiency is increasing every month. Though Savtri works faster than her mother, she is also studying in an intermediate college and has less time for weaving. The steady income from carpet weaving enables them to dream of a better live. 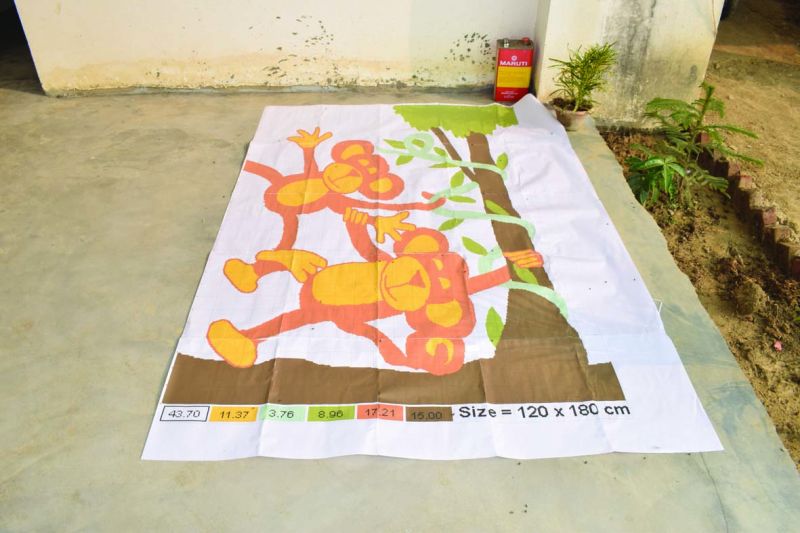 A carpet for a kid's room.

In another home in Raipur, Gyan Devi and Gehna Devi, in their thirties and related by marriage, are working on a 10 ft by 5 ft white and beige carpet with a darker beige design border. Gyan Devi who had learnt weaving at home went to Mandira Centre to upgrade her skill and learn designing. She is now back working from home. She is faster than Gehna Devi who learnt weaving at home from her brother-in-law a year ago. Her husband is a carpet weaver in Panipat.  Gyan Devi has five children and the income from carpet weaving is invaluable. Her husband does labour work. Five members of this large, joint family are into weaving. Sitting at home, Gyan Devi gets orders and executes them. Her son delivers the finished products to the companies. Both women earn about Rs 4,000 a month.

With educated children of weavers going for other professions, women are increasingly becoming the backbone of the carpet industry. There is a growing demand for setting up carpet weaving centres like Mandira Utsav, so that women can work closer to their homes and be assured of better income.  Sri Ram, a carpet weaver from Raipur, says weavers who are commissioned to work are shortchanged when they deliver the finished products. Buyers find fault with the carpets, say there are less knots per square inch than commissioned or the carpets are loosely made. The weavers end up losing Rs 200 to Rs 300 on the Rs 1,000 carpet. A weaving centre, run by a good vendor, he feels, would reduce chances of weavers being cheated. Money could go directly into weavers’ bank accounts.

For the women who have chosen to work at Mandira Utsav, the wages are better, go straight into their bank accounts and there is bonhomie. It has become a second home to many.