The High Court and Supreme Court Judges (Salaries and Conditions of Service) Amendment Bill, 2021 seeks to amend two laws for this purpose 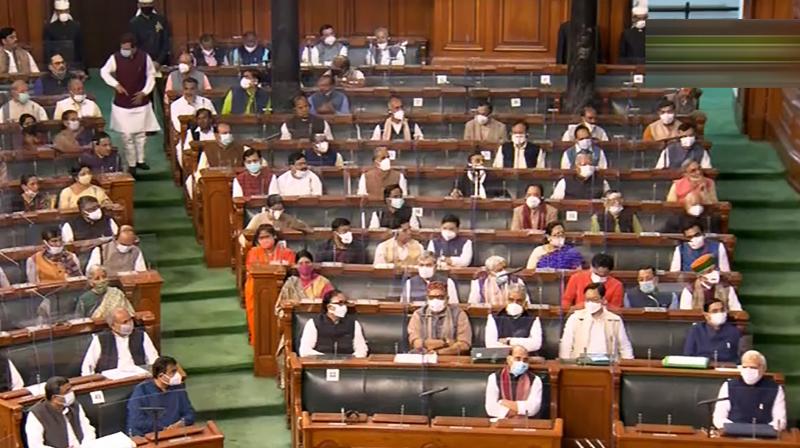 Prime Minister Narendra Modi and other parliamentarians in the Lok Sabha during the Winter Session, in New Delhi. (Photo: LSTV/PTI)

New Delhi: Lok Sabha on Wednesday passed a bill which seeks to bring clarity on the age of retired judges to determine when they will get enhanced pension.

The High Court and Supreme Court Judges (Salaries and Conditions of Service) Amendment Bill, 2021 seeks to amend two laws for this purpose.

Before the passage of the bill, Law Minister Kiren Rijiju told the House that the measure does not in any way affect the salary and pension of judges but only inserts a clarification. The bill seeks to rectify an anomaly to end any confusion, he said.

The bill was later passed by a voice vote.

According to the bill, in 2009, the two laws were amended to provide that every retired judge or after his or her death, the family, as the case may be, will be entitled to an additional quantum of pension or family pension.

Accordingly, the additional quantum of pension to retired judges of high courts and the Supreme Court is being sanctioned on completing age of 80 years, 85 years, 90 years, 95 years and 100 years, as the case may be.

However, in a writ petition filed by a retired high court judge, the Gauhati High Court had held that the benefit of the additional quantum of pension as per the High Court Judges Act would be available to a retired judge from the first day of his 80th year.

Subsequently, the High Court of Madhya Pradesh also directed respondent Union of India to construe the word 'from' as it appears on the slab as the first day of entering the minimum age of the slab -- 80,85,90,95 and 100 years -- along with other consequential benefits to the petitioners, the Statement of Objects and Reasons of the bill reads.