It said that the Heli-dropped task force operated in snow-clad regions at heights over 9,000 feet 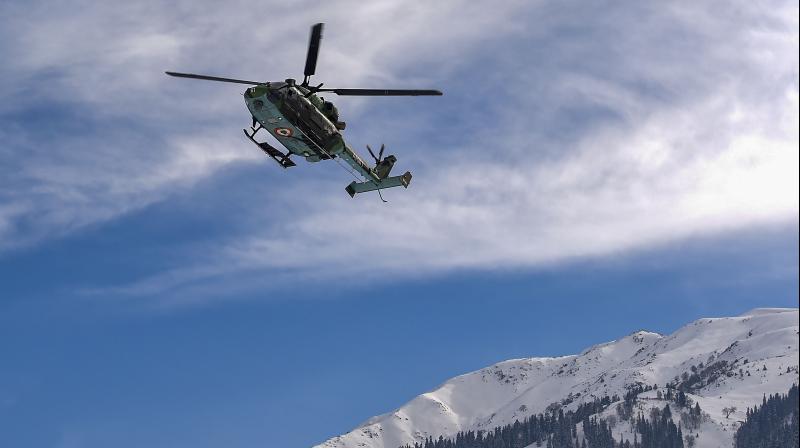 A helicopter flies during a joint exercise by the Indian Air Force, Navy and Army at snow clad higher reaches of Gulmarg on the heights of 9000 feet, in Baramulla district of North Kashmir, Tuesday, Dec. 7, 2021. (PTI)

Srinagar: The Army together with Indian Air Force (IAF) and the Navy conducted a heliborne exercise in the higher reaches of Kashmir Valley on Tuesday as part of a joint defence preparedness in the border region.

The defence sources here said that the exercise in which the heliborne columns of the three armed forces participated using latest helicopters and other equipment was aimed at fine tuning operational and logistics aspects of Heliborne operations.

Srinagar-based defence spokesperson Colonel Emron Musavi said that the exercise was conducted under the auspices of the Army’s 15 Corps which is also known as Chinar Corps. “A helicopter borne training and validation exercise was conducted in the higher reaches of Kashmir Valley. This was a tri-service exercise undertaken in Kashmir with the IAF, the Navy and the Army,” he said.

He added that the exercise was “planned to validate the joint capability to insert the task force tactically behind enemy lines in an intense air defence and electronic warfare operating environment”.

A statement issued by the Army here said, “The successful conduct of the mission validated the true spirit of jointness achieved in planning, utilisation of resources and accomplishment of laid down mission objectives as a true reflection of the tri-service ethos of the Indian Armed forces”.

It said that the Heli-dropped task force operated in snow-clad regions at heights over 9,000 feet. The Heli Borne task force included troops from Infantry, The Special Forces and the MARCOS from the Indian Navy. The Heli-drop exercise included full transportation and armed helicopters from Indian Army and Indian Air Force including the Apaches (Boeing AH-64 Apache is a twin-turboshaft attack helicopter with a tailwheel-type landing gear arrangement and a tandem cockpit for a crew of two).

“Aspects related to electronic warfare were also validated,” it said and added, “The exercise showcased the capability of the Chinar Corps and the Indian Army to carry out successful operations in high altitude areas incorporating all facets of contemporary and modern battlefield in synergy with IAF and Indian Navy”. End it