The sources also said that a fairly large number of militants have sneaked in the Valley from across the LoC and IB with Pakistan over recently. 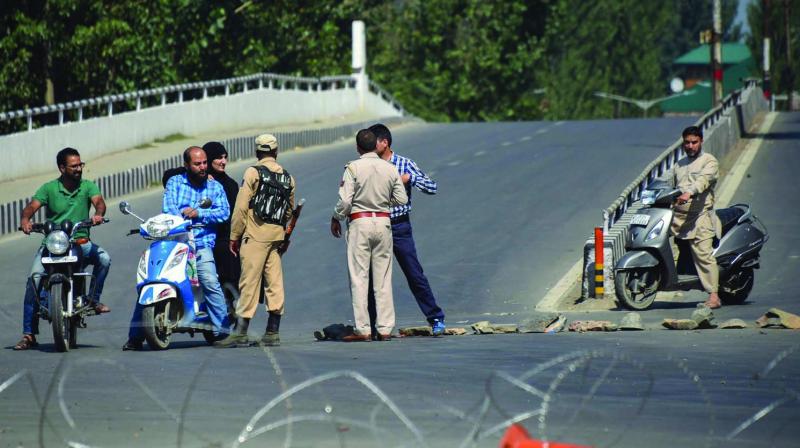 Srinagar: The security forces combating a three-decade-old insurgency in Jammu and Kashmir are reported to be anxious following reports that a large number of militants have sneaked into the restive State from across the border over the past few weeks and that they may try to carry out some ‘spectacular’ terror actions in near future.

These reports also purport that local Kashmiri militants are roaming freely in some parts of the Valley and are occasionally accompanied by non-local militiamen while on foot.

The police sources while confirming that there have been instances wherein gunmen, mainly locals, were seen roaming in some villages of the Valley said that militants belonging mainly to Hizb-ul-Mujahideen, Lashkar-e-Tayyaba and Jaish-e-Muhammad have regrouped after taking advantage of suspension of counterinsurgency operations- previously called ‘cordon-and-search’ and lately ‘kinetic’ operations.

The sources also said that a fairly large number of militants have sneaked in the Valley from across the Line of Control (LoC) and International Border (IB) with Pakistan over recently.

J&K’s Director General of Police, Dilbag Singh, while corroborating it said on Sunday that a large number of militants managed to sneak into the State from across the border. He told reporters during a visit to frontier district of Poonch, “After their crossing onto this side, we had some encounters and some militants were also eliminated…some of these militants have been sighted at certain places and we have intensified our operations against them”.

The police sources said that one such encounter started in Trumkhal area of Kashmir’s central Ganderbal district on September 8. The officials said that, so far, two militants have been shot dead by the security forces. There are rumours about the security forces’ have suffered quite a few casualties but both the Army and the J&K police officials deny it.

Also, the DGP said that the operation lasted for four days only whereas unofficial reports suggest that it is still underway.

Mr. Singh accused the Pakistan Army of trying to push in as many militants. He said that the counter-infiltration grip scuttled some of these attempts by killing infiltrating militants. He said, “Pakistan has intensified ceasefire violations to push in as many militants as possible. A large number of such violations are taking place in both Kashmir and Jammu regions. It is going on in Kanachak, R S Pura and Hira Nagar (along the IB) and quite frequently along the LoC in Poonch, Rajouri, Uri, Nambla, Karnah and Keran sectors.”

He added, “These ceasefire violations are aimed at pushing (in) as many militants as possible (before the onset of winter). Our anti-infiltration grid is very strong and many infiltration attempts have been successfully foiled in the recent times.”