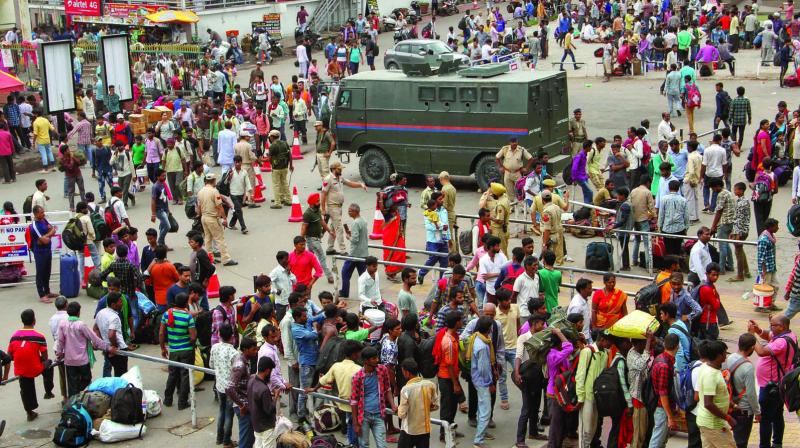 A heavy rush of stranded passengers at Jammu Tawi railway station during restrictions in Jammu on Wednesday. (Photo: PTI)

New Delhi/Islamabad: In a major escalation of diplomatic hostilities with India after New Delhi’s bold move on Kashmir, Pakistan announced on Wednesday that it would “downgrade diplomatic relations with India”, with Islamabad asking New Delhi to “withdraw” Indian high commissioner Ajay Bisaria. Sources said: “Mr Bisaria has been expelled by Pakistan.” The Pakistan government officially said: “Pursuant to the decision of the National Security Committee today, the Government of India has been told to withdraw its High Commissioner to Pakistan. The Indian Government has also been informed that Pakistan will not be sending its High Commissioner-designate to India.”

In another highly provo-cative move, Islamabad has decided to observe India’s Independence Day (August 15) as a “black day”. There are indications that New Delhi will squarely face the move and not give in to any blackmailing by Islamabad. In another equally provocative diatribe, the Pakistan PM “directed that all diplomatic channels be activated to expose the brutal Indian racist regime, design and human rights violations”.

Article 370 of the Constitution that effectively ended the special status of J&K.

While diplomats, and ambasadors, have been recalled before in the turbulent history of India-Pakistan diplomatic ties that saw at least two full-scale wars being fought by the two neighbours in 1965 and 1971, the latest Pakistani move presents yet another serious challenge to diplomacy.

There are also indications that the trade through the Wagah-Attari border will be hit too and the export of commodities and products like onion, cement, graphite etc is likely to be immediately stopped.

“Our ambassadors will no longer be in New Delhi and their counterparts here will also be sent back,” foreign minister Shah Mehmood Qureshi was quoted by news agencies as saying in televised remarks in Islamabad soon after the NSC meeting. While Mr Bisaria is in Islamabad, Pakistan’s high commissioner-designate Moin-ul-Haq is yet to take charge in New Delhi and will therefore not join now.

In other decisions, Pakistan also decided to “review bilateral arrangements, take the (Kashmir) matter to the United Nations, including the Security Council”. This was decided by Islamabad after Pakistan PM Imran Khan on Wednesday “chaired a meeting of the National Security Committee at the Prime Minister’s Office”. Pakistan also decided that its Independence Day on August 14 will “be observed in solidarity with brave Kashmiris” and “their just struggle for their right of self-determination”. Pakistan’s military leadership also attended the meeting. The meeting was attended by Pakistan’s foreign, defence and interior ministers, as well as the all-powerful Army chief, the ISI chief and the foreign secretary.

A joint session of Pakistan’s Parliament, in a resolution, accused India “of trying to change the demographic structure” of J&K. During a discussion in Pakistan’s Parliament, its science and technology minister Fawad Chaudhry had urged his government to cut off diplomatic ties with India. “Although Indian high commissioner Ajay Bisaria is a good person, he represents a fascist regime,” the minister claimed in a provocative manner.

Asking Pakistan PM Imran Khan to take the matter to the International Court of Justice, Mr Chaudhry egged his government on to take the route of war if needed. “Pakistan should not let Kashmir become another Palestine. Pakistan should not be afraid of war because honour is important than anything We have to choose between dishonour and war. Wars are fought for honour, and not to win or lose. So we should not be afraid of wars,” he said.

Meanwhile, the Bureau of Civil Aviation Security in India (BCAS), the apex body of aviation security in the country, has already issued an alert to all airports asking them to maintain a high level of vigil. “It (is) continuation of the alert issued by BCAS on 05.08.2019, recent developments pertaining to J&K and additional inputs received, civil aviation has emerged as a soft target from terrorist attack. The probability of unlawful interference is more from the city side of the airport premises. The metro airports are more vulnerable. The International Civil Aviation Organisation has also declared measures for land side security as mandatory practice,” the BCAS said in a note while listing out various security steps to be taken by all the agencies and airports.