Amazing Thailand is full of surprises, and one has only to wait and watch. 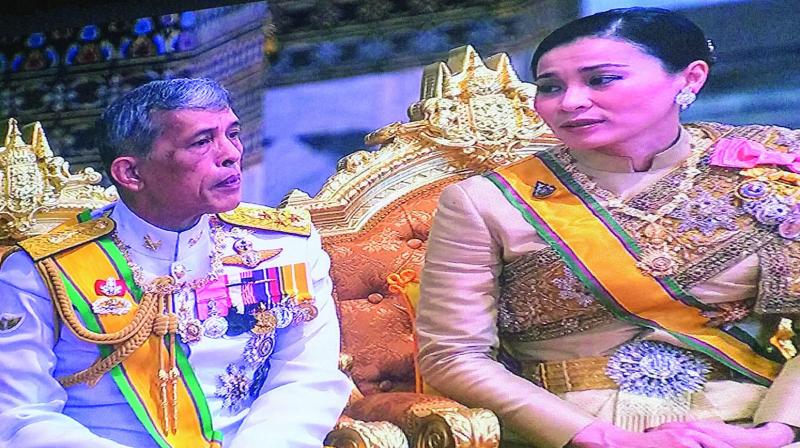 This writer felt privileged to witness this unique and magnificent page of Thai history.

When the late, revered King of Thailand Rama IX died in 2016, after a long 60-year reign, and the royal coronation of the next King Rama X was fixed for May 2019, more than two years later, one wondered why there was such a long delay for the important event.

It was only after witnessing the grandiloquent royal coronation of King Rama X over the last three days (May 4-6) that one understood why! I’m yet to see a more elaborate and spectacular range of rites and rituals, combined with astounding ceremonial costumes, rarified musical instruments, deep religious chanting, all carried out with a magnificent sense of purpose, that left one lost for words.

And then, there was the glorious sight of multitudes of people from all walks of like and all parts of the country, pouring into the capital, for the three-day event, lining the roads to watch the ceremonies on giant screen, in the burning heat outside They all wore yellow, to respect the auspicious colour of the new king’s date of birth. And it was a sea of yellow, in the old Rattanakosin island-district of Bangkok, the last three days.

When one remembers that there was a time when the Thai royalty were never allowed to meet the public, one can understand this enthusiasm and exhilaration. In fact, they would probably never get to see the Thai King, after this event.

Since the public was given free rail tickets, they could travel from around the country to attend the event, and these also included the hill tribes from the north. For three days, the public transport in the city was also free, which made it easier for the crowds to come to the coronation venue.

But there were numerous checking points, heavy security, huge queues, searing heat. Nothing would deter the visitors, as they sat from morning to evening, watching the ceremonial events on giant screens. In true Thai spirit, they were quiet, orderly, even though there were so many small kids and elderly people among them. The organisers distributed free water and food to them, as also hand-fans and caps.

This writer walked among the crowds for a short time on one of the days, but found the heat too much to handle, and watched the ceremonies on a giant screen, within the air-conditioned comforts of a large and lavish Press Centre that had been set up for the media, many of whose members had flown in from abroad.

Day One consisted of the chief ceremonies of the royal coronation, which were elaborate, splendid and historical. It was fascinating to see the bulk of the rituals being handled by brahmin priests, and one was told that most of the ceremonies originated from the royalty of India. There was the ablution ceremony by water, orchestrated by the chief priest, where the water from the five sacred rivers of Thailand (like the five sacred rivers of India) were poured on the King, His gold-trimmed white sarong outfit resembled the ceremonial dhotis worn in India. Other familiar Indian customs were the blowing of the conch shell, ringing of the small drums, applying the sacred white paste on the forehead, and placing the bael leaf behind the ear.

To this writer, the most important sight of the whole event, was that of an image of Buddha and of Ganesha, placed side by side by the chief Hindu and Buddhist priests of the royal palace.

After the ablution ceremony, came the anointment ceremony with holy waters from the 76 provinces of the country. The King sat on an octagonal seat, with a seven-tiered umbrella above him, facing East — sacred numbers and direction, in India too.

This ceremony was changed many years back, to fit democratic traditions, and instead of Brahmin priests anointing the King with the sacred waters, this was done by eight important individuals from public life, including the Prime Minister, leader of the legislative assembly, head of the Supreme Court and president of the privy council.

The King was dressed in full regalia — a rich brocade gown, a seven-kilo crown, sword, staff and turned-up slippers. He was seated on a high throne, signifying that he was above humanity and could be proclaimed divinity.

An interesting feature of the royal coronation was the crowning of the queen of the country. This year, the new queen was observed with much interest, as her name had been announced by the King only a few days before the coronation, and he had gone through a quick registered wedding. The slim and charming Queen Suthida was formerly part of the King’s bodyguard unit.

Day Two of the royal coronation was unique and personal, as it dealt with the handing over of gifts and titles to the royal family. For many people, this was the first introduction to the Thai royal family. It was made up of the King’s two sisters, two nieces, his first wife, and the three children of his previous three wives. His elder sister was not included, as she had married a foreigner and lost her royal status.

The Thai Prime Minister and the president of the privy council were also included in the royal family circle, signifying their close relationship with the King.

The evening’s event was made up of a spectacular royal procession through the streets of the old city. This historical custom was started many years back, when a forward-thinking Thai King decided that the royalty must have an interaction with the public.

The enthusiastic crowds lined up from early morning for the evening procession that went on till night over a 7km route. It was a spectacular procession of 1,500 individuals, which included soldiers in multi-colored plumes and uniforms, musicians in ceremonial costumes carrying ancient instruments, a jazz band playing the previous King’s jazz compositions, and finally two Hindu priests leading the way! One was struck by the stamina and smooth movements of this diverse range of marchers!

An interesting feature of the royal procession was that the King’s new wife marched along, too; after all, she was the member of his elite Royal Guard earlier. The King’s eldest daughter also marched with the royal procession, together with the Thai Prime Minister and several members of his Cabinet.

The royal procession was a stunning amalgam of visual and aural splendor, and as the multi-hued soldiers marched through the beautifully lit streets at night, the city looked like a stunning kaleidoscopic painting! (I was reminded of the Beating of the Retreat ceremony in Delhi!)

Truly a memorable and historical sight, and most of the public who saw the spectacle, including many foreigners, felt it was a once-in-a-lifetime experience.

In fact some of the elders in the crowd compared this darshan with the one of the previous King more than six decades back.

The royal coronation this year, came after six decades, which was why it was such a historical event for the country!

Day 3 was another important event for the Thai public, when the Thai King gave them a public darshan, from a historical balcony in the famed Grand Palace grounds (where the whole royal coronation was held).

There was no inch of free space, as every road was crammed with people who came at dawn, to bag a spot for the evening darshan. It was an exhilarating and unbelievable sign of devotion to the royalty, the like of which is rarely seen in the rest of the world. The Thai Prime Minister was in the crowd, too, and gave a welcoming speech to the King. In his address from the balcony, the King thanked the public and the PM for their support. He hoped that this support and cooperation would lead to unity among all parties in the country.

Now that the three-day royal coronation spectacle has ended, the concept of unity will be put to the test. The Prime Minister and his Cabinet members partook fully in the royal coronation, and showed their total commitment to the King. Their commitment to the people of the country will now be on show, as the latter wait to know the results of the Thai general elections, which were held in the country late March, after five years of military rule, but the results of which have still not been divulged!

Amazing Thailand is full of surprises, and one has only to wait and watch.