From President Ram Nath Kovind, PM Modi to other political leaders across nation took to Twitter to support ISRO's Chandrayaan 2. 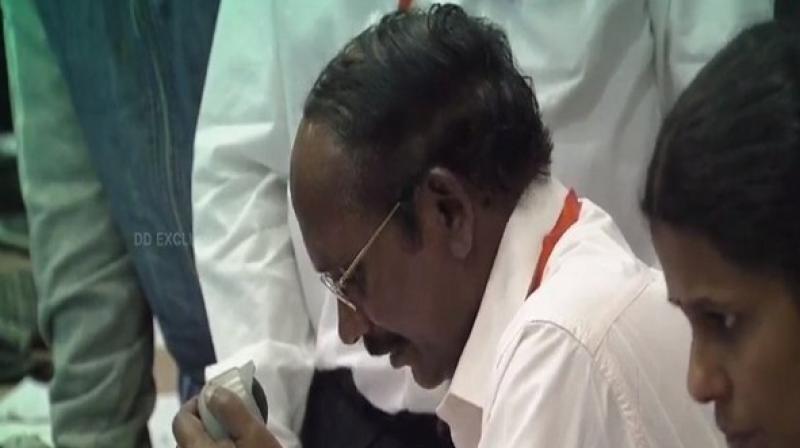 Indian Space Research Organisation's (ISRO) announcement that the communication with Vikram lander was lost evoked reactions from all bigwigs to common citizens across India, who stood in solidarity. (Photo: ANI)

Mumbai: Indian Space Research Organisation's (ISRO) announcement that the communication with Vikram lander was lost evoked reactions from all bigwigs to common citizens across India, who stood in solidarity.

The first words of support following ISRO chairman K Sivan’s disappointing announcement came from Prime Minister Narendra Modi who was at the ISRO control centre in Bengaluru. "Communication has been lost. I could see the anxiety on your faces. There is no need to get disappointed because it is not a small achievement. The country is proud of you," Modi said.

The PM later tweeted that the country remains hopeful and is proud of the scientists at ISRO.

India is proud of our scientists! They’ve given their best and have always made India proud. These are moments to be courageous, and courageous we will be!

Chairman @isro gave updates on Chandrayaan-2. We remain hopeful and will continue working hard on our space programme.

President Ram Nath Kovind said the scientists had shown exemplary courage and that country is proud of them.

With #Chandrayaan2 Mission, the entire team of ISRO has shown exemplary commitment and courage. The country is proud of @ISRO. We all hope for the best #PresidentKovind

Appealing to the people to not lose hope, Vice-President Venkaiah Naidu maintained that the Orbiter is still performing its mission.

There is nothing to despair. ISRO only lost communication with the Lander & not the hopes of 1.3 billion Indians. The Orbiter with its payloads is performing its mission. @isro #Chandrayaan2

Union Home Minister Amit Shah also took to Twitter stating that the nation stands with the scientists at ISRO.

ISRO’s achievement with getting Chandrayaan-2 so far has made every Indian proud.

India stands with our committed and hard working scientists at @isro.

My best wishes for future endeavours.

Chief Minister of Karnataka B S Yediyurappa boosted the morale of the team at Isro and said, “We are with you Isro. Proud of you to have dared to land at the south pole of the moon where no one else has ever attempted. Your capabilities and achievements have always made our country stand tall. This is just a success postponed.”

We are with you @isro. Proud of you to have dared to land at south pole of the moon where no one else has ever attempted. Your capabilities and achievements have always made our country stand tall. This is just a success postponed. #Chandrayaan2

Congratulations to the team at #ISRO for their incredible work on the Chandrayaan 2 Moon Mission. Your passion & dedication is an inspiration to every Indian. Your work is not in vain. It has laid the foundation for many more path breaking & ambitious Indian space missions. 🇮🇳

Andhra Pradesh Chief Minister Jagan Mohan Reddy took to Twitter and lauded ISRO's hard work and great efforts. "We were almost there! India is proud of our scientists. A minor setback in the last stanza is a stepping stone for success. The nation stands with ISRO team at this hour and appreciates the exemplary efforts," Reddy tweeted with an emoji of clapping hands.

We were almost there! India is proud of our scientists. A minor setback in the last stanza is a stepping stone for success. The nation stands with ISRO team at this hour and appreciates the exemplary efforts. 👏

Pema Khandu, Chief Minister of Arunachal Pradesh, stood in support of ISRO and shared pictures of Chandrayaan 2 on his twitter page.

The nation stands by the entire team of @isro as we wait in these tense times. Your hard work and commitment has made our nation proud. Jai Hind.#Chandrayaan2Landing

We are with you @isro. You have brought the nation, it’s young minds and all, together in sensing your achievements in Space. You will succeed.

Journey of #Chandrayaan2 so far and what lies ahead is no less than an achievement. We are proud of our scientists and confident that India’s space programme only gets stronger & better from here. Team @isro - a proud, grateful & an inspired nation stands with you!

We as a Nation are proud of @isro for their hard work on #Chandrayaan2. Obstacles are learnings that lead us to greater accomplishments in the future.#ProudOfISRO

Lost Communication but not hope. We are proud of you ISRO..🙏 #Chandrayaan2

The space agency in a tweet said, "This is Mission Control Centre. #VikramLander descent was as planned and normal performance was observed up to an altitude of 2.1 km. Subsequently, communication from Lander to the ground stations was lost. Data is being analyzed. #ISRO."

"Deeply saddened. The mission was 93% successful except the last 2.1 km. Don't forget NASA have failed 10 times before making its first impact in moon. We have just lost the lander but the orbitor will be making science for a year. #Chandrayaan2Live #Chandrayaan2Landing," a twitter user wrote.

"It's literally rocket science. Irrespective of the outcome, proud of @isro for inspiring a billion people with their efforts," another user wrote.

"It's a great attempt by ISRO, kudos for all the hard work which ISRO scientists have put in for this mission. Still many more achievements to come. We should be proud of this mission. Jai hind," a user named Gopal Rajnified tweeted.

Some said they were hoping for a Bollywood style scene.

"After long silence from control room, "I was hoping for Bollywood style scene in which one intern runs to K Sivan shouting "Sir , receiving data .. We are receiving data from Vikram"," said one user.

Other said there is nothing like failure or misses in science and technology.

One twitter user wrote, "Amazing how all of the world came together to watch #Chandrayaan2Landing and gave a sigh of heartbreak when it failed. Funny how humans compete with each other here but are brought together by something that's far, far out there."