India   All India  07 Jul 2022  Jaishankar presses for early resolution of outstanding LAC issues in talks with Wang
India, All India 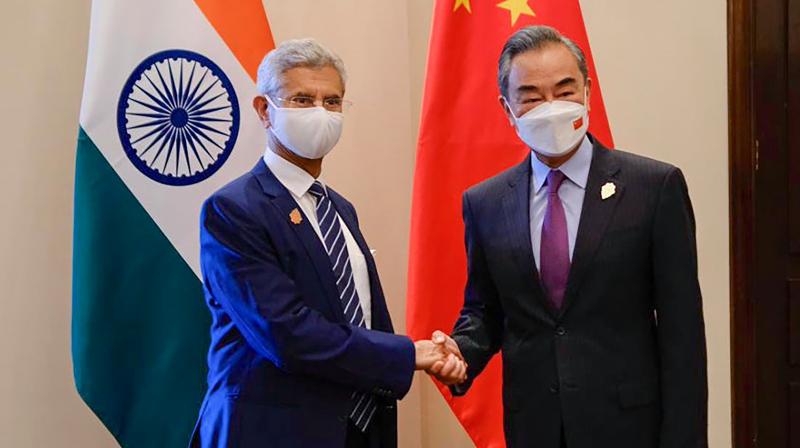 New Delhi: External Affairs Minister S Jaishankar on Thursday conveyed to his Chinese counterpart Wang Yi the need for an early resolution of all outstanding issues along the Line of Actual Control in eastern Ladakh, and asserted that bilateral ties should be based on mutual respect, mutual sensitivity and mutual interest.

At a one-hour meeting in Bali on the sidelines of a conclave of foreign ministers of the G20 nations, Jaishankar and Wang looked forward to the next round of military talks between the two sides at an early date to resolve the border issue.

Jaishankar also discussed with Wang the vexed issue of the return of Indian students to China and the resumption of direct flights between the two countries.

On the discussions on the border row, the Ministry of External Affairs (MEA) said Jaishankar reaffirmed the importance of "fully abiding" by bilateral agreements and protocols, and the understandings reached between him and Wang in their previous conversations.

"The External Affairs Minister (EAM) called for an early resolution of all the outstanding issues along the LAC in Eastern Ladakh," the MEA said in a statement.

Recalling the disengagement achieved in some friction areas, Jaishankar reiterated the need to sustain the momentum to complete disengagement from all the remaining areas to restore peace and tranquillity in border areas.

"He reaffirmed the importance of fully abiding by bilateral agreements and protocols, and the understandings reached between the two ministers during their previous conversations," the MEA said.

"In this regard, both ministers affirmed that the military and diplomatic officials of the two sides should continue maintaining regular contact and looked forward to the next round of senior commanders' meeting at an early date," it said.

The MEA said Jaishankar also recalled his meeting with Wang in Delhi in March and reviewed the progress of some key issues discussed then, including the return of students.

"The EAM stressed the need for expediting the process and facilitating the return of students on an early date," the MEA said.

"Began my day in Bali by meeting FM Wang Yi of China. Discussion lasted one hour. Focused on specific outstanding issues in our bilateral relationship pertaining to the border situation. Also spoke about other matters including students and flights," Jaishankar tweeted.

Thousands of Indian students were unable to return to China for over two years due to Beijing's COVID-19 restrictions. India has been taking up the issue with China several times.

There have been discussions between the two sides on the resumption of direct flights but there has been no forward movement on the issue. The flight services were suspended due to the pandemic.

The Shanghai Cooperation Organisation (SCO) is an influential economic and security bloc that has emerged as one of the largest transregional international organisations.

It was the first meeting between the two foreign ministers since Wang visited India on March 24 and 25.

In May, India and China held diplomatic talks on the border row and agreed to hold the next round of the Senior Commanders' meeting at an early date to achieve complete disengagement from all friction points in eastern Ladakh.

However, both sides are yet to decide on the military talks.

The border standoff between the Indian and Chinese militaries erupted on May 5, 2020, following a violent clash in the Pangong lake area.

The face-off escalated after the Galwan Valley clashes on June 15, 2020.Both sides gradually enhanced their deployment by rushing in tens of thousands of soldiers as well as heavy weaponry.

As a result of a series of military and diplomatic talks, the two sides completed the disengagement process last year in the north and south banks of the Pangong lake and in the Gogra area.