India   All India  07 May 2020  Styrene gas leak in Vizag brings back memories of a Bhopal morning
India, All India 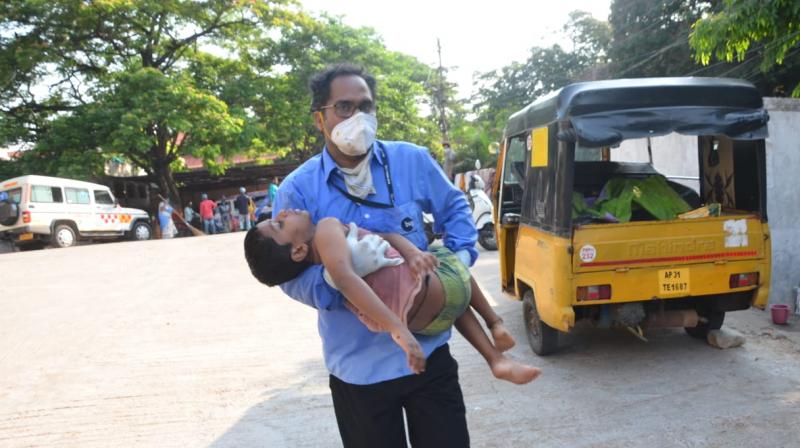 The gas leak took place from two 5,000-tonne tanks that had been left unattended due to the coronavirus lockdown since late March.(Photo: Narayana Rao)

For a few hours Thursday morning, the scene at Gopalapatnam village on the outskirts of Visakhapatnam, in the vicinity of the chemical company LG Polymers was one of utter horror. First there was a noxious smell in the air and then people began to fall like leaves right where they stood.

Motorists stopped to catch their breath and fell crumpled to the earth. Soon there were scenes of unexplained terror all around. Ambulances screaming in, people carrying children in their arms, and women slumped over in wheelchairs.

The scenes were reminiscent of the Bhopal gas tragedy in 1984. That nightmare too unfurled in the predawn hours with an odourless gas enveloping the city as it slept.

Police officer Swaroopa Rani said her staff were alerted to the district in Gopalapatnam at 3.30 am. The frantic calls said there seemed to be something noxious in the air. The policemen did find the air noxious, and immediately alerted the higher up in the city.

After the initial flurry of panic, the gas was identified as styrene, also called vinylbenzene, which is used in the manufacture of polystyrene plastics, fibreglass, rubber, and latex.

According to health officials mere exposure to the gas may not be fatal. However, acute exposure to a concentrated form of the gas can be toxic with severe consequences particularly severe for children.

Short-term exposure can lead to symptoms such as irritation of the eyes, gastrointestinal problems. It can also also affect the epithelial lining of various tissues. The gas is capable of harming the central nervous system.

Long-term exposure to styrene could lead to dysfunction of the central nervous system, fatigue, hearing loss, headache, and weakness. In extreme cases, acute exposure could also cause numbness of the feet.

Several epidemiological studies suggest there may be an association between styrene exposure and increased risk of leukemia and lymphoma.