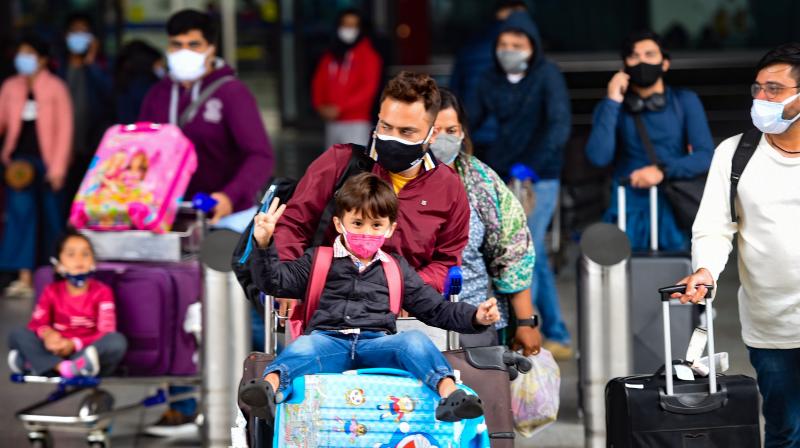 New Delhi: The Centre on Friday made it mandatory for people flying in from abroad to home quarantine for a week after landing in India and go for RT-PCR test on the eighth day. The revised guidelines, issued by the health ministry,  will  come into force from January 11 and will remain effective till further orders. The guidelines  will  also apply to passengers who test negative for Covid-19 at the airport.

The national capital also logged 17,335 Covid-19 cases and nine deaths in the last 24 hours. The positivity rate in the city has gone up to 17.73 per cent – an increase of 2.39 per cent than  the previous day’s figures. This is the highest single-day rise in Covid-19 infections  since May 8 when 17,364 cases were logged with a positivity rate of 23.34 per cent. As many as 332 fatalities were also recorded on that day.

At a meeting convened to review the Covid-19 situation in the national capital and adjoining districts,  the home secretary favoured ramping up of Covid-19 testing in all districts of Delhi-NCR where testing rate was very low. He directed the authorities in the region to come together to tackle the virus by adopting a unified strategy.

In Mumbai,  20,971 new Covid-19 cases -- the highest one-day spike to date --  and six deaths were reported in 24 hours.  About 84 per cent of those who tested positive were asymptomatic. The slum-dominated Dharavi area of Mumbai recorded 150 new Covid-19 cases -- the highest since the pandemic began. This is the second day in a row that the densely populated locality reported 100-plus infections. During the second wave, Dharavi had reported 99 cases on April 8, 2021. The locality currently has 588 active cases, of which only 147 patients have been hospitalized.

On the vaccination front, India achieved a major milestone by administering over 150 crore doses  to its adult population and teenagers in the 15 to 18 year age group.  . More than  91 per cent of the country’s adult population has received at least one dose while over 66 per cent have been fully vaccinated. Over 22 per cent of eligible adolescents  have also been vaccinated with the first dose since the vaccination for this group began on January 3.

The ministry’s guidelines have specified  that contacts of the suspect cases are the co-passengers seated in the same row, three rows in front and three rows behind along with the identified cabin crew. Also, all the community contacts of the travellers who have tested positive (during home quarantine period) would be subjected to quarantine for 14 days and tested as per the Indian Council of Medical Research protocol.

Prior to undertaking the journey, all travelers will have to upload a negative RT-PCR report of the test conducted within 72 hours of the beginning of the journey. Each passenger will  also  have to submit a declaration with respect to the authenticity of the report and will be liable for criminal prosecution, if found otherwise. International travelers arriving through seaports/land ports will also have to undergo  same protocols, except the  online registration facility which, as of now,  is not available for them.

Children under 5 will continue to remain  exempted from both pre- and post-arrival testing. But if  they are  found symptomatic for Covid-19 on arrival or during the home quarantine period, they too will have to undergo testing and will be treated in accordance with the laid down protocols

About two per cent of the total flight passengers from "not at risk" countries, will be randomly selected for post-arrival testing at the airport. These two per cent travellers in each flight will be identified by the airline concerned, preferably from different countries.