The announcement of the proposed bill had led to protests in several north eastern states. 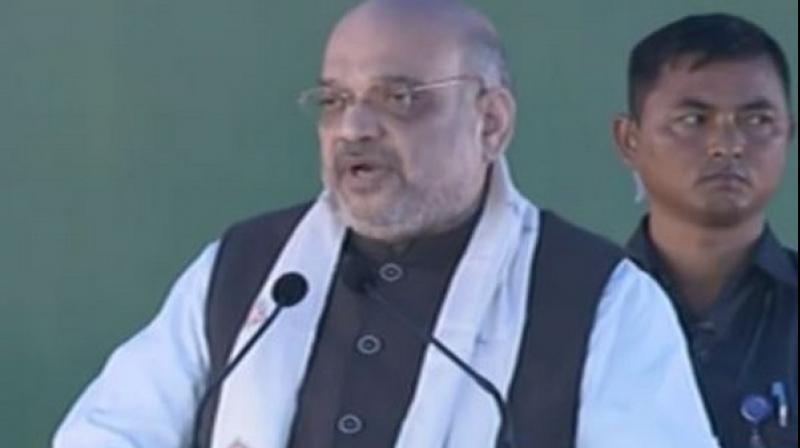 Aizawl: Union Home Minister Amit Shah assured people of Mizoram on Saturday that the draft Citizenship Amendment Bill will be altered to accommodate a ''special safeguard'' aimed at ensuring that it does not hamper a long-standing provision that checks the unabated entry of illegal immigrants in the state.

Amit Shah had said on October 1 that the Citizenship Amendment Bill would be passed in Parliament which will grant citizenship to Hindus, Sikhs, Buddhists, Jains, Parsis and Christians from Afghanistan, Bangladesh and Pakistan after seven years of stay in the country even if they do not possess proper documents.

The announcement of the proposed bill had led to protests in several north eastern states.

On Saturday, Chief Minister Zoramthanga met Amit Shah at the Raj Bhavan in Aizawl where the two leaders discussed several issues including the proposed amendment to the Citizenship Act, 1955.

The Citizenship Amendment Bill, 2019 could open a "floodgate of illegal immigrants" in Mizoram, Zoramthanga told Shah.

"As far as the Citizenship Amendment Bill is concerned, the Home Minister has assured that a new clause (related to the inner line permit regime in Mizoram) will be incorporated in the draft bill. We will work this out with the Home Ministry," Zoramthanga, who heads the Mizo National Front government in the state, told reporters after his interaction with Amit Shah.

He also called his meeting with Shah as 'good', NDTV reported.

It was Amit Shah's first visit to Mizoram after becoming the Home Minister. He was accompanied by Jitendra Singh, Union Minister of State for Development of the North Eastern Region, and Himanta Biswa Sarma, chairman of the Northeast Democratic Alliance.

Amit Shah also expressed confidence that Mizoram's capital Aizawl will be connected through a broad gauge railway line by 2021.

Inaugurating the handloom and handicraft exhibition organised by the North East Council here, Shah said the BJP-led government at the Centre had allocated more resources to Mizoram as compared to that by the UPA government.

"In the last five years, a lot of projects came to fore in Mizoram. A broad gauge railway line will be brought to Aizwal by 2021. The work for the 1700 kilometer National Highway (NH) has also started," said Shah.

The Union Minister said that the state has great potential in bamboo cultivation.
"In our government's first tenure, we took bamboo out of the category of plants that could not be cut under the Forest Act. The northeastern states have benefitted immensely from it," he added.

"There is a huge scope of employment in the sector of handicraft and handloom," he said.

He also assured Mizoram Chief Minister Zoramthanga of necessary assistance for the development of the state.

Shah expressed happiness on visiting "one of the most beautiful states in India" and called it an important representative of India's democracy.

He said the state was once "the centre of violence and separatism" but now it "symbolises peace and brotherhood."

"Once affected by insurgency and separatism, today Mizoram stands as a symbol of peace and fraternity and is giving this message to the whole world," he said.

Shah said it was one of the first handloom and handicraft exhibitions being organised in the North East.

He said the handloom holds the capability to generate huge employment opportunities in the North East and play an important role in the growth and development of the people.

Noting that India's northeast was rich in the availability of forest produce and other raw materials for the handloom and handicraft sector, Shah said Prime Minister Narendra Modi has been working tirelessly for the progress of the northeast.

"Narendra Modi government is totally committed to ensure the development of Mizoram and to find solutions to all kinds of challenges that the state is facing," he said.

The minister expressed confidence that Kaladan multi-modal waterway and creation of new border hats would bring huge opportunities for trade and commerce and projects such as the Greater Aizawl water project, state referral hospital, state sports academy, horticulture colleges, and a cricket stadium will boost development.