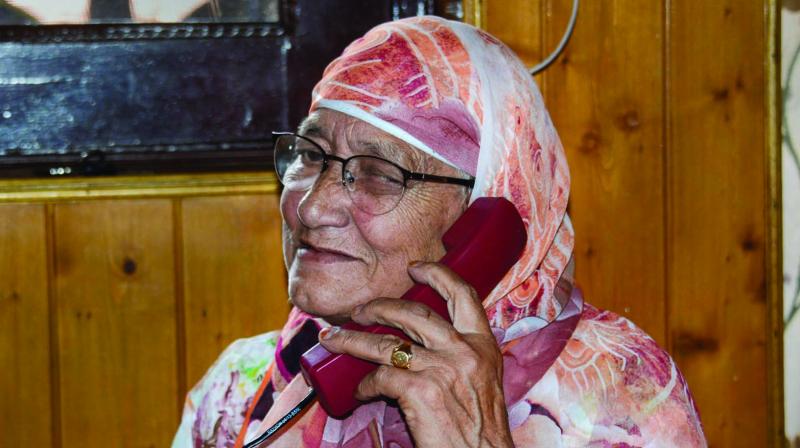 An elderly resident talks on phone after authorities in Kashmir restored 19 more telephone exchanges, a month after telephone services were snapped following abrogation of provisions of Article 370, in Srinagar on Thursday. (Photo: PTI)

New Delhi: With Centre saying that it was relaxing the curbs in the J&K “step by step”, the Supreme Court on Thursday said that it would hear on September 16 a batch of petition seeking the lifting of the month long lockdown, blockade of communication and information.

The bench of Chief Justice Ranjan Gogoi, Justice S.A. Bobde and Justice S. Abdul Nazeer directed that the hearing all the petitions relating to current situation in J&K would take place on September 16, 2019, even as some of the petitioners contested the claim that curbs were being relaxed step by step.

As attorney general K.K. Venugopal said that 80% of the landlines have been restored, a lawyer said that this was done from yesterday evening in view the today’s hearing of the petitions by the top court.

As court said that next hearing would take place on September 16, senior counsel Meenakshi Arora appearing for one of the petitioners said, “You are accepting the fact that in next ten days people will not be able to come out of their homes and breath.”

Senior counsel Vrinda Grover wanted to know on what basis there was a communication and information blockade.

Appearing for the Executive Editor of Kashmir Times Aruradha Bhasin, senior counsel Grover said that there was “intimidation” of journalists and the in the prevailing situation media persons were not able to work due to communication restrictions.

The court was told that it was based on the experience of the newspaper’s editor-in-chief who has traveled different parts of the State.

Counting the number of local newspapers that were coming out every day from Srinagar, Solicitor General Tushar Mehta wondered why Kashmir Times has chosen not to publish from Srinagar.

“My concern is why she chose not to publish her newspaper from Srinagar,” Mr Mehta asked.

The court on Thursday also decided to shift ailing CPM leader Mohammed Yusuf  Tarigami to AIIMS in Delhi. He has been allowed to be accompanied by one of his family members.

On the orders of the top court, CPM General Secretary Sitaram Yechury had met him in Srinagar last week and based on his report to the court, Tarigami is being shifted to AIIMS.