India is also upset with the fact that Pakistan did not agree to indicate that it will allow 10,000 additional pilgrims on special occasion. 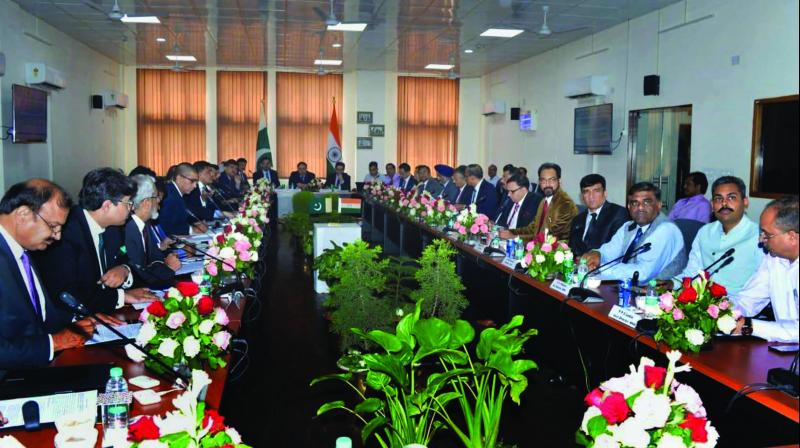 Indian and Pakistani delegation during the third round of talks on Kartarpur Sahib Corridor at Attari-Wagah border on Wednesday. The corridor will connect Darbar Sahib in Kartarpur with Dera Baba Nanak shrine in Gurdaspur district of Punjab. (Photo: PTI)

New Delhi: India and Pakistan have managed to iron out their differences on several issues but there still remain a few sticking points due to which the two sides failed to sign an agreement on the Kartapur Sahib Corridor following their talks at Attari on Wednesday.

Sources said that the differences remain mainly on three main issues during the third round of talks on the modalities for operationalisation of the Kartarpur Sahib Corridor — India is opposed to Pakistan’s plans wants to levy “service fee” of US$20 on pilgrims, Pakistan is against presence of Indian consular and protocol officials at the Gurudwara premises, and India does not want the draft agreement to mention that laws of Pakistan would apply within the Kartarpur Corridor premises.

The Indian delegation led by joint secretary, ministry of home affairs, while Pakistani side led by director general (South Asia and Saarc), ministry of foreign affairs. During the meeting, Pakistan insisted on charging fee of $20 (`1440 as on date) from each pilgrim within its territory arguing that the money will used for the infrastructure maintenance and others facilities of the Kartarpur Corridor. However, Indian sources said that Pakistan showed inflexibility on this issue and described it “redline” even as Indian officials strongly opposed this and asked Pakistan to reconsider their position.

Building its case for “service fee”, Pakistani officials argued that holy places around the world also charge and cited Mecca and Vatican fee regime. “Saudi Arab charges almost double the amount if you go for pilgrimage for the second time. There is no free pilgrimage for Vatican or for Mecca,” Pakistani sources said.

The second point of disagreement was over India’s demand to have its consular officer stationed in Kartarpur Sahib premises. Indian sources said that Pakistan showed inflexibility in allowing Indian consular presence or permitting protocol officials to travel every day to extend facilitation to pilgrims going to Gurudwara Kartarpur Sahib through the corridor. However, sources in Pakistan government said: “Our point is very clear, when there is no visa process involved, what is the point of having a consular official then?”

India is also upset with the fact that Pakistan did not agree to indicate that it will allow 10,000 additional pilgrims on special occasion. Citing infrastructure constraints Pakistani officials said that they could agree to allow “more pilgrims” on special occasions subject to available capacity but cannot give numbers.

“It seems they (Pakistani officials) came with a brief to not to conclude the agreement. They wanted to indulge in propaganda than serious talks. The Indian side urged them to take political guidance and reconsider positions taken,” sources said.

Differences also cropped up when Pakistan insisted on mentioning in the agreement that laws of Pakistan will apply within the Kartarpur Corridor premises. “India has been pressing not to make it officially part of the draft agreement. But this needs to come out very clear that whose laws would be applicable,” Pakistani sources said.

Meanwhile, there were several points of agreement between the two sides. This includes agreement on visa-free travel of Indian pilgrims, without any restrictions based on their faith. Persons of Indian origin holding OCI card too can visit.

It was decided that 5,000 pilgrims can visit Gurdwara Kartarpur Sahib using the Corridor every day and additional pilgrims, over and above the figure of 5,000, can visit on special occasions, subject to capacity expansion by Pakistan side. Sources said Pakistan has conveyed its commitment to increase this number to the maximum possible.

It was agreed that the Corridor will be operational throughout the year and pilgrims will have a choice to visit as individuals or in groups, and on foot. Shedding its initial reluctance, Pakistan has finally agreed to build a bridge at Budhi Ravi Channel. The Indian side is already making a bridge. Pending the construction of the bridge on the Pakistan side, both sides agreed to the crossing point coordinates of the temporary service road being built.

Both sides also agreed upon emergency evacuation procedures, especially medical emergencies. A direct line of communication between Border Security Force and Pakistan Rangers will be used for this.

The two sides also endorsed the decision arrived at the technical level meeting on 30 August 2019 regarding sharing of details of pilgrims using the Corridor and they agreed upon ensuring safe, secure environment for the movement of pilgrims. The Pakistan side agreed to make provision for preparation and distribution of ‘Langar’ and ‘Prasad’ for the pilgrims.