‘Shanta was idealistic and timeless in so many ways...’

Shanta Serbjeet Singh, one of our senior-most critics and writers on dance, was truly all this and more. 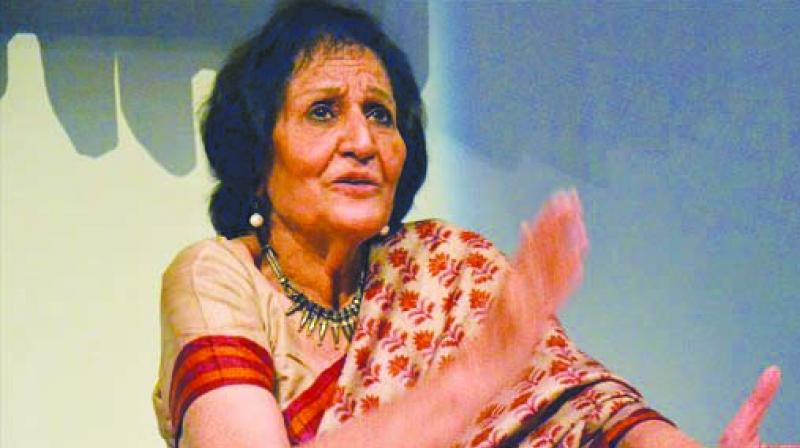 What all do you say about someone you have known for over three decades and read critiques by her for even longer? She was friend, mother figure and guide-philosopher all rolled into one. And not to forget the best informed person on the art scene. One could count on the fact that she would reach out to you with the specific hat that was most needed by you at that particular time. She was always able to call a spade by its name, and spared none in her writing or in person — she would say it with charm, wit and humour, but say it she would.

She was idealistic and timeless in so many ways, that is why she was mentor to several generations of dancers who looked up to her for support, for guidance and of course a kind write-up. She would do all this if she thought the objective was right, but if she thought the purpose or intrinsic quality of dance was missing, the devil may take the hindermost. Considering she was a canny woman, she was able to judge with unfailing accuracy the dance and the dancer both. Shanta Serbjeet Singh, one of our senior-most critics and writers on dance, was truly all this and more. Once in a while I would manage to cajole her to write for me when I was editor of the arts pages of the Pioneer.

I have been the recipient of her support when she insisted I speak to Atal Behari Vajpayee about a white paper I was writing on the culture policy. She set up the meeting and made me go the Parliament House to meet him since she thought very highly of him.

As usual she was proved right when a few months later her book on dance was being launched by Atal ji. On the cover was the photograph of a dancer in a Kathak outfit bending backwards so that only her side profile was visible.

There were about 10 of us die hard dance types in that room and not one of us could identify her. Atalji took one look and said, “Arre yeh toh Vyjayantimala hai!” And he was right — so was she in choosing a true connoisseur to launch her book.

A few years ago when I had staged Ehsaas, a multi disciplinary mobile art installation with 32 top performing artistes and visual artists, she had remarked, “Shabash! You have done what even the Sangeet Natak Akademi has not been able to do — put so many artists on one stage!”

It was high praise indeed coming from her and especially since she was the vice-chairperson of the Akademi at that time.

Alas we will miss her at this edition of Ehsaas next month.

Educated from Berkeley University at a time when women were barely getting to go to college, she lived and studied in the US by herself and on return married Serbjeet Singh, a painter who hailed from a royal family from Punjab. She endearingly referred to him as “Shoemaker”. I have shared some very lively moments with them when Serbjeet has been his acerbic and ribald best recounting some very entertaining instances of members of the royal clans of Punjab. She was ailing for some time now with age-related problems and I suspect of a broken heart after her beloved Shoeman was called away by the Universal boatman.

I am awash with countless moments spent with her and a clutch of memories. The endless cups of extremely fine tea served complete with a silver sugar pot I have drunk in her Delhi house where we were practically neighbours, the innumerable times when we have gone to concerts together when either she or I would pick up the other, and merrily bitched about the art scene! Once we were in Kolkata to cover a dance festival and staying in the same guest house. I can never forget how we would go our ways during the day and return in the evening to change into fresh rustling silk sarees before going to the concerts, earning the epithet of Dilli Billis from Bachi Karkaria!

Once we both happened to be in Dalhousie, a small hill station close to Pathankot where Shanta had a vast colonial style bungalow and on another hill a slightly smaller property where Serbjeet had shot episodes of his television serial on the Himalayas. She not only invited me for lunch, but insisted on showing me around to the other relatively hard to climb property and the surrounding orchard with the alacrity of a mountain girl.

Towering over others both physically and metaphorically, she lived extremely responsibly, was a die-hard yoga enthusiast, looked after her family with immense affection and patience. She was totally committed to the arts till the very end. And even she was confined to a wheelchair in the last few years, she would make it a point to attend important seminars and discussions till almost a month before. Miss her I certainly will and so will so many dancers...

Dr Alka Raghuvanshi is an art writer, curator and artist, and can be contacted on alkaraghuvanshi@yahoo.com