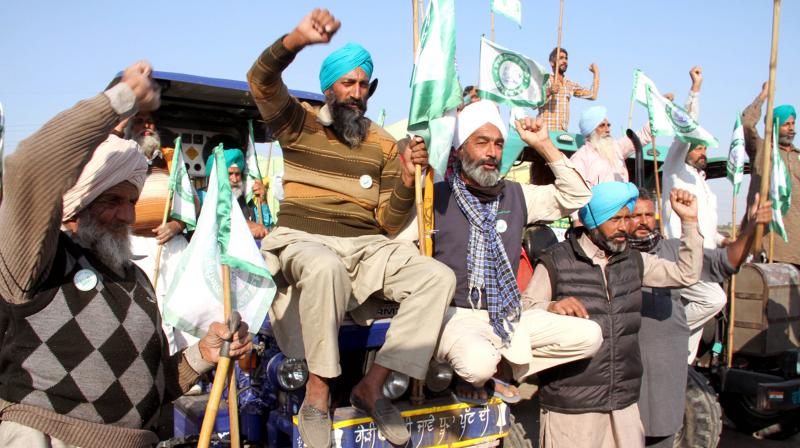 Farmers who came from Punjab and Haryana to protest against the new Farmers Law reached at Burari ground raising slogans to withdraw the anti-farmers law, in New Delhi. (DC Image:D. Kamraj)

NEW DELHI: With support pouring in from various quarters, the farmers protesting on the borders of Delhi seem all set to go for their meeting with Union ministers on Thursday in a belligerent and not a conciliatory mood.

On Wednesday, a day before their second round of talks with the Union government, the protesting farmers asked that a special session of Parliament be convened to repeal the three farm laws. They reiterated that if their demands are not met, they will intensify their stir by blocking all entry points to Delhi and hold a nationwide protest on December 5.

Union agriculture minister Narendra Singh Tomar along with minister of commerce and industry Piyush Goyal held a marathon meeting at home minister Amit Shah's residence to discuss ways to resolve the ongoing crisis. After the meeting, Mr Tomar said, “We will hold discussions with farmers’ leaders tomorrow. Let’s see to what extent issues can be resolved.” On Tuesday, his meeting with 35-odd farmers’ union leaders was “inconclusive”. The protesting farmers rejected the government’s offer to be part of a panel to look into their concerns.

Security officials said that the farmers are prepared for a long haul and seem prepared to continue their agitation for several months.

While Mr Tomar hopes to address the farmers’ concerns at Thursday’s meeting, the home ministry is taking no chances and has kept 50 additional companies of paramilitary forces on standby to meet any eventuality.

The All-India Motor Transport Congress (AIMTC), an umbrella body of goods’ vehicles operators, on Wednesday expressed solidarity with the protesting farmers and threatened to halt the movement of goods across north India and subsequently the entire country if their demands are not met. AIMTC also called for a strike from December 8 in support of the farmers’ protest.

“From December 8 onwards we will shut all our operations across North India and stop all our vehicles across North Indian states and Union territories, including Delhi, Haryana, Uttar Pradesh, Punjab, Himachal, and Jammu & Kashmir. We have decided that if the government still does not agree to the demands of the protesting farmers, then we will call for a Chakka Jam all across India and stop all our vehicles,” said AIMTC president Kultaran Singh Atwal.

As the standoff between the Centre and farmers continued for the seventh day, commuters faced a harrowing time on Wednesday with long traffic jams reported from various parts of the city.

Farmers are currently camping at five spots around Delhi, with tractors, trucks and trailers packed with food, water, medicines and essential goods blocking key entrances to the city. Heavy deployment of police force and barricades at various other entry points into the city worsened the traffic snarls in and around Delhi.

While police kept the Haryana-Delhi border at Singhu and Tikri closed for traffic, farmers from various districts of western Uttar Pradesh continued their sit-in at the Noida-Delhi border for the second day on Wednesday, leading to closure of a key route that connects the state with the national capital.

In Chandigarh, the police had to use water cannons to prevent Punjab Youth Congress workers from marching towards Haryana chief minister M.L. Khattar's residence.

More farmer groups and unions from Uttarakhand, Uttar Pradesh, Rajasthan and Madhya Pradesh are scheduled to reach Delhi by the weekend. With the number of protesting farmers likely to reach three lakh, reinforcements have been kept ready so that they can be deployed at a short notice at Delhi borders.

So far more than 40 companies of Central paramilitary forces and Delhi Police have been deployed all along the Delhi border to ensure that the situation remains under control.

The home ministry has also directed security forces to be extremely sensitive in handling the protesters who have garnered massive support from different quarters. The volunteers of the UK-based global Sikh charity, Khalsa Aid, have started providing langar, tea and refreshments and even medical help around the clock to protesters at Singhu and Tikri border.

Assuring his party’s support, Rashtriya Lok Dal vice-president Jayant Chaudhary met some protesters at Singhu border. He, however, dubbed his meeting as “non-political”.