India   All India  03 Dec 2019  Cops to register FIRs even if offence committed outside jurisdiction: Andhra DGP
India, All India

Cops to register FIRs even if offence committed outside jurisdiction: Andhra DGP

Sources further stated that this step was expected to send across a message that Modi govt was with marginalised sections of society. 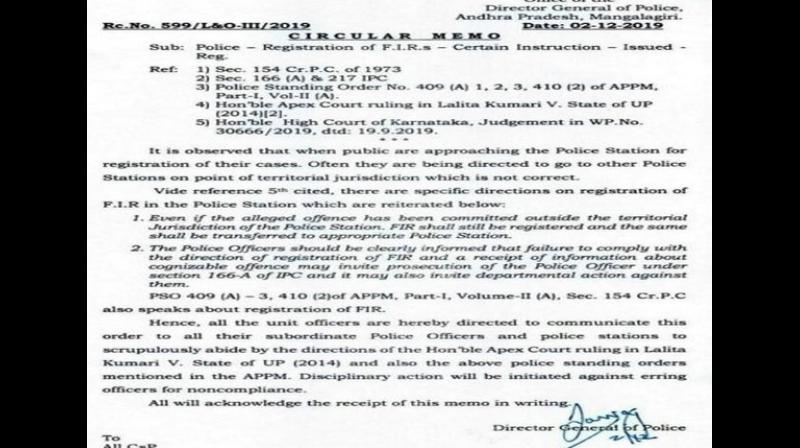 This move is expected to have massive ramifications on the nation's political landscape. The step will be significant as the BJP is often portrayed as the party against reservation. (Phtoo: ANI)

New Delhi: Prime Minister Narendra Modi-led government is set to renew the reservation provided to the marginalised communities like Scheduled Castes (SC), Scheduled Tribes (ST) and Anglo-Indians in the Parliament and the state legislatures.

Sources told ANI that the government was likely to further amend Article 334 of the Constitution which proposes to extend the reservation for these marginalized sections for another ten years.

Also, two MoS Parliamentary affairs V Murleedharan and Arjun Ram Meghwal and also senior officials from all ministries were a part of this meeting.

The top sources told ANI that the Centre was preparing the Bill to extend the 10 year period of reservation provided to the marginalised communities.

The need for an extension of the law was felt as the current reservation provision would end on January 26, 2020, and the government wants to get the approval of the Parliament ahead of the deadline.

This move is expected to have massive ramifications on the nation's political landscape. The step will be significant as the BJP is often portrayed as the party against reservation.

Sources further stated that this step was expected to send across a message that the Narendra Modi government was with the marginalised sections of society.

It was learnt that there have been several representations by these communities for the extension of reservation provided to them in various legislatures under the Indian constitution.

Sources stated that the Law and Justice Ministry has also been directed to formulate a draft at the earliest so that it can be introduced in the Parliament for its timely approval.

According to the Ministry of Law and Justice Article 334 of the Constitution lays down that the provisions of the Constitution relating to the reservation of seats for the Scheduled Castes and the Scheduled Tribes and the representation of the Anglo-Indian community by nomination in the Lok Sabha and in the Legislative Assemblies of the States shall cease to have effect on the expiration of a period of thirty years from the commencement of the constitution.

Although the Scheduled Castes and the Scheduled Tribes have made considerable progress in the last thirty years, the reasons which weighed with the Constituent Assembly in making provisions with regard to the aforesaid reservation of seats and nomination of members, have not ceased to exist.

It is, therefore, proposed to continue the reservation for the Scheduled Castes and the Scheduled Tribes and the representation of Anglo-Indians by the nomination for a further period of ten years.