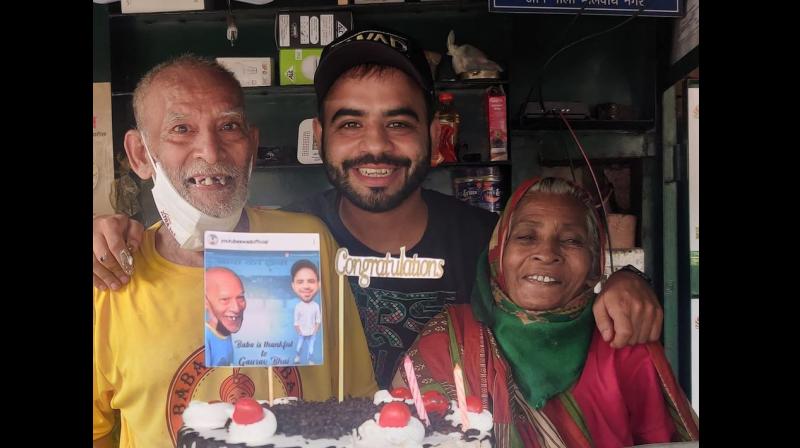 Kanta Prasad (80), who runs the now famous Baba Ka Dhaba in Malviya Nagar, South Delhi, has filed a complaint against YouTuber Gaurav Wasan for allegedly misappropriating donation money that was raised to help him and his wife.

Gaurav had posted a heart breaking video of the elderly man and his wife on October 6, which showed the couple talking about lack of customers at the eatery in Malviya Nagar, post lockdown, following which several people donated money.

A day after this heartbreaking video, #Babakadhaba was trending on Twitter and the food joint was flooded with more customers than it had seen in the last 30 years of being in business.

On Kanta Prasad (owner of Baba ka Dhaba) told a media organization that he had only received a cheque of Rs 2 lakh from Wasan “I don’t get a lot of customers now; most people come here to take selfies… Earlier I was earning over Rs 10,000 per day, now it’s Rs 3,000-Rs 5,000,” he said.

The complaint filed by Prasad, along with a group of men, at Malviya Nagar police station Saturday claimed Wasan “deliberately shared his and his family’s bank details and collected a huge amount as donation”.

DCP (South) Atul Kumar Thakur said, “We received the complaint yesterday and are enquiring into it.” However, no FIR has been registered yet.

In their respective videos, the YouTubers were seen urging the public to help the needy around them instead of blindly donating to someone all the way in Delhi. The YouTubers had also raised their concern about how people were travelling from other cities to Delhi to donate to Baba ka Dhaba instead of donating to the less famous needy residing in the next street.

Last week, Youtuber Lakshay Chaudhary also raised a concern over how the donations were being collected by Gaurav Wasan in his own bank account, which seemed fishy. The video gained 1M+ views following which many nitezens took to internet to question Gaurav Wasan about the appropriation of donated money and few even spoke about the double standards of donors who donated to Baba ka Dhaba.

1. In the Initial video released on Oct 6 2020 on Gaurav Wasan's YouTube channel 'Swad official', which now has 3.3M + views, Gaurav was heard saying that the couple had only made a sale of Rs 50 from 9:00 AM - 1:30 PM. The couple was also heard saying that they were struggling to make both ends meet and often the investment exceeded their income. However, in the police complaint, the owner of Baba ka Dhaba said that his average daily sale was worth Rs. 10,000 until the video went viral after which the sale decreased to Rs 3000 to  5000 per day as people were more interested in taking selfies than eating at the dhaba.

In the same video, Baba also said that his life had changed and perhaps become better after Gaurav's video went viral as it attracted more customers along with donations. But, the narrative given by Baba in the police complaint contradicts what he was heard saying in the videos uploaded on 'Swad Official'

3. On October 7 and 8, 2020, Gaurav posted a video on his Facebook page in which both Baba and Gaurav were seen informing the viewers that they had received sufficient money and needed no more. Subsequently, they also urged the viewers to help other needy people, which again contradicts the possibilities of ‘financial difficulties’ mentioned in the police complaint.

4. On Oct 28, 2020, Gaurav uploaded a third video on YouTube. In this video, he showed proofs of donations and clarified various user queries. This video also contains a small clip of Baba and Gaurav in which Gaurav can be seen handing over a check of Rs. 2,33,000 to Baba. He's also heard saying to Baba that Baba's remaining money was safe with him and he will provide the same to Baba in no time.

Gaurav denied the allegations and said he transferred all the money into Prasad’s account. He said “When I shot the video, I didn’t know it would become this big. I didn’t want people to harass Baba (Prasad) so I shared my bank details…” Wasan shared three receipts of the transactions, all dated October 27 — two cheques of Rs 1,00,000 and Rs 2,33,000 and one receipt of bank payment of Rs 45,000. He said this was the amount of money collected in the three days. Wasan also put up a bank statement on Facebook in which the total money credited in the three days is around Rs 3.5 lakhs. When he was asked about the other two transactions, Prasad said he wasn’t been able to check his account as he doesn’t carry his phone.

Public Response :
However, social media users seem to be growing dissatisfied with his explanations. Many YouTubers even raised a concern that excel sheets shared as proof of funds received doesn't qualify as a valid proof as they can be edited. Moreover, the comment section of Gaurav's latest clarification video on YouTube has now been turned off.

While some YouTubers alleged Wasan received Rs 20-25 lakhs, Wasan denied it and provided more clarity on the matter in a video posted on his YouTube channel on Oct 28, 2020. He said, “We have initiated legal action against the YouTubers.”