New Delhi had asked the two concerned Pakistan HC officials to leave the country within a day. 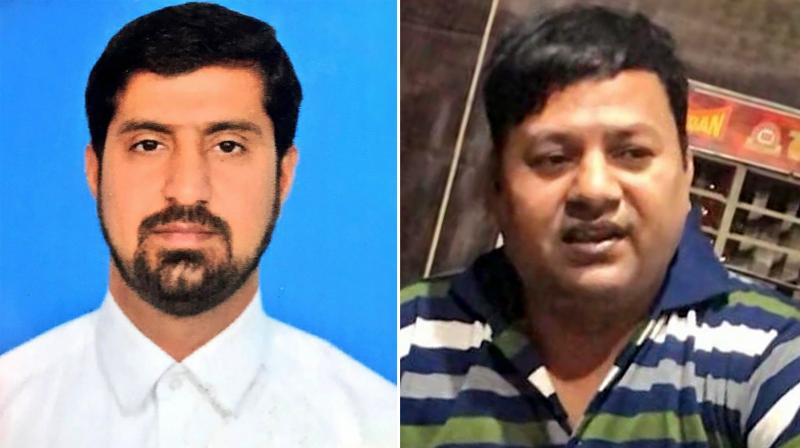 Abid Hussain and Muhammad Tahir, two officials of the Pakistan high commission who have been apprehended by Indian law enforcement authorities for carrying out espionage activities in the country. (PTI)

New Delhi: Rejecting the claims of Pakistan that two of its High Commission (HC) officials had not carried out any espionage, Indian Government sources on Monday said the two Pakistani officials had been caught “red-handed” but had not been subjected to any “torture” as alleged by Pakistan.

India had on Sunday summoned the Pakistani Cd’A in Delhi and had issued a “demarche in which a strong protest was lodged with regard to the activities of these (two) officials of the High Commission of Pakistan against India’s national security”.

New Delhi had asked the two concerned Pakistan HC officials to leave the country within a day and had declared them persona non grata. Pakistan has denied the allegations. Speculation is meanwhile rife that Islamabad may take further retaliatory action to expel Indian diplomats. New Delhi appears to be bracing for some retaliation.

Late on Monday evening, Indian Government sources said that the assertions of the Pakistan foreign Office were false. "The two (Pakistani) officials were caught red handed while indulging in espionage activities. They did not disclose their identity that they were High Commission officials. When they were taken into custody and questioned, they confessed to indulging in espionage and also informed that they were High Commission officials. The Pakistan High Commission was immediately informed and then handed over. They were never subjected to any torture. They have also undergone medical examination. Pakistan appears to be making false accusations and possibly creating ground for some tit-for-tat reaction and torture of Indian officials in Islamabad.”

Pakistan had earlier lashed out at India and issued a demarche to it and had summoned the Indian Charge d’Affaires (Cd’A) in Islamabad in a retaliatory move.

In a statement, Islamabad said, “Indian Charge d’Affaires summoned to the Foreign Office for a demarche over declaring two officials of Pakistan High Commission persona non grata. The Indian Charge d’Affaires was summoned to the Foreign Office for a strong demarche, conveying Pakistan’s condemnation of the Indian decision to declare two officials of the High Commission for Pakistan in New Delhi persona non grata ... .”

In a statement on Sunday, New Delhi had said, “Two officials of the High Commission of Pakistan in New Delhi were apprehended today by Indian law enforcement authorities for indulging in espionage activities. The Government has declared both these officials persona non grata for indulging in activities incompatible with their status as members of a diplomatic mission and asked them to leave the country within twenty four hours.”

New Delhi had added, "Pakistan’s Charge de Affaires was issued a demarche in which a strong protest was lodged with regard to the activities of these officials of the High Commission of Pakistan against India’s national security. Pakistan's Cd’A was asked to ensure that no member of its diplomatic mission should indulge in activities inimical to India or behave in a manner incompatible with their diplomatic status.”