The aesthetics and organisation of the festival both on and off stage were impeccable, with excellent public and private, national and local support. 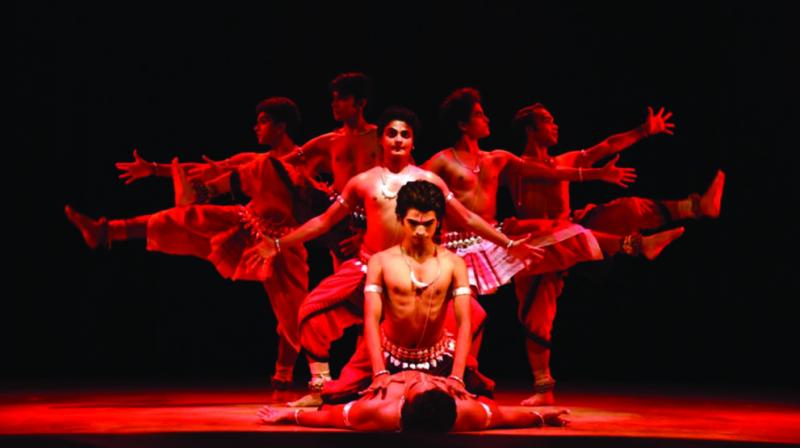 The Srjan annual Guru Kelucharan Mohapatra Award Festival must certainly rank as one of the nation’s best organised private classical music and dance festivals. Curator Ratikant Mohapatra has a winning formula — bringing top notch Indian classical and fusion music and dance to Bhubaneswar audiences in conjunction with honouring outstanding contributors to the performing arts with an award named after his illustrious father.

The respect, love and admiration for Guruji’s role in resurrecting Odissi dance from near extinction to eminence on the national and world stage was felt and expressed by performers, awardees and attendees. Larger than life photographs, many by awardee dance photographer Avinash Pasricha, flanked the Rabindra Bhavan entrance accompanied by quotes. My favourites were Guru Kelucharan Mohapatra’s:

“Odissi in not a mere dance form to entertain people but to inspire and elevate. I don’t actually dance but pray in compassion and the spectators say that this ‘form’ is dancing.” and also, “In the vibrant tradition of Odissi that has sustained me all my life, a fountainhead of unending inspiration, and as long as Odissi is practiced and performed with devotion and grace, I shall continue to live in joy and harmony”

The entrance and lobby were decked with images of past awardees, festivals and from Ratikant’s recent book of photographs that captured moods and memories for an audience for whom he was a household name if not more. The aesthetics and organisation of the festival both on and off stage were impeccable, with excellent public and private, national and local support.

Srjan marked this 25th anniversary with a festival expanded to seven from five days. This provided a stage to a wide range of local professional and semi-professional Odissi dance groups from a panorama of Odissi dance techniques with just one group presentation niche kept for Guru Kelucharan Mohapatra’s style represented by Srjan. This made for a warmly inclusive festival that promoted goodwill across the local Odissi dance community. Productions ranged from nuanced themes and techniques to powerfully dramatic jatra-style interpretations.

Absolutely superb music opened the first six evenings. The local audience was well rewarded with memorable and accessible performances. Anup Jalotra charmed the audience with his mellow tones and warm connection; his ghazals were a perfect opening for this national festival in Odisha with a pan-India appeal. A classical music fusion of flute by Paras Nath, mandolin by U. Rajesh, violin by Deepak Pandit with Prashant Sonagra on tabla was amrit for the ears. All hail from venerable lineages of classical music and have crossed all borders to be world renowned.

The next three evenings were Hindustani music by Sabir Khan on sarangi, Indrani Mukherjee’s vocal and Debasmita Bhattacharya on sarod. All were solid gold. Sabir Khan’s playful expressions and quicksilver shifts swimming in the ocean of his art reminded me of Zakir bhai. He ended with a song his father Sultan Singh made for his own mother and dedicated it to Guruji. I could feel the loss, pain, acceptance and anand of remembrance.

Indrani Mukherjee’s Benaras Gharana base and creative expression carried the audience soaring through monsoons via a khayal in raga Kedar and leaving a lasting impact with a kajri in raga Pilu and her concluding bhajan in raga Hemant. Bandishes celebrating the oncoming of Durga Puja, Jaya Durge Ma were beautifully interwoven into Debasmita Bhattacharya’s sarod opening piece followed by compositions of the legendary sarod exponent, Pandit Buddhadev Dasgupta.

Odia music took centrestage, opening the sixth festival evening with the distinctive voice of Dr Bijay Kumar Jena. In the ongoing regional and national discussion regarding recognising a unique classical status for the music of Odissi, performances like this are necessary to move the issue forward. Accompanied by Satchidananda Das on mardala, Srinibas Satpathy on flute, Balakrushna Jena on harmonium, Sitakanta Jena on manjira, Bijay Kumar Jena’s melodious performance highlighted some of the nuances and facets unique to Odissi music, singing prabandhs by great Odia poets Banamali and Benudhar, a janana, He Narayana written by Abhirama Paramahansa and concluding with a composition by Kavi Samrat Upendra Bhanja.

Now on to the panorama of 12 Odissi performances! The sole solo presentation was an accomplished offering of Bihag Pallavi and the Vatsalya Odia Braja Ku Chor by Niharika Mohanty from California performing Guru Kelucharan Mohapatra’s choreographies. She is doing a wonderful job of maintaining Guruji’s style in the US and Canada. A broken ankle prevented her accepting an earlier festival invitation; hence it was a pleasure to see her cross the seven seas to be part of this special year.

Meera Das’ Gunjan Dance Academy performed on the opening night with her charming Moods of Rhythm choreography set to Daneswar Swain’s music and rhythm. I enjoyed her refreshing nritta choreography that was pure Odissi but with a lovely tang of local elements both in the variety of traditional musical instruments included and the tala anga of body waves and Jagannath jula movements that had been purged initially when Odissi sought classical recognition and slowly have returned. Her group choreography of Kelucharan Mohapatra’s Das Avatar was developed with visually appealing and tight sancharis, such as Narasimha starting as a sharp group image then quickly individuated with an effective variation on the actual conflict with Narasimha hidden within a pillar of dancers.

Pitambar Biswal’s Suravi troupe began the second evening of Odissi with Durga Charan Ranbir’s choreography of Suryaasthaka. With music by Ramhari Das and rhythm by Niranjan Pata, this classic Guru Debaprasad Das-style composition had good group discipline led by one expressive dancer and ended with a fine closing tableau.

While Aruna Mohanty was off dancing across America, one of her troupes from the Orissa Dance Academy, founded by Guru Gangadhar Pradhan in 1975, offered an innovative Ode to the Father of the Nation — Ahimsa. With music again by Ramhari Das, rhythm by Dhaneswar Swain and a script by Kedar Mishra, this polished professional production provided an inspiring historical dance drama well designed for a general audience in a large stadium. I was impressed with the quick changes of the artistes, the commitment to all khadi costumes and the abstraction of movement and image in the charkha section. I was reminded of the powerful dance ballets I saw in the 1970s, expressively performed and upgraded with projected visuals.

I found the Rudrakshya Foundation’s Yaha Krishna Saha Kaali a profoundly elegant and meaningful interpretation of Krishna and Kaali, Shyama and Shyamaa as aspects of ultimate maya or illusion. With a wonderful music score by the same compositional team as Aruna Mohanty, Bichitrananda Swain’s choreography brought out succinct contrasts and comparisons with superbly trained male dancers who easily shift from fierce to feminine. The physical intimacy that can appropriately be shown by two men in Odissi as nayika and nayaka reminded me of the same quality in Mayurbhanj Chhau danced by Madan Babu and Krishna Chandra Naik in yesteryears.

Beautiful images exploring the deep connections between rain and love were charmingly represented by Jyotsna Rani Sahoo’s Soor Mandir from Cuttack. Gajendra Panda’s Tridhara drew effectively on his background in the Ganjam district’s rich cultural traditions coupled with the Guru Deba Prasad Das gharana. Prahalad Natak verses to Lakshmi Nrusingha in the mangalacharan and a Ram bhajan drawn from the Nagarakirtana tradition of South Odisha propounding the narratives of Daskathia, another popular folk form of Ganjam brought out the vigour of a fast fading heritage.

Niranjan Rout is a stalwart on the Odissi scene for decades and it was a pleasure to see his group, Nupur, present Khamaj Palalvi and his Shiva Stotram sharing their joy in the dance with good effect. Art Vision’s Akshara had the wonderful concept of interpreting the Odia alphabet through dance. The appealing music by Lakshmikant Palit had sweetness in the singing, Devdas Chhotray’s script was first rate and the sand animations by Sudarshan Pattnaik projected behind the dancers was captivating. The choreography, aimed at being childlike, was simplistic and could be best presented in schools and even by school students for their peers.

Mun, the Immortal Devil was a highly theatrical production by Ashok Kumar Ghosal’s Nrutyashala. The destructive stories of three yugas and the present were captured with a sharp staccato style of movement choreography and strong poses.

Jagannath Gopinath by Durga Charan Ranbir’s Nrutyayan ensemble connects the earlier form of Lord Krishna in Dwapara Yuga and the rituals of Lord Jagannath at Puri with a script by Kedar Mishra based on texts including the Skanda Purana, Bhagavata by Atibadi Jagannath Das, and the poetry of Shri Goura Charan Adhikara and Shri Banamali Das. The fine choreography included evocative visualisation of the deities, Subhadra being carried, Balabhadra’s jula movement and the Krishna leela concluding with a very pleasing mokshya by all 10 dancers.

On the concluding evening, Srjan gave the penultimate performance of their Namami Gange performed with their trademark high standards of synchronisation, pacing, attractive choreographic patterns and efficient exposition of story interspersed with well conceived abstractions, clear without becoming lokadharmi.

The NALCO Guru Kelucharan Mohapatra Award of one lakh each was awarded to the outstanding Odia percussionist Guru Harmohan Khuntia; Guru Durga Charan Ranbir, a brilliant exponent of Guru Deba Pasad Das’ gharana of Odissi, dance historian and scholar Dr Sunil Kothari, iconic photographer Avinash Pasricha, and dance writer Leela Venkataraman who said this was the pinnacle of her career after a 65-year association with Odisha.

Srjan, under the direction of GKCM’s son Ratikant, has done stellar work in presenting and promoting Odissi and other performing arts and artistes of India to Odisha and the nation through their annual award festivals. A fitting tribute to the great Kelubabu.

Sharon Lowen is a respected exponent of Odissi, Manipuri and Mayurbhanj and Seraikella Chau whose four-decade career in India was preceded by 17 years of modern dance and ballet in the US and an MA in Dance from the University of Michigan. She can be contacted at sharonlowen.workshop@gmail.com