Watch: 'How will you guarantee my safety?': Student asks UP cop on Unnao case

Muniba Kidwai said, 'You said we should raise our voice and protest. We know a teen was raped by a BJP leader.' 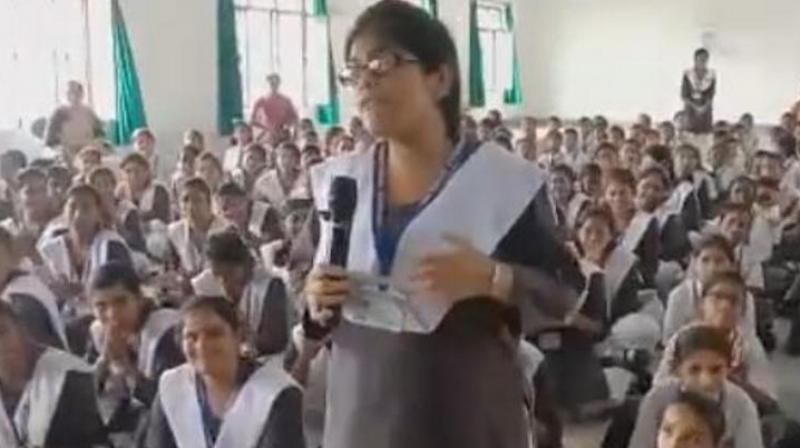 She also asked if they protested how police would ensure justice. (Photo: Screengrab)

Lucknow: A senior Uttar Pradesh police officer faced uneasy moments when a girl, during a safety awareness campaign event, asked him if she would face the same fate as the Unnao rape survivor, whose vehicle was hit by a truck in which her two aunts died.

Muniba Kidwai, a class 11 girl of Anand Bhawan School said, “You said we should raise our voice and protest. We know a teen was raped by a BJP leader,” adding, “Everyone knows it was no accident. The truck number plate was painted black. It is one thing to protest when an ordinary person is involved, but what when the person is someone powerful? We know no action will be taken if we protest and even if action is taken, it will be of no use. The girl is in a critical state.”

school girl narrates the sufferings of the #Unnao Victim and her family and asks the cops if we common citizens raise our voice will we get justice?
The cops were at the school organising a function on women security in #Barabanki @Barabankipolice @scribe_prashant @Uppolice pic.twitter.com/vEUxsW62ri

She also asked if they protested how police would ensure justice. “How will you guarantee my safety? What’s the guarantee nothing will happen to me,” she added.

It was the last day of government’s much-touted Community Action to end Violence Against Children (CAVACH) campaign. During the campaign, children were being made aware of the safety schemes and to rise against harassment.

On Sunday, the car in which the Unnao rape survivor, her family and lawyer were travelling was hit by a truck in Rae Bareli, killing her two aunts and leaving her and the advocate critically injured.