Woman delivers baby 30,000 ft. up in the air, as the flight’s forward galley and lavatory turn into makeshift labour room 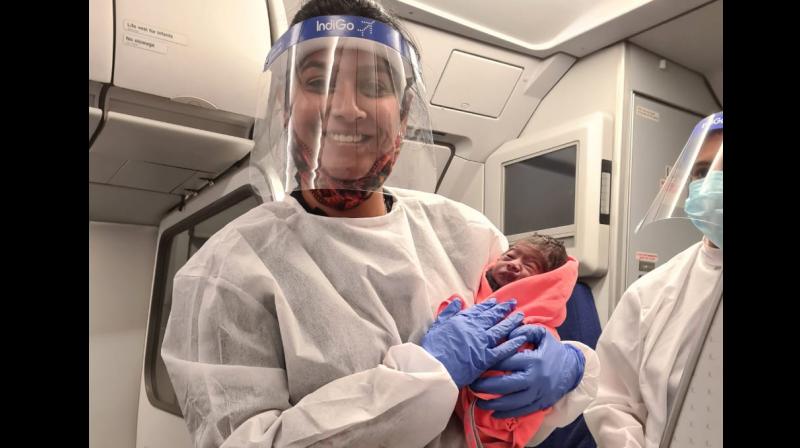 Dr Sailaja Vallabhaneni with the newborn on the flight

It was to be a normal routine flight for the crew and passengers travelling on board Indigo’s 6E 122 from Delhi to Bengaluru on October 8, coincidentally the eve of the 88th Indian Air Force (IAF) Day. However, the scenes on-board changed swiftly after taking off at 5.30 pm. Sometime after being airborne, the crew learnt that an expectant woman passenger, Monika Bakshi in her 30s and travelling alone, was feeling restless.

What followed on that flight shall be engraved in the history of aviation. The surreal experience involving a full range of emotions as the situation unravelled rapidly at over 30,000 ft. in the air was a miracle that the crew members and passengers of the flight witnessed. Monika gave birth to a baby boy.

Flight captain and former Wg Cdr, IAF Sanjay Mishra, recounts the events as they unfolded. “The lady told us that she had not eaten anything since morning. Our crew members comforted her; she was given fluids and something to eat. A little later, her anxiety and restlessness began to increase. She also started complaining of stomach pain, which is when we paged for a doctor,” shares Captain Sanjay.

By divine destiny of this would-be new-born, there were two accomplished doctors on board — Dr Nagaraj, a plastic surgeon from King Fahd hospital in Riyadh, and Dr Sailaja Vallabhaneni, Consultant Foetal Medicine, at Cloudnine Group of Hospitals in Bengaluru. Dr Sailaja recalls the experience. “After someone called for a doctor in the flight, Dr Nagaraj stood up to help. In the next ten minutes, I could hear another panic-stricken call from the crew members. I went up and introduced myself and was told about the pregnant woman experiencing pain and discomfort. Initially, I thought she was aborting because these are the common symptoms at gestational age and at a high altitude,” she says. “She wanted to use the washroom and when she walked to the toilet, there was blood stained liquid on the floor. I realised her water had broken.”

The doctor then smiles and tells us that it seemed to her then that she was all set for this event — she was wearing gloves, a mask and a face shield. “Thanks to the pandemic,” she says with a good-humoured chuckle.

Born in the sky

Cabin crew members rose to the occasion and swiftly and efficiently converted the forward galley and the lavatory of the flight into a makeshift ward/labour room, taking all necessary precautions.

Despite panicked passengers and limited resources, Dr Sailaja didn’t lose focus. “I knew Monika had gone into labour and the foetus was coming out. I headed to the lavatory and delivered the baby in the bathroom at 7.40 pm,” says the doctor.

The premature but healthy baby boy, weighing around 1.8–2 kg, cried for the first time. The doctor brought him with his umbilical cord still on and placed him on the crew’s serving table. “I feel certain things are destined to happen. I am a gynaecologist but I fully practice foetal medicine. I haven’t practiced deliveries for over ten years, but you always know your roots and I just went back with the presence of mind,” shares the doctor. As cord clamps weren’t available, the doctor clamped the cord using gauze and cut the cord with scissors sterilised with a hand sanitizer. Then, both Dr Nagraj and Dr Sailaja resuscitated the little one with the minimal equipment on board. “I had two injections in my medical kit, which Dr Nagaraj loaded and I used on her to stop the bleeding. We asked the passengers to help with panties, dippers, sanitary pads they had so I can use it for the mother. And everyone on-board was supportive,” confirms Dr Sailaja.

As the doctors tended to the mother, the crew took on the new-born’s care. Monika was happy she’d delivered a healthy baby. Soon, Dr Sailaja handed the tiny one to Monika for breastfeeding and let the pilots know they didn’t have to take a detour to another airport as the baby and mother were fine.

Confessing the whole incident left him with goose bumps, the captain of the flight shares how nervous he was waiting for a final update from the doctors.

“As I was mulling over the news of the pregnant woman, I sensed a sudden increase in the activity levels in the cabin, and then screaming, shouting, clapping and a faint cry of what sounded like a newborn,” recollects Wg Cdr Mishra. “I’ve never witnessed fortunes turning so swiftly and so miraculously. Don’t think there was a single soul on board who didn’t have goose bumps on him or her at that moment.”

For the first time on that flight, a “Post Landing Birth on Board” form was filled on-board, interestingly numbered “FFS 007.”

“We had the uninterrupted high-speed run. On ground, amidst all the frenzy, there was genuine a sense of happiness and joy amongst all present, including the staff of Bengaluru Airport and Aster Clinic Bengaluru, where the mother and baby were admitted to and discharged from the next morning. People seeking reasons to celebrate in these gloomy times got one. There were banners, chocolates and gifts, and the brave mother was given a rousing reception,” recounts the captain. After about-two-hours’ struggle, the captain finally got to meet his extra passenger, “007”. “I had a look at his face. Of course, he was unaffected by all the commotion around him,” expresses former Wg Cdr Mishra, IAF, adding that he couldn’t have asked for a happier Indian Air Force Day eve.

Qaadu expands its horizons with 200+ stores in India and UAE

The Different Types Of Innovations In Shooting Glasses