The third edition of the International Fame Awards (IFA) ceremony was held in India’s capital city, New Delhi on October 30 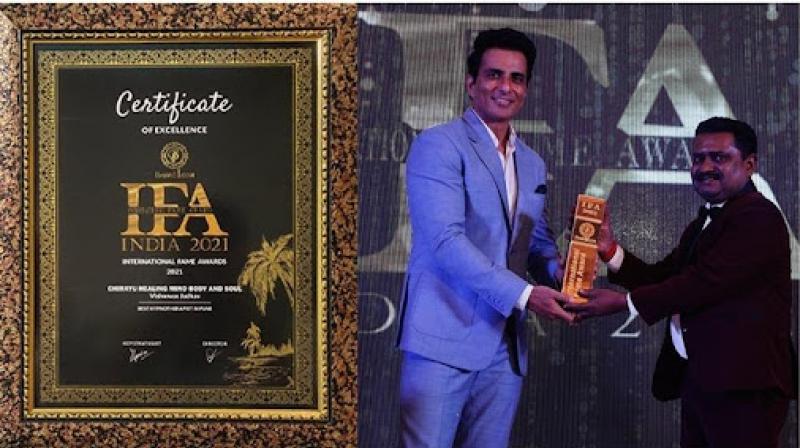 Famous Bollywood Actor Sonu Sood who graced the occasion with his august presence presented the award to Vishwwasji.

Hypnotherapist and Thetahealer, Vishwwas Jadhav was recently felicitated with the prestigious International Fame Awards (IFA) 2021 for the 'Best Hypnotherapist'. Famous Bollywood Actor Sonu Sood who graced the occasion with his august presence presented the award to Vishwwasji. The grand event was hosted by Brand Icon to recognize the outstanding achievements of various services providers across all segments and verticals.

The third edition of the International Fame Awards (IFA) ceremony was held in India’s capital city, New Delhi on October 30. The award saw the massive participation of distinguished people from various fields who, for their exceptional service to society, were awarded in different categories. Dedicating his award, Vishwwas Jadhav thanked his clients and the jury members for recognizing, nominating, and making him win the award for his relentless and selfless services during the Covid pandemic, particularly during the second wave of the Covid.

Commenting on the major achievement, Vishwwas Jadhav, the founder of Chirayu - Healing Mind Body and Soul says, “It is indeed a great honor for me to get an award of such a high value. Getting recognized and appreciated for your efforts is something that everyone desires and this prestigious award has further emboldened my resolution to work even harder and serve the people in whatever capacity I can.”

Vishwwasji, apart from being a Clinical Hypnotherapist and Thetahealer, is also a Reiki Master and runs a healing center in the City of Pune. A relatively known figure among the locals, Vishwwasji is experienced in curing obsessive-compulsive disorder (OCD), Polycystic Ovarian Disease (PCOD), Study issues, and problems related to Health, Relationship, Business, and Money. He is also specialized in curing and healing clinical issues related to breast, liver, kidney, lung cancer and clearing heart blockages.

Scouting the field of Production Engineering for over 20 years, the virtuoso has worked with companies like Wipro, Videocon, and Haier Appliances on a capacity as Six-Sigma Master Blackbelt, MR for ISO:9001,2000 ISO 14000 and OHSAS also implemented SAP for Wipro consumer care and Lighting, and head SAP project of Haier Pune.

Based on 43 reviews, his Google Page rating is 4.9 and according to 183 reviews, the Justdial rating is 4.9. His diversified experience has helped him excel through all walks of life and contribute to the greater good.