Entertainment   TV  08 Feb 2017  There is more of me in my books, says Padma Lakshmi
Entertainment, TV

There is more of me in my books, says Padma Lakshmi

Super model and television host, Padma Lakshmi speaks about her ramp debut in India and more. 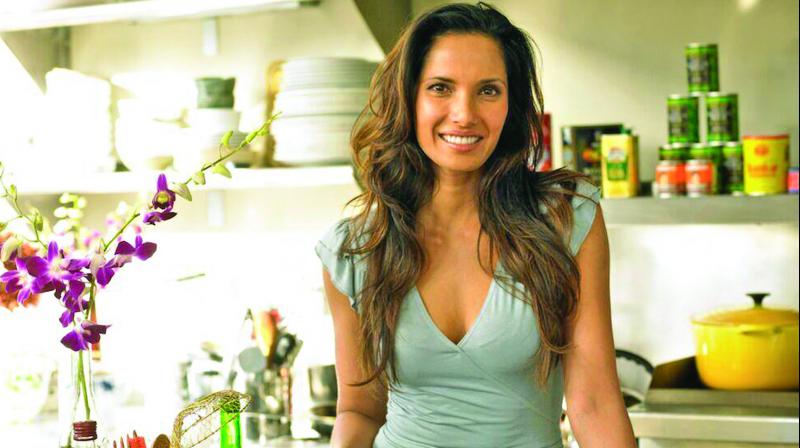 I write cookbooks and I’m an actress — two things that aren’t always compatible, at least for the waistline,” those are her words that precisely define her. Though modelling and food may not always have space for congruence, she’s made them come together in a way that has left the world in awe, and could even make the planet fall in love with one of our country’s most iconic dishes — a humble bowl of curd rice.

Give her a little ramp space and she knows just how to set it on fire.  Leave her with a few spices and she knows her way to cooking up a dream meal and document it through a cookbook that knows how to satiate your taste buds. Just as impassioned as she is about her lentils, she also does not shy away from speaking up for the causes she believes in. Emmy-nominated Top Chef host, food writer and super model, Padma Lakshmi, has been instrumental in bringing varied worlds together.

As she visits Indian cities to speak about her recent books, in an interview with The Asian Age, Padma, ahead of her pitstop in Chennai, speaks about how the Tamilian in her is the reason for her love of food, her recent debut on an Indian ramp at the Lakme Fashion Week among other things.

Considering your roots, is there a bit of influence that Tamil lineage gives to your food choices?
I feel very connected to my South Indian roots. I don’t struggle with this or feel I have to reinforce it. It’s always a pleasure to come home and this time its doubly sweet because it’s through my writing and not just familial ties. I have so many fond memories of my life here in India. Many of them which found their way into my memoir, Love, Loss, and What We Ate.

I’m sure my love of spices and particularly chillies comes from being a Tamilian. From very early on, I can remember making pickles and spice-blends with the women in my family. And I believe this fascination has led me not only to my career in food but fuelled the passion for my other book, the most recently released, The Encyclopedia of Spices and Herbs.

My comfort food always involves rice with some sort of lentils and vegetables coupled with yogurt. I’m pretty basic and simple with my daily cooking and am usually plant based at home.

Was it an emotional journey penning your memoir?
Most of my recipe writing and essays have always been very personal. With the memoir, my writing took a deeper turn and I was probably trying to make sense of my unconventional upbringing and life. It was a challenge as a writer, but also as a woman beginning motherhood. And, I wanted to document my own journey not only for myself, but for my daughter to read one day.

I have a feeling she’ll read it before I think she’s actually ready but the good news is that she’s already heard or lived through whatever is appropriate for her to know for her age and I’m sure this will continue along the way to reading the book for herself.

What was it like walking the ramp at the recent Lakme Fashion Week?
I’m extremely happy and excited that Tarun Tahiliani has given me the opportunity to be part of Lakme Fashion week. While I’ve spent years doing well in Milan, Paris, and New York, I never really worked on Indian soil because I didn’t live here and it was so far from the rest of my career. So, I’m incredibly honoured that after so many years I’ve been given the chance to experience it and I can’t think of a better designer to make my debut.

You have recently made your presence at the Women’s March in Washington D.C. What made you take it up?
I think for most Americans in the last few generations we’ve heard of civil protest but we haven’t seen it in action. I think the Women’s March and the ongoing protests against institutional suppression of civil liberties is something my generation is rediscovering. Because, we realise rights we have taken for granted, that our mothers have fought hard for, are in jeopardy in a very real and permanent way. American democracy allows for the possibility of anyone becoming president, but it doesn’t always ensure that the best person for the job will actually be elected to that office. A government by the people and for the people is also susceptible to people’s misjudgments  The country is definitely divided, but I think that real growth can come out of these short term growing pains that we’re experiencing as a culture. For all intents and purposes America is a young country and so we’re still learning how to rule ourselves. And, as Obama recently said that, from time to time it may require taking a step backward before we can truly move forward together.

What were the most memorable meals you’ve had on Top Chef like?
Something as simple as a beautiful soufflé or a perfectly crisp and flaky pie with apples and cinnamon bubbling underneath will win our attention for its simplicity and exacting execution. Because we all know these dishes, there’s nowhere for the chef to hide and so those are the ones that are the most memorable and stick with you.

What is the reason that you didn’t pursue acting in many movies? Are there any plans to take up films in future?
For many years as I was transitioning out of modeling. I was actively pursuing film and TV roles because I had studied theatre and it was always my intended destination. Then a decade ago I was offered the job on Top Chef and while I didn’t think at the time that I would be completely changing careers I did feel it was a golden opportunity to make a profession out of what was already a  lifelong keen interest and passion of mine.

As a super model, a cookbook writer and television host, which role would you say has the strongest side of yours?
I think there’s more of me in my books than anywhere else. Fashion and television are collaborative efforts and incredibly creative as well. But with writing you have total control and the voice and sensibility is for better or worse only your own.