The ustad of stirring and soulful melodies

Our music is for introspection, not to play to the gallery: Ustad Ashish Khan 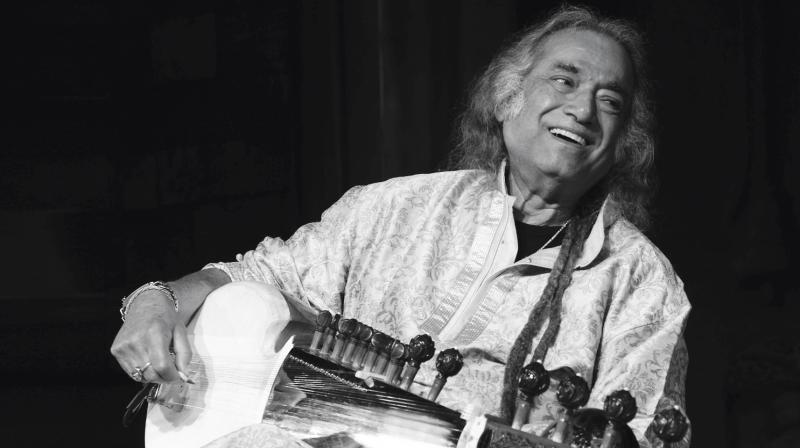 US-based Ustad Ashish Khan has an unbelievable pedigree — He is the grandson and disciple of the legendary Ustad Allaudin Khan (founder of the Maihar Senia gharana (musical tradition), the son of Ustad Ali Akbar Khan (called the greatest musician in the world by Yehudi Menuhin) and the nephew of the inimitable Pt Ravi Shankar. He is today the senior-most sarod player in the world, has received Grammy nominations, and also has to his credit the hit fusion band Shanti which he founded as early as 1969, and which started the trend for ‘east west’ fusion music. He is a strange musical mix of rigid tradition on one hand, and openness to new music on the other.

He opened up on a variety of subjects. Some excerpts from a talk:

Khan sahib, please tell us about your early life:
I was born in Maihar (in the state of Madhya Pradesh) where my grandparents lived. I lived with them till I was 17, and learnt from Baba (Ustad Allaudin Khan) and my bua (Guru Ma Annapurna Devi). It started with me learning sarod, then vocal music — this is how it is in our tradition. My grandfather also taught me the tabla.

Later I joined my parents in Calcutta, and learnt from my father (Ustad Ali Akbar Khan) along with Nikhil Bannerji. I then started travelling and touring with my father, Ustad Ali Akbar Khan, from the early 1960s onwards. My first foreign trip was to Japan.

You now live in the US?
I have lived in the US since 1968, and currently teach at the California Institute of the Arts Valencia, Los Angeles, set up by Walt Disney. Amongst the students I teach Indian classical music to John Stevens and Will Marsh, who are promising (they play the sitar). Also, there are two Chinese girls who are talented; one learns the sitar, the other the sarod. In India also I have several promising students in Calcutta.

What did the US give you?
Well, firstly I was exposed to world music which greatly enriched me. I got to learn about classical guitar — rock and roll, jazz, flamenco, they have so many styles. I was very fortunate I was able to meet the legendary Andres Segovia and in fact even got his autograph! I also got to meet Bola Sete, the Brazilian guitar maestro, who used to pluck the strings, and not strike them. That really blew my mind. I also heard a lot of classical music, I met Zubin Mehta, who was very keen to collaborate with me musically but I was not mature enough musically then.

I remember meeting the talented Joan Baez, a very nice lady; one time we shared a concert stage in Hollywood. She sang earlier, and we closed the show.

Our group Shanti whose music contemporaries were Santana and Chicago was very successful. We used to be heard all over the US, and toured all over. One of our tunes became the signature tune of Voice of America! Sadly, the group broke up as Zakir (Ustad Zakir Hussain) started another group with John Mclaughlin and others, called Shakti, which had a strong percussion element. It became very popular.

Sadly, we had no financial backing. But now I believe they have re released some tracks of Shanti in CD form.

You have always retained your links with India; what do you find good and bad in India:
I love India and want to spend more time here. I have some very good disciples here. The pace of life here is better, my family is here. But my work commitments in the US keep me there.

I don’t like the politics in the world of music here. Also I don’t like the fact that some musicians who are unknown in India go to the US and spoil the market there — they play for tiny amounts there!

I find many changes in the music scene here. For instance, more and more vocalists prefer accompaniment by the harmonium; that’s not a good trend. It should be the sarangi.

Shruti (microtones) use in our music is also becoming defunct. That’s again not good; it’s a unique aspect of our music.

Our music is for introspection, not to play to the gallery. One must play for oneself not for the audience.

Another thing is, in the drut (fast) speed, musicians nowadays go so fast they can’t play the gat! It’s just strumming along. There are rules of speed too!

You have played quite a few jugalbandis in your younger days. Tell us about that:
Yes, I have played once or twice with Nikhil Bannerji, Hariji, (Pt Hari Prasad Chaurasia) Ronu Mazumdar — I like his flute a lot. Indranil Bhattacharya, the sitar player — people used to say our duets were quite good, the best after my father and Panditji (Pt Ravi Shankar). Also with Sultan Khan (sarangi). I have played with Shujaat (Ustad Shujaat Khan), once or twice I think, in India and in the US, when we were both quite young. That again could have been a good jugalbandi, for both of us, as both our fathers (Ustad Ali Akbar Khan and Ustad Vilayat Khan) played well together. But I didn’t like him singing during the duet!

I think the sarod lends itself to being combined with many instruments — jugalbandis can create very fine music. But the spirit should be complementary not competitive.

Also, some artistes charge too much for jugalbandis; so organisers get put off.

Maybe they get scared at the thought of being judged on stage with a peer!

Khan sahib tell us about your personal life:
My personal life is a kind of tragedy — I have one son and one daughter but they live with my wife. She betrayed me in a way, because they were very young, my son was perhaps 10 or 11 at the time she divorced me — it’s a long story.

Unfortunately they are not musicians, I feel very unhappy that I have not been able to teach my own son, but my nephew Shiraz is like my second son and I am teaching him. (Shiraz Ali is his brother, late Ustad Dhyanesh Khan’s son). Though he started playing very late, he is working really hard.

He is playing my grandfather’s sarod, as he too is left handed and that is wonderful.

How do you unwind after a long day’s work:
I watch TV. I also watch films. I enjoy cooking, it helps me relax (his disciple Atish interjects ‘Guruji is really a good cook’). I love Thai, Chinese, Mexican of course Indian. And also hamburgers — stuff like that too! I hear music to relax when I am driving, I listen mostly to jazz, western classical music and ghazals.

Khan sahib, what new things are you working on now?
Well amazingly I had worked with a very talented group of artists, a long time back, in 1975, and we were planning to release the music we had worked on. I had given the music to Capital Records to release. But it never happened!

Now I am planning to see what I can do with it; it’s still quite relevant and refreshing. I was way ahead of my time,. In addition I am also working on another project — I have some recordings I did with artists from New Orleans, the Mecca of jazz. Tim Green, a wonderful sax player, played the ragas I explained to him, and I recorded him. He has passed away now, but I have the recordings, and plan to add to them.

So when do you return to India?
I’ll be back in June!