Every now and then, a musician of such outstanding ability and influence is born that his music is a force to contend with for decades. 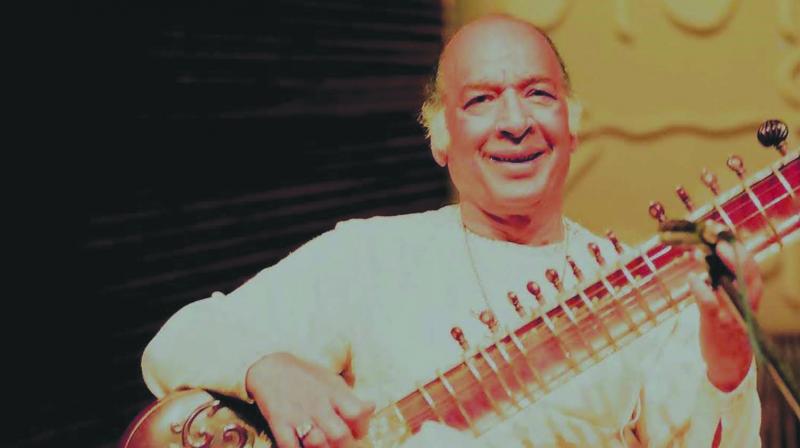 Every now and then, a musician of such outstanding ability and influence is born that his music is a force to contend with for decades. Such a musician was Ustad Vilayat Khan, who was born on August 28th. The bar he set, as a yardstick for sitar playing, has still not been touched; his records are avidly heard and dissected even today by a new generation of sitariyas who have never heard him perform, and who may even have been born after his death in 2004.

Ustad Vilayat Khan was not even in his teens when his father, the iconic Ustad Inayet Khan died. He had to find his way musically at a time when the patronage of the Princely courts had ended (a touching story is how the late Kr Birendra Kishore Roy Chaudhury from the erstwhile state of Gauripur insisted on giving the Ustad a token retainer, in memory of his father Ustad Inayet Khan being the court musician in Gauripur. Even years later, after he had established himself, the aristocrat would joke “Mian, (Ustad Vilayat Khan’s nickname for his family was “Mian”) apne paan ke liye rakh lo” (keep this to pay for your “paans”)”. Times were hard, and Ustad Vilayat Khan saw bad times. It was during these years that his senior most disciple outside his family, Padma Bhushan, Sangeet Natak Academy Fellow Pt Arvind Parikh was such a support; being close to the Ustad in age, their friendship was a bond that transcended the bond of music.

Ustad Vilayat Khan achieved a mastery over his instrument that remains unmatched; his vision of beauty transcended Raga limitations. A touching tribute was paid by someone who never actually learnt from Ustad Vilayat Khan, but today is one of the finest instrumentalists, and senior most sitariyas keeping his style of music alive — Pt Budhaditya Mukherji. In his words “In my limited understanding, Ustad Vilayat Khan’s musical concepts reached the status of immortality long before his physical demise. As I am not a great orator, I have tried to pay my sincere and deepest respects in my own small way to the immortal concepts of that unparalleled essence created on the sitar, through my sitar wadan.”

His second son, US based sitariya Hidayat Hussain Khan, who lived with him all his life, speaks nostalgically about his “abba”. In his words “Abba was definitely one of the most interesting people out there. Anyone who knew him would vouch for that. Obviously I have many many amazing memories with him. Starting from back yard barbeque cookouts in America to teaching me how to ride a bike in Dehradun. Being yelled at for coming home late from a party and next morning having a conversation about having fun with friends and partying. He knew it all because he did it all. He could be an extremely difficult person and at the very same time be completely understanding and insync with your needs. I want to share a very special memory –it’s  related to creativity and music. This is going back to Dehradun days. I was maybe 12 or 13ish. He had taught me a bunch of “taans” and “paltas” and told me to practice them. So  for the next few days I kept at it like I was told. I was pretty proud of myself for being able to play them all very well. One day while I was practicing Abba walks in and says “beta, music is about creativity... the “taans” and “paltas” I gave you were not only to just repeat; they are ideas for you to run with. Always try to find more with what you have. Creativity should flow naturally in music and it only happens when one sees things as ideas, and not just as fixed pieces”.

Hidayat confirmed that the most important lesson he learnt from his great father was the most logical and simple one – “to Listen. Listen to the world and everyone in it only then will you know what to give.” Certainly Ustad Vilayat Khan’s ability to listen and absorb was phenomenal; apparently he once heard Raga Asa from a Punjabi friend, internalized it, made it his own, and a few months later played it, adding it to Raga Bhairav; Raga Asa Bhairav.

Hidayat recalled “This is his 90th birth year. I miss him more now than ever before. ”

Ustad Vilayat Khan had a towering personality, though physically being a small slight man; he is fondly remembered by people wherever he ever lived – Calcutta, Delhi, Bombay, Simla Dehradun, US. With a wonderful sense of humour, a fantastic mimic, enormous good fun to be with, the Ustad loved life and lived it to the fullest. Always elegantly attired, he loved shawls and had an enviable collection. He married twice, and had two sons and two daughters; his elder daughter Yaman sadly passed away recently.

Hidayat Hussain Khan shared “We have loads of amazing plans to remember Abba by. August 25th and Sept 8th we are presenting concerts in his memory in New York and Princeton NJ. Also there is a book written by a dear friend and an amazing author Namita Devidayal on Ustad Vilayat Khan, releasing on November 28th, in Bombay.” Sadly, in India there are no significant musical tributes being paid to this great musician on his 14th death anniversary.

The author writes on music, musicians and matters of music