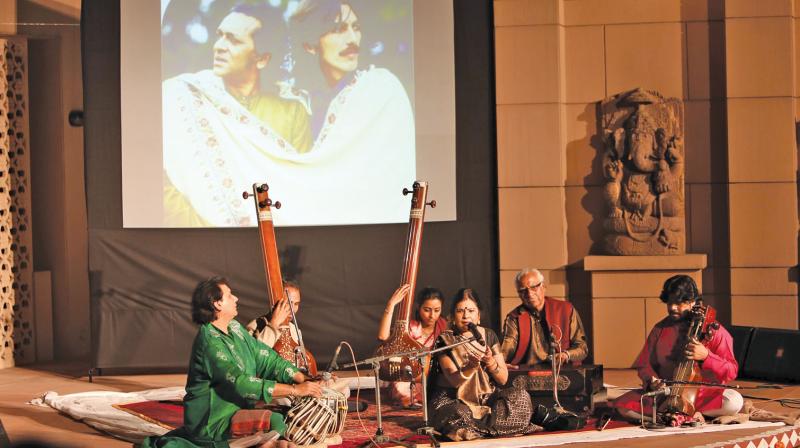 Musicians perform at the three-day RIPMA festival in celebration of the 97th birth anniversary of its founder Pt Ravi Shankar. (Photo: Anshuman Pandey )

Pt Ravi Shankar, the best-known Indian musician the world has seen, had opened the Ravi Shankar Centre of the Ravi Shankar Institute of Performing Arts in 2001. It was set up as his dream project to teach students in the old gurukul parampara “to try and duplicate the way he had learnt, where students would live on campus,” says his biographer Oliver Craske (his book on Pt Ravi Shankar should be completed this year). The Delhi centre replaced a similar experiment he had set up in Benaras around 1974, which was active for about 15 years, but which failed eventually, said Craske. The maestro’s wife Sukanya Shankar said somewhat bitterly, “We couldn’t cope with the goonda culture there.”  Sukanya said the Centre was built around Pt Ravi Shankar, who was the focal point. He used to record a lot in the studio and teach his students.

Sadly the Delhi Centre too did not really take off in the way planned. The students taught by Panditji were able to interact with him for only about four months of the year when he was in residence, from about November to March. His death in 2012 further marred things. Today, the Centre with its own recording studio, two concert stages – one indoors and one outdoors, remains largely quiet except over the weekend when students come to be taught by two of Panditji’s lesser known disciples, Pt Barun Kumar Pal and Parimal Sadaphal. Sukanya, or “Chinamma” (little mother) as she is affectionately known, is excited about what can be done about the Centre, though she is still working out the logistics. A grant given by the Grammy Academy is being usefully used to digitise the enormous music archives, as well as scan the huge photographic memories left by Pt Ravi Shankar. The archives will soon be made available to listeners though the logistics of the process are still being worked out.

Sukanya, a visibly intelligent, lively presence with a ready unaffected laugh, is easy to chat to – “For me, he (Panditji) was a God”. On being asked about her persona in the music world today — she responded in a lighter vein, with a laugh, “Yes, I was getting a bit worried about the “Chinamma” tag, after the recent happenings in Madras.” Her immensely humane outlook is revealed by her caring for her little dog Suki, who Panditji loved so much too — as she doesn’t like Suki to travel alone, in the cargo hold, she will fly from Delhi to Munich, (Lufthansa allows pets in the cabin) Munich to Paris by car, and onwards again from Paris to London, her ultimate destination! “An eight-hour journey will take about 23 hours, but I can’t leave Suki alone” she said.

Speaking about the annual RIMPA festival, which opened on February 16 with its unusual line-up of artists, Sukanya said, “It was never our aim to project Panditji or his many many disciples — the artistes are selected on talent only. No matter whose disciples they are. I don’t believe in starting a festival and then playing in it yourself. Many young unrecognised artistes have been given this platform and their careers have taken off after being launched here. It was the same even when Panditji was there. Neither he nor Anoushka have ever performed here!”

The artist line-up on the first day featured Supriya Shah on sitar, followed by a jugalbandi with her and husband Sanjeev Shankar on the shehnai. The main attraction of the evening was a concert by Padmashri Malini Awasthi, known for her equal command of all genres of thumri as well as authentic folk music of the UP. Her powerful voice, combined with the wonderful accompaniment by Pt Dharamnath Mishra on harmonium, (incidentally, he is her guru Girija Devi’s guru bhai) as well as her traditional old compositions, were indeed enjoyable. The audience was spell bound by her thumri, chaitis, holi and finally a wonderfully descriptive folk song of Awadh on the birth ceremony of Sri Ramchandra. His “dai” (mid wife) is upset so all three queens and finally King Dasrath himself try to placate her; Malini Awasthi said if only present day rulers were so caring of the feelings of their people! Here on the birth of a prince, the entire royal family was preoccupied ensuring the mid wife was happy!

Arushi Mudgal with her presentation of Odissi dance was followed by a percussion solo by Bickram Ghosh. For the last twenty-five years of his life, Bickram, followed later by Tanmoy Bose, travelled all over with Pt Ravi Shankar so his inclusion at the festival was specially relevant.

The third day featured a vocal recital by Indrani Mukherjee of Kolkata followed by a kathak display by three London based dancers from the Sujata Bannerjee dance company. The concluding day featured Bharatanatyam by Dakshina Vaidyanathan Baghel and sitar recital by Arun Bharatram, one of Pt Ravi Shankar’s oldest disciples.