Tuning in with the legend

Cuban-American musician Arturo Sandoval, who will be performing in India for the first time, chats about his musical journey. 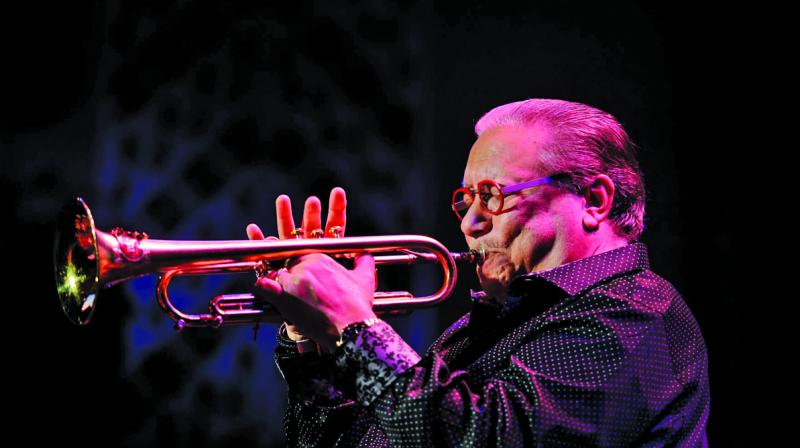 Being in the business of music for over four decades, Arturo notes that he has evolved with music and is still learning every day.

Nearly four decades ago, aspiring teen jazz musician Arturo Sandoval was put into obligatory military service for three years, followed by three months of jail in Cuba. The only crime he committed was to listening to jazz music played on an American-owned short wave radio programme. But now, with a dramatic defection story of his own, the musician stands tall, literally and metaphorically, with nine Grammy and one Emmy awards to his name. His story has been inspirational to many — in 2013, Arturo was also honoured with the Presidential Medal of Freedom for his contribution to music by then US president Barack Obama. His story was also the subject of the 2000 film For Love or Country: The Arturo Sandoval Story, starring Andy Garcia.

“I was told that I was listening to the voice of enemy. It was and still is a very sad situation in Cuba and many parts of the world, where extremists suppress artistic freedom,” recalls Arturo, who will be performing in India for the first time at the three-day NCPA ADD Art festival to mark 50 years of the institution. “Personal and artistic freedom is everything, without that we have nothing as artists,” he asserts.

Since beginning, the musician has been determined to take his musical instincts forward, and has earned some great musical collaborations on the way with legends and contemporaries like Frank Sinatra, Johnny Mathis, Justin Timberlake and Alicia Keys. However, he cherishes his musical partnership with American bandleader Dizzy Gillespie the most. “I would say he was my biggest influence, mentor and hero. He changed my life and I still cherish my collaboration with him,” expresses the musician.

Revered as one of the most multifaceted musicians of our time, Arturo has mastered the art of playing trumpet and flugelhorn, and has been playing the cornet since he was five years old. Arturo is equally dynamic on piano, timbales, keyboard and vocals. “I used to play with little bongos then my great-aunt found a small cornet and I just couldn’t stop,” recalls the musician, adding that he didn’t pick music but music chose him. “And I am happily obliged.”

Being in the business of music for over four decades, Arturo notes that he has evolved with music and is still learning every day. “I think it is very important as a musician to always be open to growing and learning. I want to keep evolving,” he says, adding that his nervousness is one of the biggest things to have shifted. While he used to feel nervous before performances in his younger days, “That has changed; I don’t really feel nervous anymore. It’s more like being excited and ready to have fun on the stage,” he gushes.

The musician also finds that jazz music too has evolved in many ways. “I am okay with it because change is good for growth. New ideas are shaking things and giving musicians new and different perspectives,” he opines. The musician further adds that jazz is a special art form that is accepted everywhere. “There is something for everyone with jazz, and I think if you give it a chance then you find yourself soaked in it,” he explains.

With discipline, determination, and consistency, Arturo makes sure to push himself to learn new things. “I practice every day to keep my chops working, no matter what,” he says. When asked about the secret behind achieving all the accolades, he laughs saying, “Oh my goodness. I don’t know the secret, but hard work and perseverance in all the circumstances help.”

Speaking about his show in India, the musician shares that he is excited to perform here for the first time. “My set will consist of a lot of different things,” he reveals, adding that he will be playing trumpet, keyboard, timbales and piano with local musicians for the first time. “Maybe that opens the door to other opportunities to collaborate with Indian musicians. I am open to that,” he says in conclusion.