Music with a message 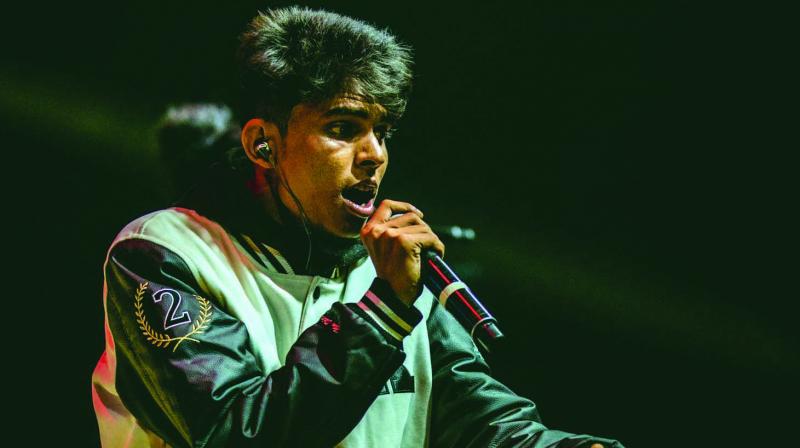 “We are not just a band, but a movement. We make music to change negative things around us and in ourselves as humans. We write and compose about things that need people’s attention,” says Aklesh Sutar aka MC Mawali, who took up this identity in 2013 and made the track Laaj Watte Kai (Are You Ashamed) as a protest about the Delhi gang-rape case. “Just like other people in the country, we also were very disturbed. We decided to use our interest in music to raise voices, and hip hop was the best way to do that,” Aklesh explains.

Apart from MC Mawali, the team comprises three more rappers Dharmesh Parmar (MC Todfod), Yash Mahida (Maharya) and Saurabh Abhyankar (100RBH), along with an army of crew members including graffiti artist Robston Soares (lobster), beat producers Tushar Adhav (DJ Bamboy), Abhishek Shindolkar (raakshas), music producer Abhishek Menon (NAAR), and sound engineer Joshua Fernandes. “We all were friends and never thought of forming a band. But, we had the same interest in hip-hop music, so would get together, hang out and discuss the music we liked. But over time we realised that we all have the same kind of music and we believe in the same thought.  That’s what Swadesi stands for,” Dharmesh recalls.

With stylised rhythmic music coupled with rhyming and poetic speech, the group composes music in most regional languages. Which according to them makes them stand out. “We are a multilingual rap crew and we rap in regional languages. We write revolutionary songs in a familiar language, so every generation connects with our music,” says Yash, to which Aklesh adds that their music doesn’t have commercial inputs. “Our music is not seen on TV because we make music for people. For us, everyone is Swadesi if he is representing his roots,” he opines.

When asked about the key to maintain camaraderie among the group Dharmesh says that the goal to make sensitive music connects them all. “We don’t have any written rules to maintain camaraderie among us, but we respect each other’s ideas. Our ambition is very clear and we share the same mentality. Only when we all agree with something we proceed. Or else it doesn’t happen, no matter what we lose,” he says. And remedy to solve differences? To which Yash quips. “Whoever fights goes on track with the other person, and when they are alone they have to sort things out themselves.”

Aklesh adds that they all have mutual respect for each other. “We know our weaknesses and strengths and don’t try to take advantage of it. We use our energy to make music,” he reveals.

Although Swadesi is only six-years-old, its popularity across the country is increasing rapidly. Not just millennials, but the older generation too enjoy their underground hip-hop and rap music. “I travelled to Srinagar recently and heard people singing our song. We make songs in people’s languages, and the theme is also relevant so it is spreading fast and people like it,” says Dharmesh in conclusion.