With Qutab Minar in the backdrop, the evening with ghazals made the city forget its rapid urban life. 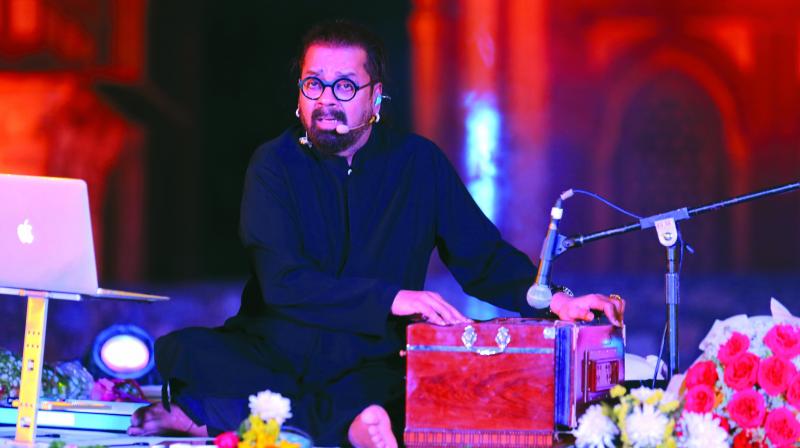 The evening extravaganza began with Ganesh Vandana staged by Nizam Bhai Premi, followed by raag Bageshri and Kedar by Fareed Hasan and Mehboob Hussain symbolising the convergence of cultures and spirituality.

Music washes away the dust of everyday life from our souls. There is no denial to the fact that what dominates any human society is its culture. To celebrate eternal Indian culture, Bazm-e–Khas an initiative of VP Gupta presented an evening of sublime poetry, traditional music and ghazals titled Sur Adhar Music Festival 2019. An initiative to preserve the eroding classical culture, the festival featured well known artists like Hariharan, Nizam Bhai Premi, Fareed Hasan and Mehboob Hussain accompanied by Akhlat Warsi, Mithilesh Jha, Murad Ali, Peromita Mukherji, Shadab Bhartiya, Atul Raninga,  Sushant Sharma, Yusuf Khan Azhar Shakeel and Zia Khan. These eclectic musicians took us through the journey of Indian heritage steeped in love through their classical music at the mesmerising courtyard of Qutub Minar, New Delhi. Hariharan needs no introduction for those familiar with ghazal style of singing. His mesmerising voice stirs emotions in the listener’s soul.

The evening extravaganza began with Ganesh Vandana staged by Nizam Bhai Premi, followed by raag Bageshri and Kedar by Fareed Hasan and Mehboob Hussain symbolising the convergence of cultures and spirituality. The highlight of the evening was Hariharan with his authentic style, performed various ghazals and thumris along with his few bollywood superhits. The heart’s of the brimming audience at Qutub Minar compound were bound to be captured by Hariharan’s enchanting folk tunes, mesmerising lyrics and captivating performance.

Legendary singer Hariharan said, “I was really excited to perform at Qutub Minar. I remember the last time I performed here was for Qutub Minar Festival a long time ago. Definitely it was an overwhelming experience with such a wonderful ambience. For me Bazm-e-Khas is doing a great job towards promoting our Indian classical music which is really very appreciable and I am glad to be a part of this.”

Bazm-e-Khas is a not for profit organisation constantly striving to bridge the socio-cultural difference between Indian youth and Indian classical music. The shows are open for public to attract the maximum number of people especially the younger generation to promote traditional Indian music.

Fareed Hassan and Mehboob Hussain felt fortunate to share stage with legendary singer Hariharan. “It was an honour for us to be a part of this show. We are really thankful to Bazm-e-Khas for giving us this grand opportunity,” they said.

In the light of the event Shri VP Gupta, founder of Bazm-e-Khas said, “ Bazm-e-Khas is a very special platform that promotes young and not so young artistes to meet and exchange ideas along with entertaining good listeners. Our aim to organise this evening with the richness of Indian culture and create awareness among the youth who are mostly impacted by western culture.”