The sound of silence

The dimension of sound is often neglected in theatre. 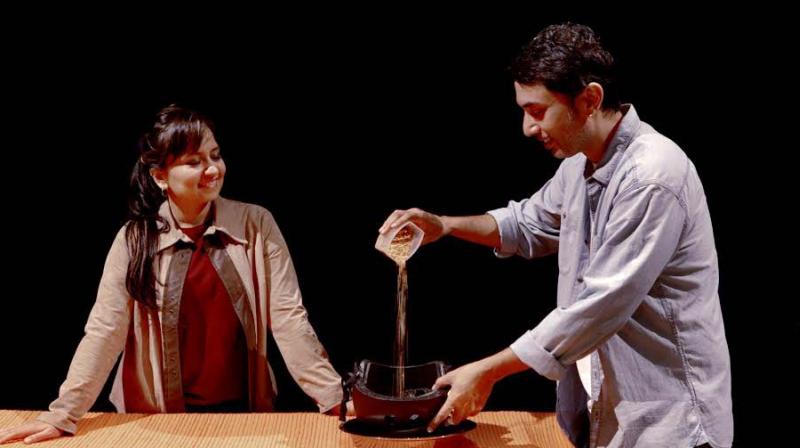 A scene from Wildtrack

Sound design in theatre is a much ignored field. In cinema the sound design is often the cornerstone of a film, particularly in horror flicks or Christopher Nolan movies. But in theatre, it is usually relegated to the background (pun intended) where it’s role is merely to underscore of scenes with music, or ‘effects’ that ask us to believe off stage action.

In shows that have live music on stage, sound design has a more interactive relationship. In Naatak Company’s Chakra the effects were delicate, and the musicians pit was an eyesore of microphones needed to capture each effect.

Recent Lihaaf also has an interesting sound design, where the musician ‘foley-ed’ the action, providing the necessary clattering of dishes that the narrative demanded.

Yet a holistic, non-musician like underscoring is rare. I did come across two such examples recently. Strangely both play dealt with dementia. The narratives revolved around the primary character coming to terms with failing mind.

Therefore it was no wonder that ‘sound’ had a major role to play. Each scene was set in a different location: one house, an abandoned apartment, at the beach, a garden, etc. And therefore each room or space had its own room ‘tone’. Therefore very subtly and imperceptibly we were moved from location to location in our minds, even though visually there was no change in the stage picture. In fact so delicate was the soundscape that you don’t realise the room tone until it was actually switched off.

That sense of revelation and surprise for the audience was almost palpable. In Motley’s The Father, there was a far more intrusive sound design. The production had no specific props or details, but there is a sound effect for everything; like water gushing from the non-existent tap, or mimed doors opening and closing. The synchronisation of the actors had to be spot on, and it was. When the play began, I groaned a little. I am not usually a fan of sound effects over a PA system. Yet ten minutes in, I was hooked. Sahil
Vaid’s soundscape began to become the way we see things. We followed what was happening based on whether we heard it or not. It became an ‘audio’ reality. This struck me most in the blackouts. While we saw the shadowy figures of stage hands carrying something, yet each time a scene opened and a piece of furniture was added or subtracted it surprised us. It was almost as though if we didn’t hear it, we didn’t see it.

The dimension of sound is often neglected in theatre. Maybe it’s because of substandard equipment in most places, or the extensive technical time required to balance something perfectly, that people have been reluctant from truly embracing this area of our senses. But as theatre becomes a more 306 degree experience, I do believe this aspect of performance will be the next frontier for intriguing, exciting and breakthrough work. For just like in Wildtrack, only if there is sound, will silence truly work and be more powerful.