Music with a comic twist

Aleksey Iguesman and Hyung-ki Joo, who will be performing at NCPA, reveal the secret behind the inspired absurdness of their performances. 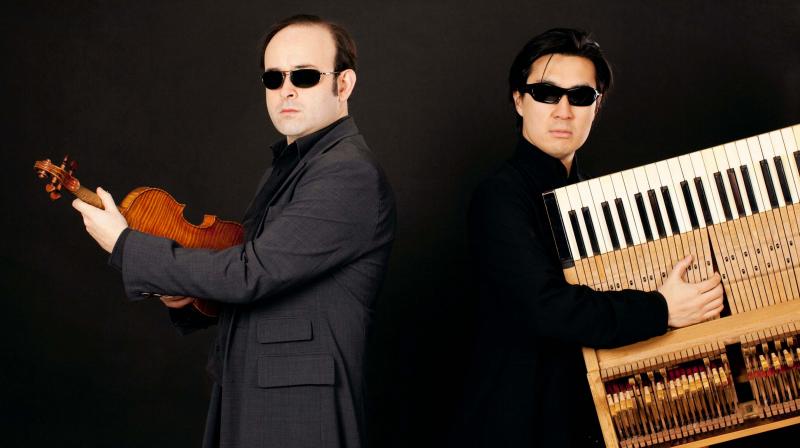 Fifteen years ago, Russian-German violinist Aleksey Igudesman came to India to learn Indian classical music in Varanasi. The young musician in his thirties fell in love with the country so much that he couldn’t wait to come back to India and perform for its audiences. With NCPA celebrating 50 years of its existence, Igudesman and his British-Korean pianist co-performer Hyung-ki Joo will be performing in the three-day multi-genre NCPA ADD Art festival, scheduled to take place from November 29 to December 1.

“Performing in Mumbai will be a different world. I fell in love with this country when I came here for the first time. I can’t wait to perform our tailor-made piece with many great surprises,” says Igudesman, who, along with Joo, are revered for their show ‘A Little Nightmare Music’. They are also touted to be the first comedy-musical duo in the music world. While most of the music concerts are inspired by harmonious symphonies and music, Igudesman & Joo, (as they are popularly known) are inspired by things that go wrong during a concert.

“Often mistakes are more interesting than what was planned. In our show we make mistakes because we are human and not cyber genetically cloned replicas,” says Joo, who believes mistakes often work better than what we intend. Peppering contradictions in their style, the duo explains their performances as, “Monty Python meets Mozart, or South Park meets Bach.”

Despite being serious classical musicians, they started making fun of the business and ceremonies surrounding classical music, which eventually create fun in their performances. “But humour is secondary as the music comes first,” says Igudesman. When asked about how they infuse comedy into music, Joo explains that it emerged out of a need to have more young people at classical music concerts. “We both felt that the world of classical music was taking itself very seriously. Going to a concert often resembled a funeral rather than being a celebration of life,” Joo laughs, to which Igudesman adds: “Any parent or kid who might be apprehensive of attending classical music events will never be scared again after coming to one of our shows.”

Having a fan following across age groups, the duo believes that it is not necessary to understand classical music to enjoy it. “Our typical audience and fans range from kids to their grandparents, including regular concert-goers as well as people who have never been to a concert hall in their lives,” Igudesman shares. In all of their shows, Igudesman & Joo make sure to write shows that are enjoyable for every audience. “For us, music is for everyone. Even if you haven’t heard Mozart, you will enjoy what we perform,” Joo assures.

Although it is only recently that the duo is wooing young music lovers online, their collaboration goes back to their school days in England when they were just 13. Apart from working together, the two often spend time relaxing and discussing music together. “We spend so much time together that some people don’t realise we need our personal space to ourselves sometimes,” says Joo. When asked how they resolve creative differences,, the violinist laughs and says, “We mostly fight on stage as part of our shows, so we don’t have to do it in our private life.”

With more than 45 million people showering them with love online, the duo owe their success to social media and is thankful to the digital revolution. “We owe much of our success to online media. We were not on the general public’s radar, but since our first clip went viral, we have been able to travel across the world,” gushes the pianist, who loves to stay close to his fans and tries his best to reply as many comments and questions as possible. “As long as they don’t expect a straight answer, everyone is satisfied,” he shares in conclusion.