Jazz by the bay 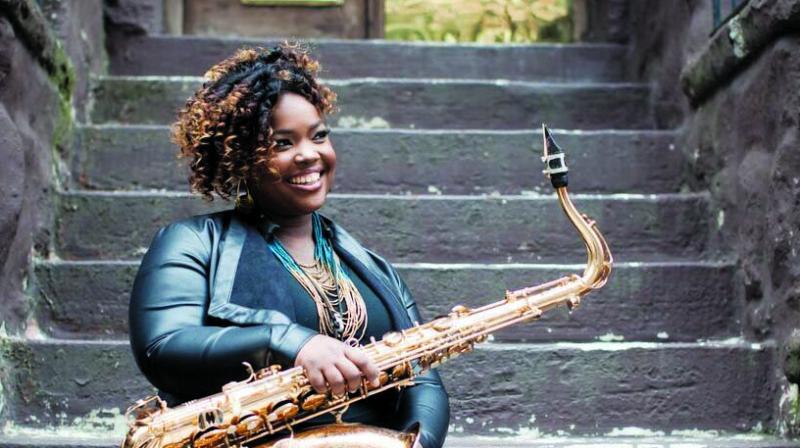 One year ago, when New York-based jazz musician Camille Thurman made a bucket list of the places she wants to perform and travel, she didn’t think that she would cross India off that list so soon.

The musician was in Mumbai to perform at the third edition of The NCPA International Jazz Festival, where the audience was entertained and enthralled in equal measure.

She and the rest of the band — pianist Keith Brown, bassist Devin Starks, and drummer Darrell Green of Darrell Green Trio — began the evening with some new arrangements from her new project, featuring the music of legendary pianist Horace Silver, followed by some original compositions and some classics from her latest album Waiting For the Sunrise. Camille and the Darrell Green Trio together have been performing across the world for more than seven years, and according to the singer, they share an inseparable musical bond. “I can take chances, trust, and know that they always have my back musically. We understand each other, oftentimes without having to speak or explain the things we’re trying to play and work out. We have respect for each other,” says the vocalist. With a strong understanding and collaborative efforts, the team of four maintains a great camaraderie among themselves. “If there is ever a difference, we talk through it and work it out. Music, arrangements, concepts everything is collaborative,” she adds.

Unlike other jazz musicians, who choose one thing and sharpen it as much as humanly possible, Camille has mastered both the saxophone and singing. The 32-year-old’s strings got attached to music when she was four years old, all courtesy of her mother. “My mother introduced me to jazz at a very early age. I grew up in a historic neighbourhood where some of the great jazz musicians once lived. She taught me the history and exposed me to the music,” she reveals. Growing up, she played the violin, followed by the flute, the alto saxophone at the age of 13, and finally tenor when she was 14. “It’s an amazing feeling. I’m blessed to be a part of this great music and legacy. It is a blessing to be able to travel and share music with people from all over the world,” Camille says.

Although, she confesses that she switched to tenor — a singing voice between baritone and alto or countertenor — reluctantly, and never wanted to play, “because I thought my peers would make fun of me.

And also I didn’t see any ladies playing the tenor saxophone,” she laughs and recalls the first time she enjoyed playing after listening to a record by the great tenor saxophonist Dexter Gordon. “It changed my life. I knew from that moment onward that I wanted to play Jazz,” she reminisces.

When asked if it was difficult to break the stereotype of being a woman tenor player, she reveals that she too had her share of brickbats. “When I was in grade school, some of the guys were very unkind. They told some of us ladies that we were terrible at playing and didn’t belong in the band. That was a challenge, especially when you are trying to learn. I felt like I couldn’t ever make a mistake,” recounts the musician, and adds that she did not have confidence in her ability until she went to college and met saxophonists Tia Fuller and Mike Carbone. “They encouraged me and told me that I could make a career as a saxophonist. They gave me the confidence and skills that I needed to be a great musician,” she gushes proudly.

Talking about jazz’s primarily western traditions now getting fused with other musical forms from across the world, Camille notes that jazz is also a foundation of all modern music harmonically and rhythmically. “Without jazz, there wouldn’t be rock, soul, or any kind of music. Jazz gives you the rhythmic and harmonic versatility and knowledge to freely cross into any genre and play with understanding,” she explains and adds that she would like to collaborate with Indian musicians. “I would love to learn from Indian musicians and study the music,” concludes Camille, a unique interpreter of the jazz tradition.