Amazingly, both sessions are starting with eminent Carnatic artists from the same illustrious family. 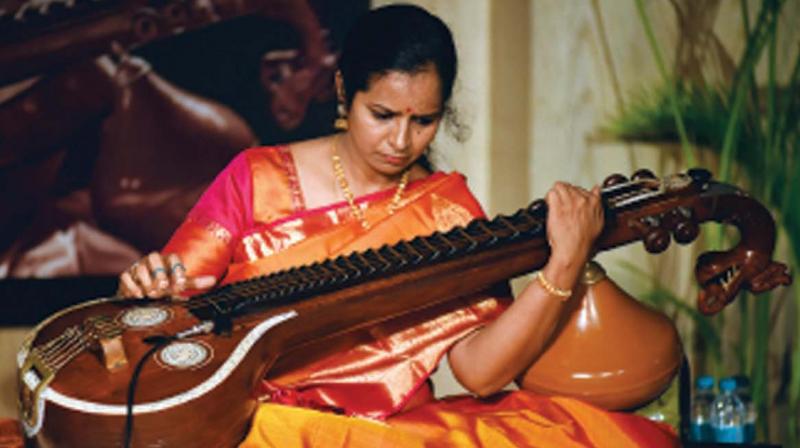 The tradition of overnight classical music concerts has never really taken off in North India; a notable exception being  the annual Harivallabh Festival in Jalandhar in the last week of December, which has been held for 142 years, making it the oldest classical music festival in North India. All night music concerts are very common in Kolkata, Banaras, in earlier years, even in Allahabad. The rationale  of having music all night has a peculiarly North Indian context, where the Time Theory of Ragas is still adhered to; to hear ragas of the late night pre dawn and dawn, one has to listen to music all through the night.

Surprisingly, two Government-funded agencies are holding separate all night music concerts over the next weekend — in Jaipur the very active Jawahar Kala Kendra is holding its third annual All Night Music session on 17th November; in Delhi the equally visible Indira Gandhi National Centre for the Arts (IGNCA) has the second edition of their All Nighter on 19th November.

Amazingly both sessions are starting with eminent Carnatic artists from the same family — Jaipur will feature Saraswati Veena virtuoso Vidushi Jayanthi Kumaresh; whilst in Delhi, Jayanthi’s nephew (he is her sister’s son) popular vocalist Abhishek Raghuram will open the festival. For Jayanthi, it’s her first concert in Jaipur and she said she “was excited at the prospect of introducing India’s national instrument, the veena to Jaipur audiences”. Abhishek was equally upbeat about the concert; despite the tight squeeze for him (he has a concert in Chennai on the 18th, and another one on the 22nd).

Urvashi, a young fan from Jaipur said it was logistically easier for her to hear music all night rather than go home to her hostel late at night. She was excited about hearing Live Carnatic music for the first time, and shared that Jayanthi Kumaresh’s stage presence which she had seen on videos was as attractive as her music!

IMPRESSIVE LINEUP
IGNCA’s lineup was equally impressive, and equally varied in content, but featured six artists. Abhishek Raghuram, Carnatic vocalist, will be followed, coincidentally again by Ayaan Ali Khan on sarod. Vidushi Arti Ankalikar Tikekar representing the Jaipur Attrauli gharana gayaki will be next, followed by “Taal Yogi Pt. Suresh Talwalkar and his band of six accompanyists including four percussionists (tabla, African instrument “djembe”, pakhawaj and Peruvian instrument “cajon”) in a concert entitled “Taal Kirtan”. This will be presented as a seven member act in Delhi for the first time.

Pt. Suresh Talwalkar explained the novel element of his act — “in Taal vadya kucheris, all the percussionists follow the same theme, so to speak, and the style of engagement is through “sawaal jawab”. In my taal kirtan, we are all engaged in “kirtan” which actually translates to jointly describing an idea. That is what we do together; five of us taking up the theme and embellishing it in different ways; the time keeper for us all is the refrain of the vocalist. So we create freely, in “layas” not usually played in percussion solos or kucheris, like ara chautaal, dhammar.”

The next item will be the ever popular Maihar gharana Mumbai based sitarist Purbayan Chatterji. He revels in unusual collaborations, (his duets with vocalist Kaushiki Chakraborty and flautist Shashank Subramanyam amongst others have been making waves internationally), fusion, and additionally plays his version of an electronic sitar. Despite this, Purbayan verbalized his excitement in playing “a classical solo”, as he termed it. Concluding the festival appropriately will be Delhi gharana’s Khalifa, Ustad Iqbal Ahmed Khan whose family trace their musical lineage from Amir Khusrau.

Dr. Achal Pandya of IGNCA opined that the Delhi audience for classical music, comparatively speaking, was jaded. He said that IGNCA tried to present the finest artists of the country, completely free of cost, in a comfortable heated space, with free piping hot cups of tea and snacks between acts. He recalled that last year, the audience that sat till the end was truly satiated; they said the experience of hearing classical musicians  of different gharanas and styles continuously for 9 or 10 hours was a unique experience.