Raga Malhar and its myriad moods

Malhar is a raga that is said to bring rains, and is traditionally played in the monsoons or pre-monsoons. 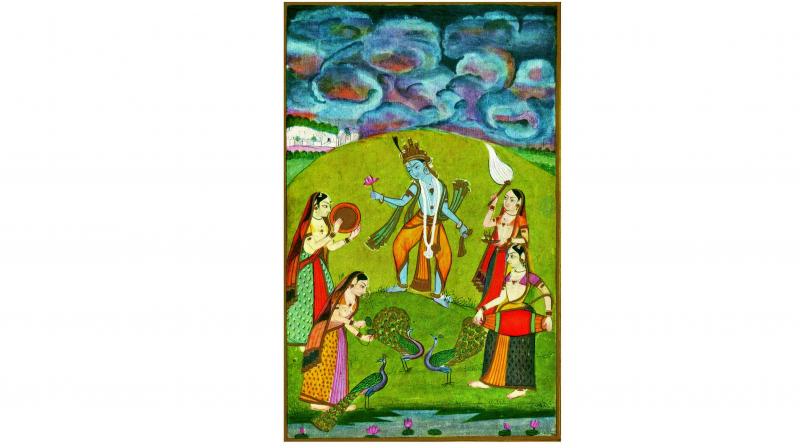 As the monsoons hit India, one eagerly looks forward to hearing the several extant raga malhars that exist all over North India. Malhar is a raga that is said to bring rains, and is traditionally played in the monsoons or pre-monsoons. This is prevalent in all gharanas, instrumental and vocal.

It appears that mallar or what is today called Shudha Malhar existed before Tansen’s time but without the two nikhads (ni). It was Tansen who introduced the raga in its current form, and it is this form of malhar, called Mian Malhar (Tansen was known as Mian Tansen) that is said to bring about rain. There is a mention of malhar even in the Sikh scripture, the Guru Granth Sahib, which lists several ragas in the ragamala, at the end of the scripture.

Strangely, there seems to be no comparable Raga Malhar in the Carnatic tradition, according to world renowned flautist Shashank Subramanium, “however, there are ragas, like Megh, but the treatment is totally different. There are many scales that have similar first half or second half of scales but are not referred to as Malhar”. Sudha Raghunathan, one of the finest Carnatic vocalists today, talked of her rendering of the Carnatic Raga Amruthavarshini, which is said to bring the rain —when she performed it in Doha recently, it continued to rain steadily for a week after her concert, and the organiser rang her up asking if there was a raga that could stop the rain!

There are several malhars, their listing is not universally agreed upon, with different gharanas having different histories of how many malhars there are.

According to one Senia tradition, the 12 malhars are Mian Ki Malhar; Surdasi Malhar (said to be composed by the blind singer saint Surdas); Ramdasi Malhar (a composition of the minstrel Ramdas —again in three extant versions, with shudha gandhar, komal gandhar and both gandhars); Gaur Malhar (a combination of Malhar and Gaur — this too is said to be of three types according to both Gwalior gharana doyens Pt L.K. Pandit and Shahjahanpur Senia sarodiya Pt Narendra Nath Dhar); Meera Malhar (composed by saint Meera Bai); Megh Malhar (combination of malhar and another monsoon raga Megh); Tankdasi and Terdasi Malhars (both now totally extinct, but listed in a private 19th century music journal in Gurmukhi belonging to a Senia ustad); Nat Malhar (a combination of Malhar and Nat); Charju Malhar, said to be composed by Nayak Charju; Dhulia Malhar, now very rarely played; and lastly, Sawani Malhar, today practically extinct, though one has heard of Ustad Amjad Ali Khan playing Sawani Malhar some years ago, and Pt L. K.
Pandit confirmed his family has a few compositions in Sawani Malhar.

Arguably, Mian Malhar helps to bring about the rain. Ustad Wasifuddin Dagar, a 20th-generation musician in an unbroken line descended from Swami Haridas’ lineal line, puts it: “Why should one disbelieve a tradition that has been handed down through the generations? I have personally not heard Mian Malhar bring about rain, but I have heard of an incident when my uncle Ustad Nasir Zahiruddin Dagar stopped singing Mian Malhar and told his disciple who was listening to him, to go home. By the time the disciple stepped out, it had started to rain copiously!”

Ustad Shujaat Khan, noted sitarist, and an enviable musical pedigree of belonging to the pre-eminent sitar gharana of India, disagrees, “films have created this myth of Mian Malhar bringing rain; while I agree that certain notes are conducive in creating certain moods — definitely morning ragas bring about images of dawn, light evening ragas create a lyrical romantic mood, etc.; I don’t really see it raining if Mian Malhar is performed. Having said that, there are lyrics which talk of clouds and rains and jhulas (swings), notes which you now associate with the monsoons. I remember hearing Sur Malhar sung by Ustad Amir Khan (in an auditorium), and I could virtually see the wet green trees, could even smell the parched earth, which had just been drenched by the first drops of rain. So imagery is very important. I personally play Gaur Malhar a lot. ”

Purbayan Chatterji, distinguished scion of the Senia Maihar instrumental tradition, popular for his experimental and collaborative musical forays talks about “the debate about “cultural conditioning”, regarding the effects of ragas. But I truly believe in the power of notes, and how universal and empirical the emotions are, that are elicted by them. When I play Mian Malhar, I truly feel the rains every time. Maybe its because my mind is conditioned to do this, but the truth is I feel it, and so do many listeners. Recently, I performed in Hyderabad, and it was a hot sunny day, but I chose to play Mian Malhar, and I heard it rained that evening! Either the Heavens heard me, or I read the forecast…”

Perhaps a more considered explanation could be that unless the treatment of the notes is perfect, the exact effect (asar) is not induced, and the rains don’t get coaxed. In North India, one looks forward to hearing the different malhars this season; there are several festivals that focus on Malhar.