Although the genre that the band plays can be broadly called ambient rock/alt, they were inspired by different genres. 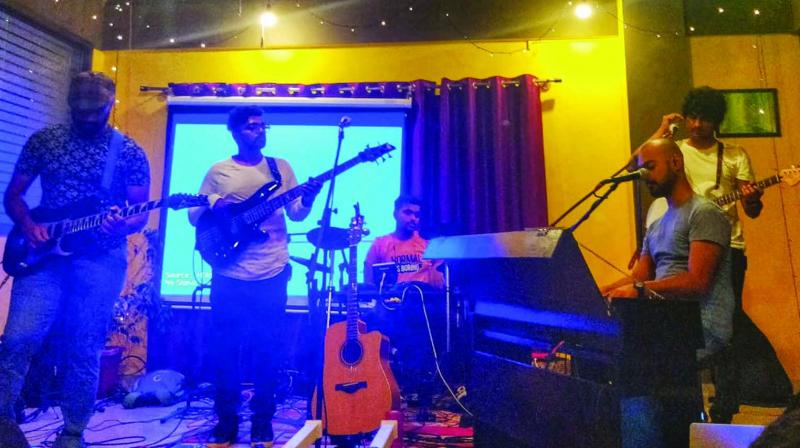 When you perfect a project for a long time, the outcome can either be insanely good or ridiculously over-thought. Fortunately for The Sahej Project, their studio album Reminiscence a Lost Canvas which took four years in the making, falls in the first category. The band focussed all of their talents and energies into the album and recently debuted it in Bengaluru.

Initially a closed-door project between Hreedish Kakoty and Nukul Mehra, The Sahej Project had a very different line-up back then. Hreedish narrates their start-up story, “Nukul and I initiated this as a song-writing project. Seeing the potential our songs had, we formed the band. Varun Ramachandra and Nikhil Kotibhaskar then joined us. The two new guys brought in new flavours and we started jamming together, doing live gigs.”

Among the songs that they wrote, they felt that a few just had to be part of an album. “We started re-writing the songs, improving them, setting up our own home studio, learnt music production and mixing,” he recalls, revealing that for the last two years, they stopped playing live and focused entirely on the album.

Currently, the band comprises Hreedish Kakoty (vocals and piano), Appilineni Kushal (lead guitar), Varun Ramachandra (guitar and backing vocals), Saravana Gowtham (bass) and Anmol Kini (drums). The genre that the band plays can be broadly called ambient rock/alt. But while writing the album, each of them were inspired by different genres. Hreedish busts the myth about ambient rock having beats that are repetitive: “It’s a very crude way of defining ambient rock. The term is very subjective. A lot of tinkered music that does not have repetitive beats can also be called ambient rock. All of our music is done live and not programmed.”

Understandably on tenterhooks as it’s their first album, the band is eager for feedback.”Some of our friends have listened to it and really appreciated the music. I think the nervousness stems from the fact that we don’t know how the audience will take it. Our songs and song-writing are quite different from what you would generally find in the independent music scene,”Hreedish says, hoping that people will receive it well.

Hreedish tells us how the album was conceptualised: “We wanted to make an album that tells a story that means something. The music talks about an individual who is on an endless journey. The songs cover different phases of his conscious.” Meanwhile, Kushal discusses the inspiration behind the songs, “There is definitely a musical aspect to it. As creative people, we have always wanted to come up with songs that appeal to us. The lyrics were inspired by a lot of personal events. There are songs written about love, distance… basically, people who have seen a lot. These songs are about things that we have gone through.” The band wanted to create something that is personal, creative and has the potential to connect with their listeners and they seem to have found their groove.

So, what’s next for them? “There are a lot of songs that we came up with in this two-year period that did not make it to the album. There is a lot of material that can potentially make it to an album or be released as an EP,” Kushal concludes.