Hat tips to social media, talents are en route to recognition and appreciation. 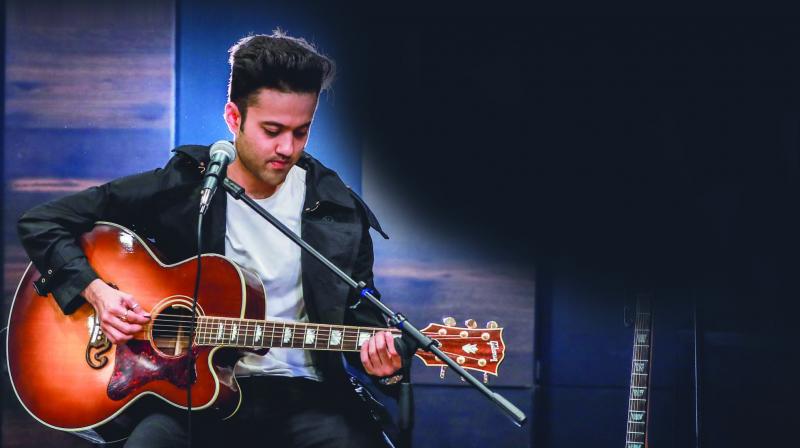 Aaryan, whose song landed on Youtube a few days ago and went viral instantly, is no exception to the rule. In an open chat, the music enthusiast speaks of his journey and more.

24-year-old singing sensation Aaryan is the new kid on the block. Though his first song has gained immense popularity on social media, he is a humble soul. In a lively conversation, he shares his journey of transformation from a sports management student to full-time musician.

Stepping into the industry
I always loved singing, but first delved into it at the age of 12. Things started unfolding when I began performing live during my graduation days in Cardiff Metropolitan University (United Kingdom). I started getting a good response and, soon after, I was back to India to train under the mentorship of Sri Kumar Mukherjee and Pradyumna Singh Manot in Hindustani Classical and Western music, respectively. I knew I had found my true calling and my yearning to explore more in the music industry has just been growing.

Looking up to the legends
I have been writing, singing and composing songs since I can remember. I knew I wanted to pursue music professionally, but didn’t know how to get cracking. That’s when I found my inspiration in John Mayer and his composition Gravity. This drove me with the desire to bring back the charm of rock ballad, which was lost in the space of other music genres. If I owe the credit of learning guitar to anyone, I’ll dedicate it to Mark Knopfler and Dire Straits.

On his way to creativity
There’s nothing quite like writing, singing and composing my own music while still being surrounded and guided by encouraging, talented and positive folks from the industry. There’s no particular set of process that I follow — music for me has always been free-flowing, often swapping chords back and forth, but finally hitting the right spot to match the verses. Music has a different power — it makes me write in the early hours of the morning, record a demo when everyone is asleep, and work around the same track for months in a row to achieve the best form. It’s safe to say: my creative process knows no direction, only the final destination.

Passion before profession
Music is an experience, not just a hobby or profession. What I enjoy the most is the whole process: I can write what I feel, adapt when needed, and learn different forms without worrying about judgements, biases, or prejudices. Being a musician enables me to be as expressive and creative as I like. It also gives me a chance to make a difference and bring smiles on people’s face using sound, words and expressions to narrate a story that they can relate to. The thrill of being on stage, meeting people from different corners of the world, and creating something that didn’t exist before triggers my passion to be a better musician each day.

How the audience’s heart was won
In the process of discovering byways and highways, making music on and off the road or in the studio, and tapping into classical and Western musical forms, I knew I could become the best only when I would create my own song — whether it is writing, composing and performing it. From thereon, my journey to creating Yaadein began. When I first put the song out there, I felt I could do more, but I also realised people really loved the composition. It was humbling to see that people accepted and appreciated the song for its simplicity, relatability, and authenticity!

Touching a new height of success
Yaadein is my first song and is super special to me. I wanted to compose something that is melodious, slow-building, and soothing at the same time. On the journey of exploring music, learning new forms, and experimenting old styles with a new take. Since releasing the song, people have reached out to me through different platforms with words of acceptance, appreciation and love.

Inclined towards…
I have an immense lure towards rock ballad genre, which has now become a thing of the past. To revive its charm and introduce this form of music to the young generation which is less familiar with the genre, I worked on my first song — only to realise how well it fits
the bill.