Musical high by the dharavi duo

Dopeadelicz, a multi-lingual rap duo from Mumbai, sing about a range of issues, from socio-economic inequalities to legalising marijuana. 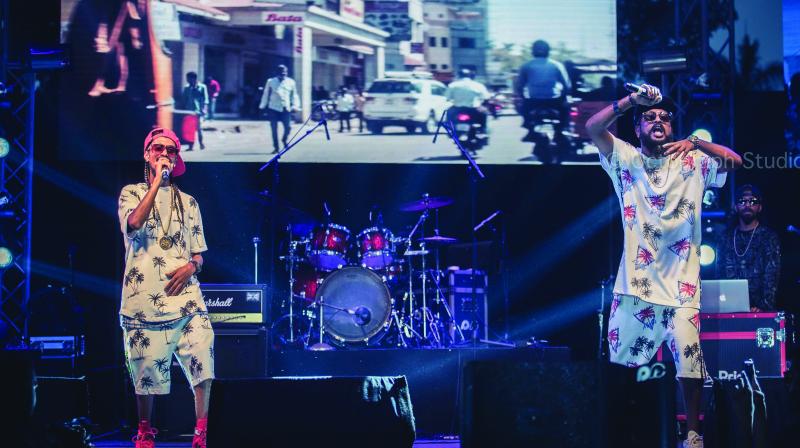 From rapping in Dharavi’s gullies to performing in a film, starring superstar Rajinikanth, Dopeadelicz, a rap duo from the streets of Dharavi, has come a long way. Dopeadelicz was formed in 2012 and is made up of Tony Sebastian aka Stony Psycho and Rajesh Radhakrishnan aka Dope Daddy, who hail from the Matunga Labour Camp area in Dharavi.

If the name of the rap duo did a number on you (420, to be precise) well, it’s because the members feel passionately about the issue of marijuana legalisation. Their song, Legalise It, which has over two lakh views on YouTube, narrates the positives of the ‘herb’.

Tony says, “India considers marijuana to be a drug, while in other countries, it’s grown like a crop. Marijuana consumption has many merits, but people don’t see that. However, there is an appropriate time for things, and right now, the time is not yet right for legalising marijuana in our country.”

However, there’s more to the rap duo’s songs than marijuana. A lot of their rap captures the pulse of Dharavi and the social issues rife in the area like discrimination, rehabilitation, police harassment, caste problems, etc. In fact, it was this need to represent their reality that drove them to write rap songs. “Listening to the lyrics of other rap artists made us realise that we too could use rap to talk about our problems. Hip Hop music emanating from the ghettos, is the perfect genre for commenting on issues. We cannot write petitions to politicians, but we can rap about our problems and inspire the younger generation to stay alert,” says Tony Sebastian. To make their music accessible, the duo rap in English, Tamil, Hindi and Marathi.

Rappers Tony and Rajesh draw heavily from their personal experiences when penning lyrics. Giving an example, Rajesh says, “Our latest release, Vayapothuda, is for the people who criticised us, called us junkies and thought we would do nothing with our lives. In the song, we say we’ve made it and that we don’t need their false praise now.” He also recalls how he experienced discrimination from the time he was in school.

“The students from Dharavi were made to sit in a different division,” he says. But it is this bias that has motivated the duo to promote Dharavi in a positive light. “People have a negative opinion about Dharavi. But it’s a place thriving with artists and industries. Through our work, we want people to see that there is more to Dharavi than slums,” says Rajesh.

And it is hard to not notice their work, for after performing on MTV Coke Studio, at the YouTube FanFest, at the Global Indian Music Awards in 2015, and several concerts around the country, the duo recently got a chance to pen songs for Rajinikanth’s latest film, Kaala. The duo wrote four songs in all, which are titled, Semma Weightu, Nikal Nikal Chalte Re, Poraaduvom and Thiruvilakku. Talking about the title track, Semma Weightu, Tony says, “In the movie, Rajinikanth is a sort of slumlord who solves everyone’s problems. Since we are from Dharavi, the director wanted us to infuse the track with our experience of living in Dharavi.”

Despite the attention and applause, the rap duo feels they still have a long way to go. “Everyone would say music is life, but I’m putting my life into music to create a benchmark for the coming generation. You have to have big dreams,” says Tony. Rajesh wants Dopeadelicz to be an inspiration for upcoming rappers in their locality. The duo is currently working on their first music album, which will have 14 tracks. “We will be collaborating with artists across the world, like Tamil rappers from India, Malaysia, U.K. and other countries. We will also be featuring other genres like reggae, rock and jazz. We want to bring together different kinds of music and infuse rap into it,” reveals Tony.