Full of energy and vigour; this Irish band is set to take Indian music buffs on a soulful journey as part of their India tour. 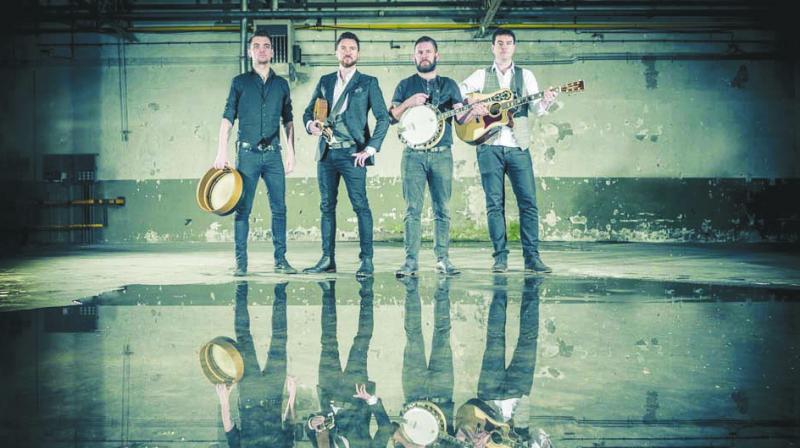 A traditional Irish folk and ballad band, The Kilkennys are known for their energetic performances and charismatic rapport with audiences across the globe.

The band was established between schoolmates and began touring the length and breadth of Ireland in 1998. In 2008, they decided to name themselves as The Kilkennys after their beloved home, the Kilkennys city. The Kilkennys in association with Jameson Irish whiskey are performing for the first time in India. The band consists of Robbie Campion, Davey Cashin, Tommy Mackey and Mick Martin. They are now based in South-east Ireland. Their Indian tour with Jameson, much like the whiskey brand will seamlessly blend traditional and modern day Irish aesthetics and seek to capture the heart of the traditional music lover, as well as re-introducing Irish music to a younger audience.

“It feels great to be in India, it is a wonderful country, very different from Ireland and there from where we come from. It is great to experience new cultures, new people and new sights. We are looking forward to performing here over the weekend,” says Davey Cashin, lead vocalist of The Kilkennys.

“We are a long time on the road, initially we started off in school – my brother and my friend Tommy who is now in the band. We started off in school in Kilkenny and there we had guitars, banjos and we sang songs. Over the weekends we went over to the local pubs and bars and we made pocket money. We left school after giving our final exams as we decided we want to be a professional band and do this full time so we have been on the road and performing all over the world since,” he continues.

“I am the lead vocalist. I sing all the songs and we also have other instruments. We have the Irish hand drum, banjo and guitar and the list goes on,” he adds.

“We were in India last year and we had an excellent response from the audience and that is why we were invited back for a second year. So we know what to expect and every year when we come to India we expect the audience to get bigger and bigger. I read on the newspaper today that Bryan Adams performs in India and he loves it. I feel the very same. So maybe one day we will be as big as Bryan Adams in India,” he says in a hopeful manner.

Upon being asked whether music was his passion since childhood, he replies saying, “In Ireland there are a lot of folk musicians. So as a young boy growing up in Ireland we would be listening to all the Irish folk musicians and my father is a folk singer who still sings today all over Ireland, and he was my main inspiration for singing and performing the way I do today.”

“We say our music is from age 8 to 80, and everyone in between and they all can listen to our music, everyone can dance along and clap along and if you know the words you can sing along. There is something for everybody and it is great fun, the energy and all. We love to have fun in Ireland and I feel in India people like to have fun too. So we would all have a big Irish party here in India this weekend. I think the response is going to be fantastic. We are looking forward to having some good Irish fun,” he replies when asked about what is the target audience, as in the age group they are targeting.

Talking about the genre they play he mentions “Our genre would be called Irish folk and traditional music. I love Irish folk music because it has a wide spectrum – fast songs, slow songs, instrumental music, and also original musical arrangements made by ourselves. We are currently on a world tour at the moment so we did a show in Denmark, just before we came to India. Before Denmark we were in Switzerland in Europe and before that we did Scotland and England and once we are done with India we will go to Germany and Holland. That brings us right to December when we will be back home in Ireland for Christmas until the new year. In the whole tour India was out next stop.”

“I feel Irish music will be fantastically appreciated in India. India has amazing traditions and culture and the very unique people. It is the same in Ireland. We have a unique culture and traditions and thats how we can appreciate the culture in India, and Indian people appreciate our culture in Ireland. So I feel we will be received well here and we are looking forward to playing here. It was me and my brother who decided to form a band along with Tommy. It started around very informally as we played around with songs, messing up songs, he laughs and we realised that this is good fun and let us turn it into a career. It makes a difference when your job is good fun. Since a very young age I have been passionate about music listening to my Dad singing and I knew that is what I wanted to do.”

“In 2019 we will record a new album. This tour we are promoting our album which is called ‘Blowing in the wind’. That is our latest album and we are promoting it over this tour. I am open to all kind of different music as well as one has to keep an open mind to come up with original ideas,” he signs off.