Arjun Kapoor is light and breezy, and Anil Kapoor as Kartar is excellent. He is the film’s emotional and loony core. 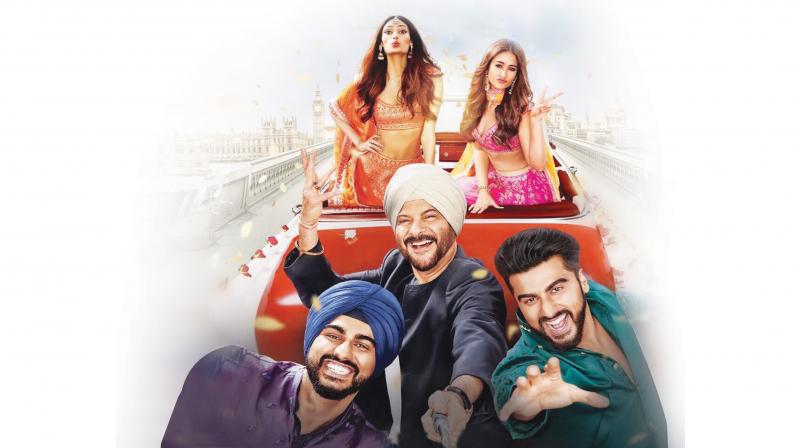 Still from the movie Mubarakan.
Rating:

If someone were to go around conducting a community-wise survey to unearth the reasons why families do pakki-kutti with their loved ones, Punjabis would stand tall for having the most epic quarrels and enmity over the most trivial things. Surveyors would also find that most of these tiffs are located in some matrimonial scenario.

I remember a wedding where all the baratis were mighty miffed and blessing the innocent, gori-chitti, new-new bahu with such dripping scorn that one would have thought she had tiptoed into their rooms at night and cut offs all straps of all bras.

But no. The reason was that the new bahu’s family had served rajma twice to the baratis, the boys’ side — once on arrival, and once the next afternoon.

They might as well have collected every bra and underwear that the baratis possessed, made a bonfire and made the bride do laavan-pheras around it in a black bra-panty.

In the land of puttars and papajis, the moonch matters above all. And it reacts instantly, either by wilting sadly, soaked with heartbroken tears, or quaking vigorously with anger at the slightest, often perceived besti.

I don’t know who handed the results of one such survey to Anees Bazmee, but his Mubarakan could not have been more true or more lunatic and funny.

There’s prerequisite though, to enjoying Mubarakan. If you don’t get Punjabi, I mean their language-shanguage and habits-vabits, you’ll wonder why some people in the hall are guffawing so hard that the entire row is shaking.

One day in England, in a tragic accident, one brother (Sanjay Kapoor) dies along with his wife, leaving his two judwa sons to his younger brother, Kartar Singh (Anil Kapoor).

But bachelor Kartar can’t handle two infants, so he hands one to his UK-resident sister Jeeto (Ratna Pathak Shah), and packs off the other to his brother Baldev (Pawan Malhotra) in Punjab.

Karan loves Sweety Gill (Ileana D’Cruz), and Charan loves Nafisa Ali Khan (Neha Sharma), but neither has the jigra to tell their parents.

Obvo, Jeeto has an encounter with Sweety in true SRK-Amrish Puri style (DDLJ), and Baldev, well, since he won’t serve anything Mughlai at his posh Purani Haveli dhaba, he’s not likely to allow Charan to bring home Razia Sultan.

Bechara Charan confides in Kartar about g’friend Nafisa, and chachu throws a druggie twist in the midst.

This leads to the film’s big, blistering syappa!

Someone falls, there’s some name-calling followed by silly confusion over a barking dog. At the end, Baldev is giving angry-and-hurting-with-besti look to Jeeto, whose innards are in flames with memories of her jawani spent bringing up little Baldev who is now making her see this worst-day-of-her-life-ever.

In true Punjabi style, big-big challenges are given to self to spite the other. And this is duly followed up by days and nights when men have too much sharaab and women keep folding hands and giving forlorn looks to Wahe Guruji in photo-frames and up in the sky.

Since everyone’s moonch has has been insulted, and paen-praa (behen-bhai) have sworn never, ever to see each other’s bootha (face), over many more large pegs of whiskey, terrible plans are hatched by Kartar which go terribly wrong, making the confusion more complicated.

Soon, Karan is to marry Binkle, and Charan is to wed Sweety, even though Nafisa keeps screaming at Charan to do something. It looks like Charan’s paying attention, but actually, mann hi mann mein, he singing Binkle-Binkle little star…

And then, dead Veerji’s bhoot arrives, with an attendant gora angel, to show Kartar the only way forward.

In Mubarakan’s England, as was the case in Australia in Bazmee’s Singh Is Kinng (2011), the goras exist only to service the Punjabis. There’s poor Jolly, who keeps getting slapped, one druggie, some velle valets and neighbours without a life.

But the film’s strength really lies in the fact that each scene, exchange, character has a strong Punjabi flavour. There’s the shaadi ka card which looks like a 2-kg mithai box, Baldev using gargles to express his anger, a father of a bride whose only purpose in life is to hold on to his credit card till it’s needed.

Disaster — wrong boy marrying the wrong girl — is imminent all the time and attempts to avert it only makes it spiral out of everybody’s control till, in the end, some slaps are exchanged. That gives everyone a lot of maan ki shaanti and reason for a big jhappi.

Mubarakan is also a nice looking film that has a sharp tongue.

The film’s dialogue, by Rajesh Chawla, are all insult-laden sentences. Whether may be the issue or occasion, no chance is spared to abuse or offend someone.

I also liked that the writers made the judwa brothers wimpy, and their babes belligerent. The girls are smarter and cooler than the boys, and one of them even has a job. Ileana and Neha Sharma are spunky, and I’m still wondering how to say what I want to say about Athiya Shetty without sounding mean.

Arjun Kapoor is light and breezy, and Anil Kapoor as Kartar is excellent. He is the film’s emotional and loony core.

Enough has not been said or written about how fabulous an actor Mr Malhotra is. His comic timing is sharp, and here it is matched rather nicely by Ms Pathak’s exaggerated, animated reactions.

There’s such spontaneity to their interactions that they make even the stony-faced Rahul Dev seem interesting.