Arjun has done an excellent job in living up to his name, even after 149 films. 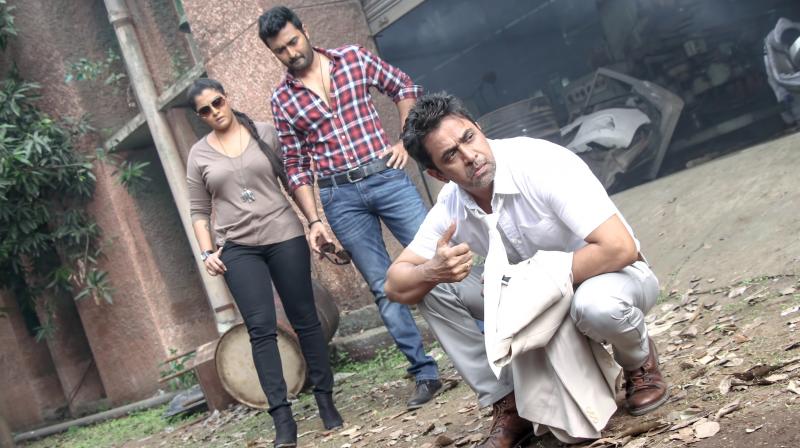 ‘Nibunan’ is a brain teaser featuring ‘action king’ Arjun. This sentence alone is a good premise for the things to follow: straightforward, easy flowing action sequences. Linear narration with a mysterious and puzzling villain. And inexplicable murders that are a cornerstone of a gripping spy-thriller. Directed by Arun Vaidyanathan, ‘Nibunan’ marks Arjun’s 150th film- a towering achievement!

The story follows the investigations of a tough and intelligent cop named Ranjith Kalidoss (Arjun). Along with his assistants Joseph (Prasanna) and Vandana (Varalaxmi,) Ranjit is initially left stranded when a box containing a blood stained doll with a perplexing number arrives at his office. Initially dismissing it as a prank, the trio soon figure out that it was a clue to uncovering a murder of a politician, which in turn further leads to two other murders that have the same trail left behind.

Following this, Ranjith kind of connects the dots and even goes further in figuring out who the next victim is going to be. He has a strange reasoning behind this, which the simple minded folks in his team and the station couldn’t possibly comprehend. Concurrently, Ranjith is also human and is suffering from Parkinson’s disease. His ability to focus on the case is greatly hindered by this, and his family comprising of his wife (Sruthi Hariharan), daughter, and brother chime in to help him out and fill a small but crucial familial angle in Nibunan. Meanwhile, the murderer carries on in his merry ways, always baiting for someone to come after him. The team continue to investigate the trail to seek answers to basic questions: why? and who is this man? These simple tropes propel the rest of the narrative. And there's suspense element in the climax.

Arjun has done an excellent job in living up to his name, even after 149 films. Sruthi Hariharan as his wife fills an important emotional void that adds depth to the story. Prasanna and Varalaxmi have decent content for supporting roles. Vaibhav as Arjun’s brother has nothing to do. Suhasini and Suman have been brought at a crucial flashback and the episode is seemingly inspired by Arushi murder case that shook the country. They both have done a decent job.

Arvind Krishna’s cinematography definitely works here. Music is hit or miss, and could have been given greater importance. Novelty and originality are probably not strong points of ‘Nibunan’, but it is at the end of the day, a fast-paced thriller that would leave you engrossed for the most part.