A Gentleman movie review: No dum in its action, no fun in its romance

The film’s writers and directors should have velcroed these two to each other’s backside, put in more feminist banter while they shot at the baddies. 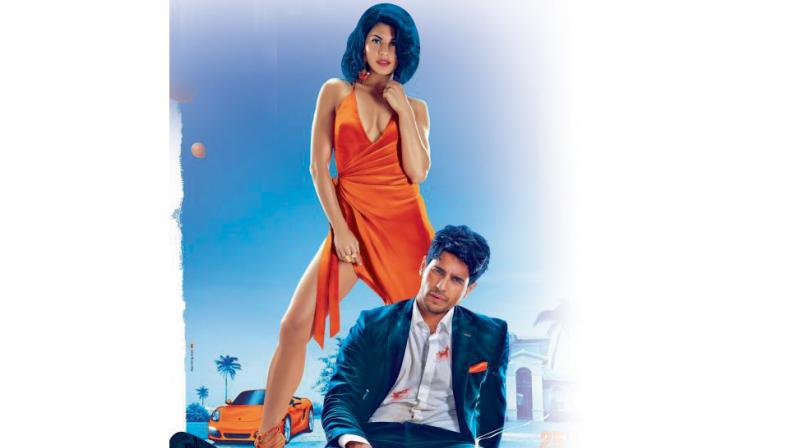 A still from 'A Gentleman'
Rating:

Bollywood is very anxious these days. Despite its carefully tiered arrangement of all-round heroes, it is fast tumbling towards a crisis.

Bollywood’s biggest stars — the 3 Khans — are 1965 born and have, at best, two-three years of action-romance left in them before the government asks them to link their Aadhaar to their SrCitizen card for rail, air and movie discounts.

The second rung, Akshay Kumar and Ajay Devgan, 1967 and 1969 respectively, may have a year or two more than the Khans.

Though the 4th rung, the Class of Early Eighties — Ranbir Kapoor (1982), Shahid Kapoor (1981) — holds out hope of good cinema, big budget, itinerant action films that’ll have hormonal boys screaming, whistling and jumping in the aisles are out of their league.

So what Bollywood is left with is the Class of Mid-Eighties: Arjun Kapoor, Sidharth Malhotra (both 1985), and Varun Dhawan (1987). Followed by that one golden, umeed ki kiran — Tiger Shroff (1990). Tiger is a done deal. Box-office likes him, but Bollywood needs more than one man who can slay evil and lehrao Bharatiya tiranga.

Kapoor is too rolly-polly to even attempt action. Dhawan can do action, but he’s more suited to small-town fisticuffs. Bachcha kaun? Malhotra.

That is why Sidharth Malhotra was first trained under Akshay Kumar in Brothers (2015), and has now been given an action film, solo with a double-role, that flits between at least three countries

Bollywood is test-driving him, checking out how he’ll do. Sadly for Sidharth, and us, it won’t work.

Don’t get me wrong. Sidharth Malhotra is lovely, charming and he can act. Only problem is that his action doesn’t rouse the beast inside me, or inside the hormonal hordes.

A man in urgent need to pee dashes out of his car and, without pulling the hand-brake, pulls down his zip.

Then, stuff happens, stuff that we could either call ittefaq with a shrug or scream “WTF!!” at.

On this pearl of wisdom squats the story of a gentleman, Gaurav (Sidharth Malhotra), who, as his colleague and pal Dixit (Hussain Dalal) rightly says, is the most depressing khush aadmi.

Gaurav is happy in a very middle class, safe sort of way.

He’s chuffed to buy a nice bungalow where matching cushions sit puffed up on beige sofas, and to exchange his Mustang for a family van. His favourite part of the house, he says proudly, is the kitchen.

The girl he is besotted with, Kavya (Jacqueline Fernandez), has friend-zoned him because he’s too safe and boring and drives a “tempo”.

Did I mention all this is taking place in Florida? Ya, well, it is.

In Bangkok, Rishi (Sidharth Malhotra) is in a tuxedo and busy blowing up a Chinese vault with the help of other eminent and heavily tattooed members of Unit X.

Run by one Colonel (Suneil Shetty), Unit X’s members are secret mission savvy. They blow up and download stuff fast, but are quicker to shoot and scoot.

Rishi, incidentally, is mildly hypocritical. He shoots many people, but has a mild attack of moral qualms when his co-worker Yakub (Darshan Kumar) shoots an innocent family-walla. This is actually euphemism for “I want out”.

Rishi doesn’t like this life. Every time he lands with a thud, he says, “Jhand hai meri life”.

Rishi craves a normal life with a happy family. And now that some good Indian government people are saying very bad things about Colonel, it seems like a good time to quit.

Meanwhile, safe and dull Gaurav is sent to India on assignment and that WTF/ittefaq stuff happens. But only after Rishi engineers a gay encounter with a one Secretary Mishra.

Spurning oily, slithering gays, apparently, is the only definitive test Bollywood writers can come up with to burnish their heroes’ mardangi credentials.

So, are Rishi and Gaurav judwas or just humshakals who will now go on an exchange programme, a la Ram/Shyam, Sita/Gita?

Or it is a Shahenshah-like situation — corporate cuckoo in Florida, badass assassin in Bangkok?

Who cares? It’s all one big stupid plot with so many absurdities that if you were to dwell on them, you’d want to lead the existential interrogation of Bollywood yourself.

That’s why The Gentleman — by director buddies Raj & DK who made Shor In The City and the best zombie film ever, Go Goa Gone — needs good-looking people living in lovely spaces, driving dream cars in dream locations to keep us distracted and dwelling on our own failed diet-gym vows.

All this prettiness is necessary because there’s little else in this romantic-action film apart from thain-thain, boom, crash, thud!

Which is sad because in one scene, where Kavya tells a boy not to whistle for her but scream “help”, we see with stunning clarity what this film should have been about.

And she, in fact, has a body more aching for action than he does.

The film’s writers and directors should have velcroed these two to each other’s backside, put in more feminist banter while they shot at the baddies.

While, of course, Dixit provided entertainment via real-speak from the margins.

The action should have been peripheral to their romance, not the centrepiece.

That was also necessary because while Malhotra has a mean body, a killer machine it is not.

In any case, the key to action is not how high your legs go, or how fast and high you can fly or fling other people. It’s about being able to project intent and anger.

Action is not so much about acrobatics, as it’s about projecting visceral grit.

Sadly, Malhotra can’t do that. Malhotra tries to act in action scenes. That’s as pointless as using scented toilet paper.

Action-romantic films can be great fun. But for that it needs a hero who, without even a pencil sharpener in his back pocket, can intimidate an army of trained, armed goons.

It’s all phoney, we know. But we’ve bought a ticket and we want to believe.

Malhotra is efficient and entertaining throughout. Including in action sequences. But I’d rather that he just stood in his kitchen sipping coffee and smiling at me.