Made In China movie review: Neither a comedy nor a satire

Starting off with a promise, Made in China slips into overworked and unsophisticated mediocrity from where it never surfaces. 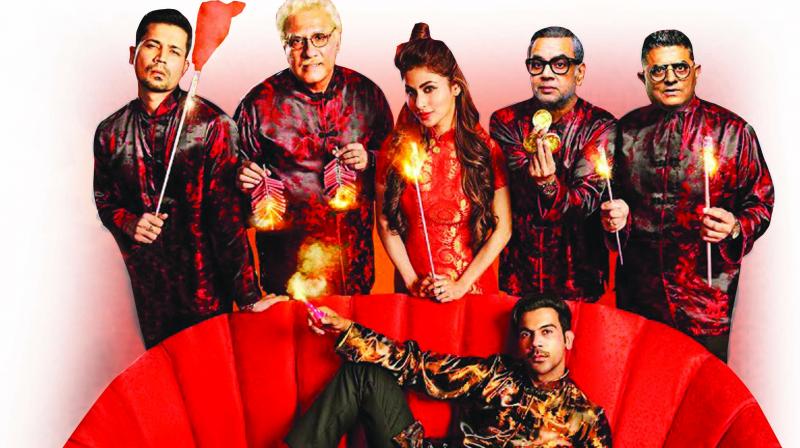 There is also a problem with characters not sticking to their balanced graph.
Rating:

There are films that seem to have clarity of vision as well as execution as far as their principal purpose for making a film goes. Mikhil Musale’s debut in Hindi, Made in China, looks like a script that has undergone several changes, mainly perhaps since the director looks confused about his offering.

Starting off with a promise, Made in China slips into overworked and unsophisticated mediocrity from where it never surfaces.

Raghu (Rajkummar Rao) is ambitious and pulls out many tricks from his overused bag of an anticipative list of possible business ventures to succeed in life. Having failed to strike it rich more than a dozen times, he could have collapsed. But his determined spirit makes him try out yet another enterprising business idea the nth time — to sell a branded aphrodisiac well bottled to provide the ultimate pleasure for all those for whom marriages or marital love spell doom.

Kicking off with an incident where Chinese general Zhang gets killed after consuming tea at an Indo-China cultural summit in Ahmedabad, it sets a base that has all the makings of a thriller as one waits to see what unravels next. Soon, we are introduced to Raghu (Rajkummar Rao), who has had a most unsuccessful run of luck with abortive attempts at selling emu eggs, water melons, roti makers and Nepali carpets. Why he would be bundled off to China to assist cousin Sumit Vyas to get into yet another business deal is unexplained to us. Nearly every half-hour into the film, one begins to wonder where the film is directed, as the film consistently fluctuates and alternates between various genres.

There is also a problem with characters not sticking to their balanced graph. With Raghu, the sudden twists may be unexpected but he seems to follow his heart with a resolute spirit. For him, what really matters is a way to give his fellow Indians some better sex. But when he does show up to lay his hands on a business deal selling aphrodisiac and great imaginative and inventive backing from sexologist Dr Vardhi (Boman Irani), things begin to fall in place. On the pretext of selling Chinese fans, Raghu hides his real business from all his close associates, including his wife. Overnight he assumes confidence to reach the top of the game with a steady overflow of purchasers, and tastes huge success for the first time in life. Obviously, with so much money there is bound to be a steady stream of troublemakers too, and soon, his wife, Rukmini (Mouni Roy), and later uncle (Manoj Joshi), not to forget his cousin Vyas get wind of Raghu’s immoral way to earn a living. Raghu questions the morality of all those critica
l of his job. He asks his wife, “When others benefit from it (love potion and stimulant), you get impressed. The moment you get to know that I am the reason for the sudden improvement in their sexual prowess, you begin to doubt and question my intentions?”

Yet again, Made in China loses track of its original satire, which I thought was a satire that underlines our semen of two-facedness, being dishonest with one’s self, and the hypocritical ways of accepting a hard reality.

In a way, the film’s 129 minutes of screen time mimic the lead character Raghu’s predicament, or the number of many schemes he starts off with to get rich. Alternating between different genres, it falls flat and never recovers from the corny, cliched treatment that nearly all Hindi films end up with.

What remains a must watch though is Rajkummar Rao’s terrific performance. Even Irani, who nearly always hams, is a trusted aide here. Vyas, who is underutilised, and Paresh Rawal and Gajraj Rao have small roles and do their utmost to leave their mark.

Tags: made in china movie review